What the Fight Over Capital Gains Is Really About [VIDEO]

Why would the economy grow faster if we got fundamental reform such as the flat tax?

In part, because there would be one low tax rate instead of the discriminatory and punitive “progressive” system that exists today. As such, the penalty on productive behavior would be reduced.

In part, because there would be no distorting tax breaks that lure people into making decisions based on tax considerations rather than economic merit.

In the wonky jargon of public finance economists, this means we would have a “consumption-based” system, which is just another way of saying that income would be taxed only one time. No longer would the internal revenue code discourage capital formation by imposing a higher effective tax rate on income that is saved and invested (compared to the tax rate on income that is consumed).

Indeed, this is the feature of tax reform that probably generates the most growth. As I explain in this video on capital gains taxation, all economic theories—even Marxism and socialism—agree that capital formation is a key to long-run prosperity.

But that doesn’t mean there’s an easy path for reform. The Hill reports on some of the conflicts that may sabotage legislation this year.

The fight over a border-adjustment tax isn’t the only challenge for Republicans in their push for tax reform. …Notably, some business groups have criticized the proposal to do away with the deduction for businesses’ net interest expenses.

The border-adjustment tax is probably the biggest threat to tax reform, but the debate over “carried interest” also could be a problem since Trump endorsed a higher tax burden on this type of capital gain during the campaign.

Here are some excerpts from a recent news report.

“Donald Trump vowed to stick up for Main Street over Wall Street—that line helped get him elected. But the new president has already hit a roadblock, with fellow Republicans who control Congress balking at Trump’s pledge to close a loophole that allows hedge fund and private equity managers to pay lower taxes on investment management fees.

…The White House declined to comment on the status of negotiations between Trump and congressional Republicans over the carried-interest provision.

…U.S. Rep. Jim Himes, D-Conn., a House Financial Services Committee member and former Goldman Sachs executive, said there is chaos on the tax reform front. “That’s on the list of dozens of things where there is disagreement between the president and the Republican majority in Congress,” Himes said.”

Regarding the specific debate over carried interest, I’ve already explained why I prefer current law over Trump’s proposal.

Today I want to focus on the “story behind the story.” One of my main concerns is that the fight over the tax treatment of carried interest is merely a proxy for a larger campaign to increase the tax burden on all capital gains.

For instance, the ranking Democrat on the Senate Finance Committee openly uses the issue of carried interest as a wedge to advocate a huge increase in the overall tax rate on capital gains.

The statists at the Organization for Economic Cooperation and Development also advocate higher taxes on carried interest as part of a broader campaign for higher capital gains taxes.

For those wanting more information, here’s the Center for Freedom and Prosperity’s video on carried interest.

Last but not least, wonky readers may be interested in learning that carried interest partnerships can be traced all the way back to medieval Venice.

“Start-up merchants needed investors, and investors needed some incentive to finance the merchants. For the investor, there was the risk of their investment literally sailing out of the harbor never to be seen again. The Venetian government solved this problem by creating one of the first examples of a joint stock company, the “colleganza.” The colleganza was a contract between the investor and the merchant willing to do the travel. The investor put up the money to buy the goods and hire the ship, and the merchant made the trip to sell the goods and then buy new foreign goods that could then be brought back and sold to Venetians. Profits were then split between the merchant and investor according to the agreements in the contract.”

Fortunately for the merchants and investors of that era, neither income taxes nor capital gains taxes existed. 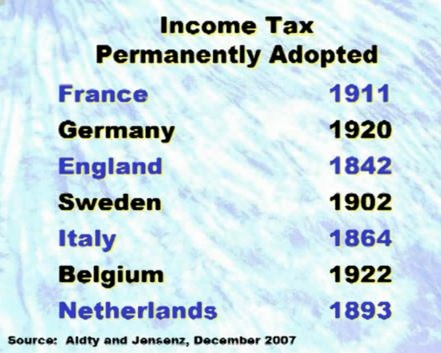 P.S. Italy didn’t have any sort of permanent income tax until 1864. Indeed, most modern nations didn’t impose these punitive levies until the late 1800’s and early 1900’s. The United States managed to hold out until that awful dreary day in 1913. It’s worth noting that the U.S. and other nations managed to become rich and prosperous prior to the adoption of those income taxes. And it’s also worth noting that the rapid growth of the 18th century occurred when the burden of government spending was very modest and there was almost no redistribution spending.

P.P.S. Now that we have income taxes (and the bigger governments enabled by those levies), the only silver lining is that governments have compensated for bad fiscal policy with better policy in other areas.

This article appeared at FEE.org at:  https://fee.org/articles/what-the-fight-over-capital-gains-is-really-about/