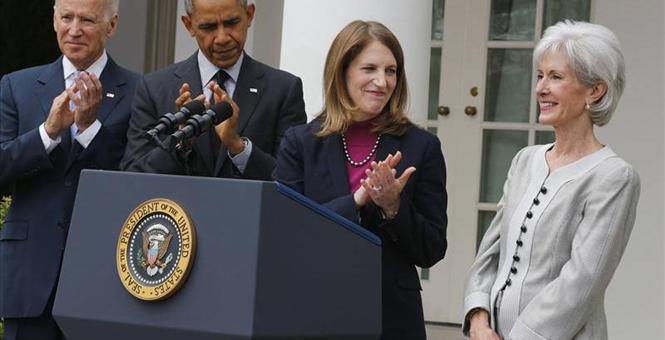 Townhall – We’ve been throwing cold water on the administration’s so-called exchange “enrollment” figures for months, and for good reason: They’re incomplete to the point of deception. The Washington Post reported back in November that official tabulations were including anyone who’s “selected a plan,” which is the equivalent of placing an item in a virtual shopping cart online, regardless of whether the check-out and payment steps ever took place.

At Kathleen Sebelius’ behest, the House Energy and Commerce Committee contacted every insurer listed as a participant in the federal exchange at Healthcare.gov in order to discern how many of these “sign ups” translated into paid enrollments. The initial batch of information, based on data through mid-April, revealed a paltry payment rate of 67 percent. When the official totals are finally revisited to include the state exchanges (whose performances are widely varying), and numbers from the late sign-up surge, the final payment statistics will likely shift. Some large insurers testified today that they’ve experienced payment rates in the low-80s range, which is closer to experts’ estimated ballpark prior to the release of the committee’s report — problems with which we highlighted here. What is almost certainly the case is that the genuine enrollment figure is seven figures lower that the White House-touted one. Phil Kerpen catches yet another inflationary ingredient in HHS’ propaganda brew, the extent of which we don’t yet know:

The existence of some significant number of duplicate enrollments isn’t a surprise to anyone who’s been following Obamacare’s implementation process. While Healthcare.gov’s front end was collapsing over the first few months, many would-be enrollees’ sign-ups were sucked into the website’s black hole. Unsure about whether any of their information had been transmitted, consumers were encouraged to go though the process again. Some did so multiple times. The screenshot in that tweet comes from a report prepared by America’s Health Insurance Plans (AHIP) for Congress. It confirms that “many” of the sign-ups being celebrated as “enrollments” are in fact various iterations of the same person’s enrollment efforts. Phil asks “how do you not even [de-duplicate]?” The answer is pretty straightforward: The online “reconciliation” system that would perform this Herculean task through automation is still under construction — and may not be ready for months (beyond the eight months that have already elapsed). That’s why the administration’s enrollment statistics are useless in the aggregate. They just manufactured the largest-sounding number possible and heralded it as exciting proof that the “law is working” and the “debate is over.” Much of the media blindly repeated the number, some going so far as to pant excitedly about an Obamacare “winning streak.” As we noted earlier in the week, the American people have obstinately declined to hop aboard that bandwagon:

Obamacare is as unpopular as ever (41/55), with a 17-point intensity gap on the question. The law’s much-hailed “winning streak” has failed to materialize in public polling, as its “accomplishments” appear increasingly dubious. Average Americans do not share Democrats’ misplaced triumphalism. Quoth Pew, “the share disapproving of [Obamacare] is as high as it ever has been in the four-year history of the law.”

We’ve seen fresh warning signs of the bad news yet to come: Additional cancellation notices and major premium increases, disproportionately impacting consumers in the small group market. The Las Vegas Review-Journal story offered a stark reminder of what’s on tap, but again, none of it is a surprise. The administration itself acknowledged earlier this year that the vast majority of American small businesses would experience increased costs due to Obamacare. I’ll leave you with a health insurance CEO discussing whether or not the new law is reducing “uncompensated care” and Emergency Room visits — which was one of its many selling points:

The definitive study on this question has shown that Obamacare (particularly through expanding the broken Medicaid program) is making this problem more acute, not alleviating it. Massachusetts experienced the same uptick under Romneycare. Politicians should retire this talking point because it is empirically false.