Update (1835ET): CNN has suspended Chris Cuomo indefinitely following the release of new documents this week that reveal he leveraged media sources to help dig up dirt on his brother’s accusers.

“The New York Attorney General’s office released transcripts and exhibits Monday that shed new light on Chris Cuomo’s involvements in his brother’s defense. The documents, which we were not privy to before their public release, raise serious questions,” the network said in a Tuesday statement. “When Chris admitted to us that he had offered advice to his brother’s staff, he broke our rules and we acknowledged that publicly. But we also appreciated the unique position he was in and understood his need to put family first and job second. However, these documents point to a greater level of involvement in his brother’s efforts than we previously knew. As a result, we have suspended Chris indefinitely, pending further evaluation.“

Authored by Zachary Stieber via The Epoch Times,

CNN is reviewing material released Monday that showed host Chris Cuomo was not truthful to viewers when he told them in August that he did not speak to fellow media members about the scandal that engulfed his brother Andrew Cuomo.

“The thousands of pages of additional transcripts and exhibits that were released today by the NY Attorney General deserve a thorough review and consideration,” CNN said in a statement.

“We will be having conversations and seeking additional clarity about their significance as they relate to CNN over the next several days,” the news outlet added.

Speaking on his show earlier this year, Chris Cuomo claimed that he “never made calls to the press about my brother’s situation.” 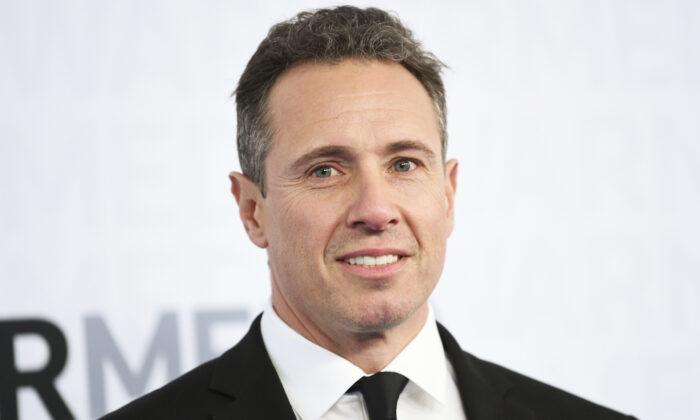 But the newly released material showed Chris Cuomo tapped sources, including some inside rival outlets, to try to ascertain if more women were coming forward to accuse his brother of sexual misconduct.

In one case, Chris Cuomo was tasked by Melissa DeRosa, at the time a top aide to Andrew Cuomo, with gathering “intel” about a looming story by New Yorker reporter Ronan Farrow.

Chris Cuomo was successful, telling DeRosa in a text message on March 15 that Farrow’s story “not ready for tomorrow.”

In another message, Chris Cuomo appeared to signal that he spoke directly with Farrow.

He also checked into rumored stories by other outlets, including Politico.

Other texts showed the CNN host drafted entire statements he hoped the New York gubernatorial office would release and attribute to Andrew Cuomo, who was governor at the time.

Chris Cuomo has not responded to requests for comment.

He told investigators during a deposition that he did not try to affect any reports.

“If I had tried to influence any of the reporting at CNN or anywhere else, I guarantee you, you people would know, and so would a lot of others,” he said.

“So the idea of one reporter calling another to find out about what’s coming down the pipe is completely business-as-usual.”

Experts have told The Epoch Times that Chris Cuomo’s behavior violates journalism standards and questioned CNN’s lack of transparency regarding the situation.

It is unethical for a journalist to use their position, contacts, and influence to help a family member or friend involved in an investigation by law enforcement,” Rebecca Aguilar, president of the Society of Professional Journalists (SPJ), said in an email.

“The SPJ Code of Ethics clarifies the rules: Avoid conflicts of interest, real or perceived, minimize harm and be accountable and transparent,” she added.

This article appeared at ZeroHedge.com at:  https://www.zerohedge.com/political/cnn-reviewing-documents-showing-chris-cuomo-was-untruthful-viewers