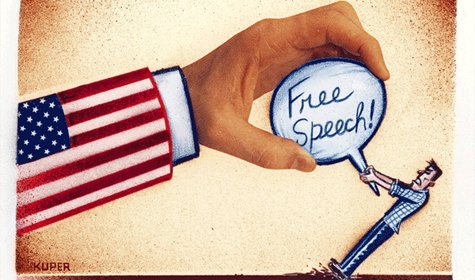 Judge Andrew Napolitano – “Chilling” is the word lawyers use to describe governmental behavior that does not directly interfere with constitutionally protected freedoms, but rather tends to deter folks from exercising them. Classic examples of “chilling” occurred in the 1970s, when FBI agents and U.S. Army soldiers, in business suits with badges displayed or in full uniform, showed up at anti-war rallies and proceeded to photograph and tape record protesters. When an umbrella group of protesters sued the government, the Supreme Court dismissed the case, ruling that the protesters lacked standing — meaning, because they could not show that they were actually harmed, they could not invoke the federal courts for redress.

Yet, they were harmed, and the government knew it. Years after he died, longtime FBI boss J. Edgar Hoover was quoted boasting of the success of this program. The harm existed in the pause or second thoughts that protesters gave to their contemplated behavior because they knew the feds would be in their faces — figuratively and literally. The government’s goal, and its limited success, was to deter dissent without actually interfering with it. Even the government recognized that physical interference with and legal prosecutions of pure speech are prohibited by the First Amendment. Eventually, when this was exposed as part of a huge government plot to stifle dissent, known as COINTELPRO, the government stopped doing it.

So, what has the Obama administration done to stifle, or chill, the words of its detractors? For starters, it has subpoenaed the emails and home telephone records of journalists who have either challenged it or exposed its dark secrets. Among those journalists are James Risen of The New York Times and my colleague and friend James Rosen of Fox News. This is more personal than the NSA spying on everyone, because a subpoena is an announcement that a specific person’s words or effects have been targeted by the government, and that person continues to remain in the government’s crosshairs until it decides to let go.

This necessitates hiring legal counsel and paying legal fees. Yet, the targeting of Risen and Rosen was not because the feds alleged that they broke the law — there were no such allegations. Rather, the feds wanted to see their sources and their means of acquiring information. What journalist could perform his work with the feds watching? The reason we have a First Amendment is to assure that no journalist would need to endure that.

Two weeks ago, a notorious pot stirrer in Norfolk, Neb., built a mock outhouse, put it on a truck and drove the truck with permission in a local Fourth of July parade.

Some thought this was crude, and some thought it was funny; yet it is fully protected speech. It is protected because satire and opinion about public figures are absolutely protected, as well as is all criticism of the government. Yet, the Department of Justice has sent a team to investigate this event because a local official called it racist. Such an allegation by a public official and such a federal investigation are chilling. The reason we have a First Amendment is to ensure that the government stays out of investigating speech.

And just last week, Attorney General Eric Holder, while in London, opined that much of the criticism of Obama is based on race — meaning that if Obama were fully white, his critics would be silent. This is highly inflammatory, grossly misleading, patently without evidential support and, yet again, chilling. Tagging someone as a racist is the political equivalent of applying paint that won’t come off. Were the Democrats who criticized Attorney General Alberto Gonzales or Secretary of State Condoleezza Rice racists? Is it appropriate for government officials to frighten people into silence by giving them pause before they speak, during which they basically ask themselves whether the criticism they are about to hurl is worth the pain the government will soon inflict in retaliation?

Surely, government officials can use words to defend themselves; in fact, one would hope they would. Yet, when the people fear exercising their expressive liberties because of how the governmental targets they criticize might use the power of the government to stifle them, we are no longer free.

Expressing ideas, no matter how bold or brazen, is the personal exercise of a natural right that the government in a free society is powerless to touch, directly or indirectly. Yet, when the government succeeds in diminishing public discourse so that it only contains words and ideas of which the government approves, it will have succeeded in establishing tyranny. This tyranny — if it comes — will not come about overnight. It will begin in baby steps and triumph before we know it.

Yet we do know that it already has begun.