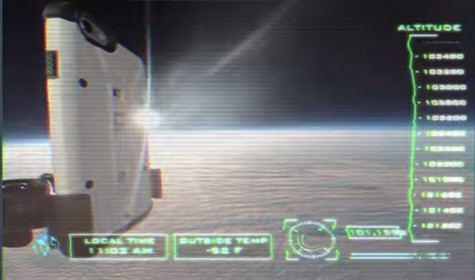 How strong do you think the case to your phone is?  Do you think it can withstand a drop from space?  Urban Armor Gear recently dropped an iPhone from space, and it filmed the whole event in an effort to show the strength of their new phone case.

In a quick 2 minute video, you’ll see the iPhone 6 fall from space in a UAS Composite Case after it takes off from a weather balloon on the ground. The video shows it passing through various elevations, it hits -16 degrees Fahrenheit. up around 43,000 feet, and eventually gets up to about 101,000 feet where the outside temperature is -54 degrees Fahrenheit. That’s when it’s dropped and begins its descent back to earth where it lands on the ground. As CNET notes, there is a parachute involved, and you can see the landing is rather soft, but it did survive after it was powered on again. According to CNET, the phone hit temperatures as low as -79 degrees Fahrenheit where the cold drained its battery; it also survived spins up to 150 rpm and 70 mph winds.

Now that’s some kind of case!