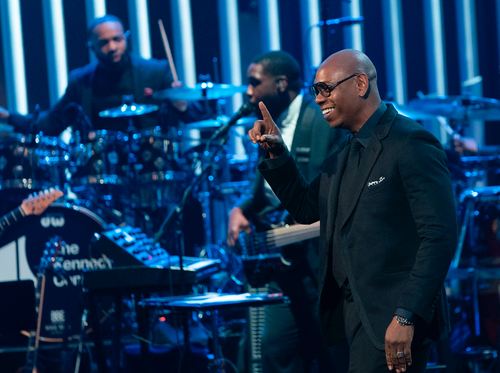 First, there were the numbers. Over the course of the last week, news commentators predicted a huge demonstration of Netflix employees in protest of comedian Dave Chappelle’s The Closer special, with Yahoo! typifying coverage. “Reports say that one thousand Netflix employees — nearly 10% of the company’s workforce,” they wrote, “are planning an October 20 walkout to protest the Chappelle special.”

The Hollywood Reporter did say “at least one thousand” were planning on participating in a “virtual walkout,” whatever that is, but noted the story first came out in The Verge, which talked about a “company-wide” demonstration. Others followed, mostly without any hint that any of the reporters involved talked to anyone at Netflix but the demonstration’s organizers.

Nobody checked, because everyone liked the narrative as was. As a result, “at least one thousand” became gospel, via headlines like Gizmodo’s “1,000 Netflix Employees Are Reportedly Planning Walkout to Protest New Chappelle Special,” or The Independent inviting us to “watch live” as “more than one thousand Netflix employees are set to walk out of their jobs on Wednesday.”

By this Wednesday, October 20th, the day of the planned walkout, the story became “hundreds of Netflix employees and supporters are expected” to show up (CNN). Then, as the event started, it became “hundreds of protesters stood in solidarity with” Netflix’s employees, per The Daily Beast, for instance. Then NBC told us “Hundreds rally outside Netflix,” where protesting employees who lined up outside were “met with roaring applause.”

How many employees walked out? Not one news organization put the real number in a headline, and only a few had the guts to even tweet that the actual protest was reduced in the end to the famed Arrested Development meme: 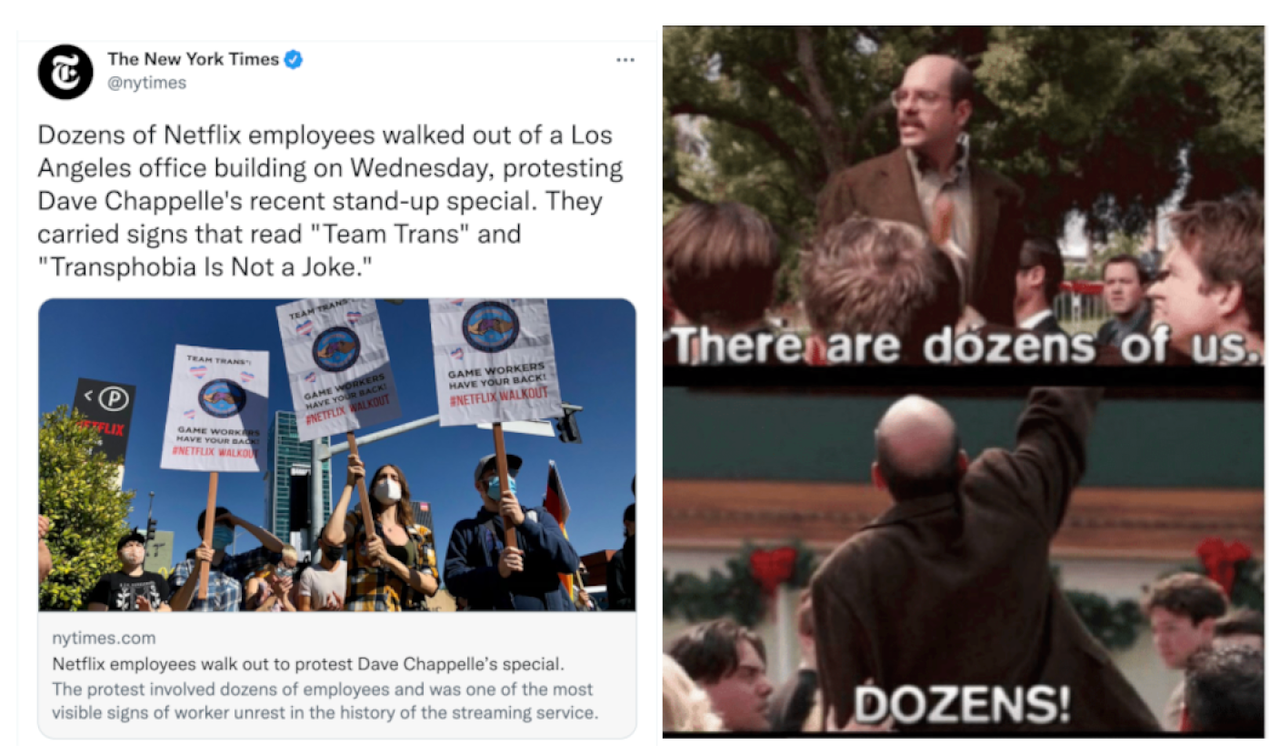 Even the op-ed wrapups couldn’t avoid sounding like parodies, with the Washington Post talking about the “crowd of dozens” gathered outside the company’s West Hollywood offices being evidence that the popularity of a comedian whose show already gained over 10 million views was colliding with a “growing movement to protect the rights of transgender people” (how a comedy set could be a violation of “the rights of transgender people” was not explained, of course).

Coverage across the board was ridiculously one-sided, with story after story quoting nothing but activists and woke Twitter personalities denouncing Chappelle’s “alleged jokes.” Journalists not only felt no responsibility to accurately gauge how many protesters might turn up, or balance out the outraged tweets with any of the millions of commenters who felt differently (or indifferently, as it were), they routinely mischaracterized the show’s content. For instance, Chappelle was regularly accused of having “defended” the rapper DaBaby in the special, an example being New York Times guest columnist Roxane Gay writing:

One of the strangest but most telling moments in ‘The Closer’ is when Mr. Chappelle defends DaBaby, a rapper in the news for making pretty egregious homophobic remarks.

You have to be high, or having a psychotic episode, to hear “defending DaBaby” in The Closer. For those who don’t know the story — I didn’t — DaBaby, described by Chappelle as “the number one streaming artist until about a couple of weeks ago,” went onstage in a concert in Florida in July and went on a half-coherent rant. He told “fellas” in the crowd: “If you ain’t sucking dick in the parking lot, put your cell phones up!” Some in the crowd went along.

“Now you know, I go hard in the paint, but even I saw that shit and was like, ‘God damn, DaBaby,’ was Chappelle’s first comment. Then he went on:

Can’t do that. Can’t do that. But I do believe and I’ll make this point later that the kid made a very egregious mistake. I will acknowledge that. But, you know a lot of the LBGTQ community doesn’t know DaBaby’s history, he’s a wild guy. He once shot a n*gga… and killed him, in Walmart. Oh, this is true, Google it. DaBaby shot and killed a n*gga in Walmart in North Carolina. Nothing bad happened to his career.

Do you see where I am going with this? In our country, you can shoot and kill a n*gga, but you better not hurt a gay person’s feelings.

You can definitely infer from that bit that Dave Chappelle does, in fact, think it’s worse to shoot and kill a person than to make homophobic remarks. That regularly came out translated in op-ed pages as “defending DaBaby.” Such blithely insane, proudly dishonest mischaracterizations have become a regular feature of national media commentary, and Chappelle mocks the habit repeatedly in The Closer (to the delight of audiences around the world, it might behoove press people to notice). However, that’s not where he was going with the DaBaby bit.

White audiences couldn’t get enough of laughing at institutional racism as described in Chappelle’s Show, but The Closer is something different. Here we’re not talking about meathead cops who shoot your dog, or fat-cat white collar lawyers, congressmen, and federal investigators who kiss the asses of corporate thieves, i.e. the type of character he roasted in bits like “Tron Carter’s Law and Order.” Everyone hates those people, so you can beat on them all you want. They long ago stopped being taboo targets. The Closer goes after racism we’re not yet allowed to discuss.

Fifteen-plus years ago, when Chappelle’s Show was taking the entertainment world by storm, we didn’t yet live in a world where upper-class white people had completed their Apollo 11 mission to enlightenment and planted a flag in racism and discrimination as their exclusive properties.

This article was Authored by Matt Taibbi via TK News, and appeared at ZeroHedge.com at:  https://www.zerohedge.com/political/taibbi-cancel-culture-takes-big-l