Calculating The Californication Of America

Beset by high housing costs, crippling taxes, astronomical gas prices, wildfires, and rolling blackouts, Californians are heading for the exits. That’s sparking anxiety in places where these Golden State migrants are relocating. A mayoral candidate in Boise, Idaho, recently suggested building a wall to keep out Californians, who account for 60 percent of domestic migration into the growing state. The election of increasingly progressive candidates in Colorado sparked talk there of the “Californication” of the Centennial State.

Much of this anxiety revolves around fears that the migrants will transform the politics and culture of the places that they’re moving to—bringing an appetite for big, intrusive government. 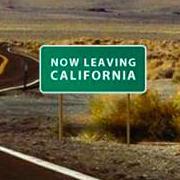 But a new survey suggests that, while plenty of people are looking to leave California, many are fleeing the state’s high costs and politics and may not be interested in voting for the same things in their new homes.

The poll, by the Berkeley Institute of Governmental Studies, found that 52 percent of California residents are considering migrating. As these polls go, that’s exceptionally high, putting California in the same category as some other states with very unhappy residents. A recent poll in New Jersey, for instance, found that about 44 percent of its people are looking to depart, while 50 percent of Connecticut residents indicated a desire to leave the state in a 2014 Gallup poll, the highest figure among any state at that time.

Politicians in high-tax states claim that taxes don’t drive people out, but their constituents disagree: in the Berkeley poll, 58 percent of those considering leaving California said that high taxes were one reason—second only to the 71 percent pointing to the state’s astronomical housing costs. Also high on the list of reasons to go was the state’s political culture, which nearly half of those thinking of getting out cited as a consideration. Though the poll didn’t define “political culture,” Gallup ranks California—where the state legislature and elected officials in many of the state’s cities have turned increasingly progressive—as among the most liberal of states.

What set the Berkeley poll apart is that it also asked residents their party affiliation and how they characterized themselves politically—revealing a sharp divide. Conservatives and moderates are the most unhappy with the state and most anxious to leave. Liberals, by contrast, are mostly staying put, and some think life in California is just great. Only 38 percent of Democrats said that they were considering leaving, compared with 55 percent of independents and 71 percent of Republicans. Similarly, those characterizing themselves as “somewhat liberal” were least likely to say that they want to go—fewer than four in ten are considering leaving. But 53 percent of moderates, 66 percent of the “somewhat conservative,” and 74 percent of the “very conservative” would like to migrate. Political affiliation, in fact, was more of a predictor of who wants to go or stay than other demographic information, such as race. The poll found, for instance, that 56 percent of white residents and 58 percent of African-Americans would like to leave; and 54 percent of men, compared with 50 percent of women, are thinking of going.

The results also suggest, however, that a political revolution that reverses the direction of California government is becoming increasingly difficult because it’s experiencing the state version of the Curley Effect. That phrase, coined by economists Edward Glaeser and Andrei Shleifer, describes how big-city mayors like James Michael Curley in Boston in the early twentieth century and Coleman Young in Detroit in the mid-to-late twentieth century managed to solidify their political dominance, even as their cities deteriorated because their policies drove out the people most likely to vote against them. That may explain why, despite California facing rising homelessness, increasing drug use, outbreaks of infectious diseases, blackouts, soaring housing costs, and high energy prices, voters and elected officials endorse still-higher taxes and fees, lighter penalties for crimes like drug use and shoplifting, and a government takeover of bankrupt power company Pacific Gas & Electric.

In a much-quoted interview last summer, California governor Gavin Newsom called his state a positive example of where America was heading – proof, he said, that multiculturalism and progressive social values can produce prosperity. “California is America’s coming attraction,” he said. About half of California begs to differ.

This article appeared at ZeroHedge.com at:  https://www.zerohedge.com/political/calculating-californication-america