Buccaneers Offensive Production Too Much for Ranger, 12-4 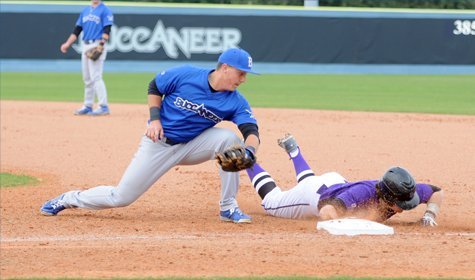 The Buccaneers used the middle innings to pull away from Ranger, scoring four in both the third and fifth inning to come away with the victory and keep a zero in the loss column at 3-0 on the young season.

“To win three in a row and sweep someone on the weekend is hard to do,” said Blinn head coach Harvey McIntyre. “I like the fact that we outscored them 12-2 after the first inning.”

Cullen Jozwiak led the way with three singles along with two RBIs. Robbie Rojas knocked in the most runs on the day with four as he nailed a two-run double and two-run home run to add to the offensive firepower. Jager Toffan came on late as a pinch hitter but quickly sent a ball over the fence in right to drive in three runs to cap the scoring for Blinn.

Ranger picked up two runs in the first inning off of a home run but Blinn fought back in the third inning. Stephen Stuart drove in the first run with a single through the right side of the infield. Rojas gave the Buccaneers a 3-2 lead with his two-run double and then later came around to score for a 4-2 lead.

Ranger tied the game in the top of the fourth but the game didn’t stay tied for long. Jozwiak got the lead back with a single to create the 5-4 score in the bottom of the fourth. The lead expanded quickly in the fifth when Rojas blasted a two-run home run for a 7-4 lead.

“The pitcher came in with a fast ball on the pitch before the home run and I fouled it off but he came back with it again and I just turned on it,” Rojas said after the game. “We have been working our butts off since the beginning and we knew this weekend was going to be tough.”

Ranger had a hard time getting outs as Patrick King drew a bases-loaded walk and then Jozwiak followed with his second consecutive RBI single for a 9-2 lead.

With the spacious lead, Blinn was able to get in a few pinch hitters and Toffan quickly added to the lead in the eighth with a three-run no-doubt home run to right for a commanding 12-4 lead that ended up being the final score.

Blinn will hit the road next weekend for the San Jacinto Tournament that starts on Friday with a game against Baton Rouge Community College at 3 p.m. in Houston.