Austin County Will Get Two New Ambulances But, They Won’t Be Cheap [VIDEO] 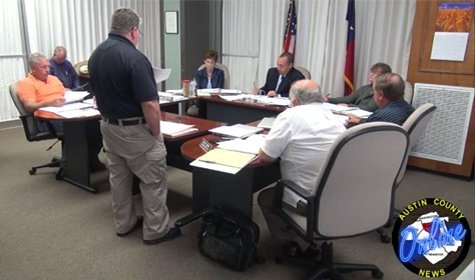 Item fourteen on Commissioner’s Court’s agenda was “Consideration and possible action to approve purchase of 2 ambulance chassis and remounts.”  Ron Dille Austin County’s EMS Director reported to the court on what he was able to find out concerning ambulance chassis.  He was forced to choose diesel because neither Ford nor Chevrolet supported ambulance prep packages in their gasoline line.  The primary decision between Ford and Chevrolet when considering diesel vehicles was their weight handling capacity where Ford had the better weight handling capacity by 1000 pounds.    Bids were obtained from a number of dealerships around the area and Columbus Ford was the cheapest by about $4000 per vehicle.

Dille continued to explain that obtaining the chassis was only part of the need.  Remounting, which amounts to basically refurbishing the box that is mounted on the chassis (where the patients ride) was the other and that was going to cost about $65,000 for one of the ambulances.  Though that figure may sound high, Dille said that the price he was quoted for a brand new box that matched the specs that Austin County needed was around $175,000. The upside of going the remount direction was that the county will basically have a brand new ambulance for around $100,000.

The price to remount the other ambulance box will cost $39,000, primarily because it is newer.  In total, the amount requested to take care of both vehicles and boxes was $182,738.10.  Dille also informed that court that the company that handles the work or remounting is running behind and it won’t be until April or May until they can begin working on the two ambulances.

Commissioner Turner expressed concern about paying the entire amount to the vendor in advance because he felt that that takes all the pressure off of the vendor to deliver.  Dille stated that he had been dealing with this particular company since about 86 or 87 and found them to be very reputable.  Randy Reichardt also pointed out that there was no other company in the area that could perform the work.  Turner pushed on and asked that they hold back $10,000 in reserve.  The court generally agreed that this was not an unreasonable request and voted unanimously to hold back $10,000 until delivery of the ambulances.

One final point that Dille wanted to clarify to the court was that the trucks would go in one at a time to be remounted and not both at the same time which means that the second truck will be available at a later date.