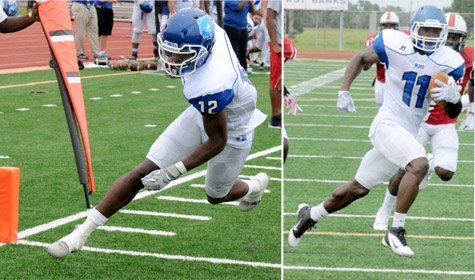 “Scoring a bunch of points is what we would like to do but we also left a lot of points on the field as well,” said Ryan Mahon, Blinn interim football coach.

Kentory Matthews and D’Anthony Hopkins each scored two touchdowns on the ground to help Blinn start the season 1-0.

Tre’veon Hamilton led the Buccaneers in receptions with five for 55 yards and a touchdown in the win.

“I was able to get open in the flat and got past my defender to get into the end zone for the touchdown,” Hamilton said. “We need to continue to bring this energy in every game for the rest of the season.

Blinn played three quarterbacks in the blowout victory as Caleb Hill got the start and went 11-for-19 for 127 yards. Weston Elliott passed for 115 yards and a score while Aaron Sharp passed for 46 yards and a touchdown.

Hopkins got off to a great start as he capped the first two Blinn drives with rushing touchdowns of four and one yard to give the Buccaneers a 14-0 yard. Sharp capped the scoring in the first quarter by finding Hamilton for a 12-yard touchdown for a 21-0 lead.

Blinn’s offense continued to roll on its fourth consecutive possession with a score as Matthews scored from 14 yards out for a 28-0 lead with 13:40 left in the half. The Buccaneer offense finally had a possession without a touchdown but special teams was able to make up for it with a 40-yard punt return for a touchdown by Kendall Sheffield for a 35-0 lead that would hold up until halftime.

With the game well in control, Kavan Johnson added the finishing touches with a nine-yard touchdown run to give Blinn a commanding 55-0 lead that end up as the final score.

Blinn will have its home and conference opener on Sept. 3 against Cisco College at Cub Stadium at 7 p.m. The national champion cheer and dance teams will receive their championship rings during this game and it will be the Alumni & Friends/Lettermen Association game.