“It’s wonderful to see Destianna and Jillian moving onto four-year schools,” Blinn head coach Michael McBride said. “Destianna really started to display some fine leadership qualities over the past two semesters at Blinn and Edward Waters will certainly benefit from this. Jillian was an instrumental part of the program in its inaugural year, but we believe her best college soccer is yet to come.”

Manning came to Blinn from Seven Lakes High School and played in four games for the Buccaneers in 2019.

“I’m beyond blessed and excited to be given the platform of the Blinn College women’s soccer program to progress to the next level,” Manning said. “The next stage in my life is finding the exact profession in criminal justice and to build a family with my new team. The soccer program at Blinn helped me learn some fundamental key skills that I needed extra coaching on and the constant communication from my coaches always keeping me on track whether it was my grades or extra training.” 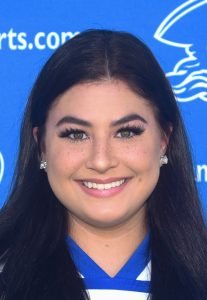 Jackson came to Blinn from Vista Ridge High School and made an immediate impact. She played in 18 games, started in 11, and recorded one assist in two years at Blinn.

“I am very excited to be moving on a four-year school since I have been wanting to for a while and I am mostly excited for meeting new friends, a new team, and being in a new environment,” Jackson said. “Blinn helped me by giving me a stepping stone and the tools I needed to transfer. I will miss my friends that I’ve made and the coaches that have helped me achieve my goals and pushed me to where I am today.”

Blinn finished the season with a 6-9-1 overall record and 4-7-1 conference record. The team also was honored with a 2019 College Team Ethics and Sportsmanship Award from the United Soccer Coaches Association for exhibiting fair play, sporting behavior, and adherence to the laws of the game.

“Destianna and Jillian both have had unorthodox journeys,” Blinn assistant coach Alexandria Jackson said. “I am extremely proud to see both of them reach their goals in continuing their academics and soccer careers at four-year schools.”

Wade Strother And The Renegades Live At The Saddleback Saloon