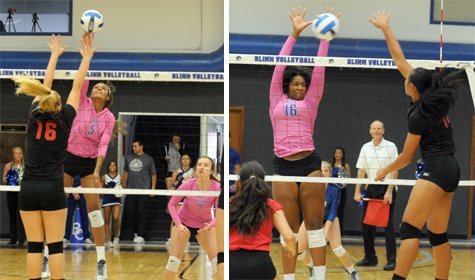 BRENHAM, Texas – Blinn College volleyball continued to take strides as a team as it capped a perfect 2015 Applebee’s Classic with sweeps over New Mexico Military Institute and Temple College Saturday at the PE Building in Brenham.

“I felt like we played better the second day of this tournament than we did the first day,” said head coach Kalie Mader.

New Mexico Military Institute was able to keep nearly all the sets close but Blinn was able to step on the gas when it needed it to come away with a 3-0 sweep. In the first set everything was tied 15-15 until Jordyn Keamo came up to serve her way to 10 consecutive points.

With help from her teammates, Keamo was able serve aggressively and an ace helped Blinn grab the first set 25-15.

The second set was much closer down the stretch as New Mexico Military was one point away from taking the set at 24-22. Blinn was able to regroup after a timeout and win three points in a row after a block from Eboni Mitchell gave Blinn a slight 25-24 lead. Alexis Kingston was able to close out the second set with a kill for a 27-25 second set victory and a 2-0 lead in total sets.

“I feel like we regrouped when we called that timeout and told ourselves that it is going to be OK,” said Abolanle Onipede after the match. “We just needed to play Blinn volleyball and play how we know we can.”

The third set was strikingly similar to the first set as Blinn and New Mexico Military were locked up at 17-17 until Keamo started firing serves. Blinn went on to win eight of the following nine points as Haley Howard closed out the match with a kill for the 25-18 victory.

Onipede and Kingston led the way with nine kills as the team hit for a glossy .433 percentage. Mitchell came up with eight kills. Keamo dished out 35 assists and nailed seven of the team’s nine aces in the win.

Blinn was able to showcase the balance on offense against Temple that coach Mader enjoys and only the third set was relatively close. This was the first match for the Buccaneers that they had more aces (13) than errors serving.

Danusia Borgeaud led the way with eight aces and four kills. Mitchell had the most kills with five and Kingston tallied four kills. Keamo and Justus Tuiolosega split time at setter as Keamo had 12 assists and Tuiolosega finished with nine. Dana Teets led with eight digs.

The first two sets came pretty easy even though Temple is a scrappy team as Blinn grabbed a two set lead with 25-15 and 25-14 victories. Temple put in a little bit more fight in the third set but Blinn was able to seal the sweep in the third to cap a memorable tournament.

The Buccaneers will hit the road next weekend for the San Jacinto 2015 Military Appreciation Classic at San Jacinto College. Blinn will open the tournament Sept. 4 against Southwestern Christian College at 11 a.m. and then finish the day against Miami Dade College at 7 p.m. Blinn and Miami Dade met in the 2014 National Championship match.

Blinn has competed in intercollegiate athletics since 1903 and captured 32 NJCAA national championships since 1987. For more information, visit: www.buccaneersports.com.