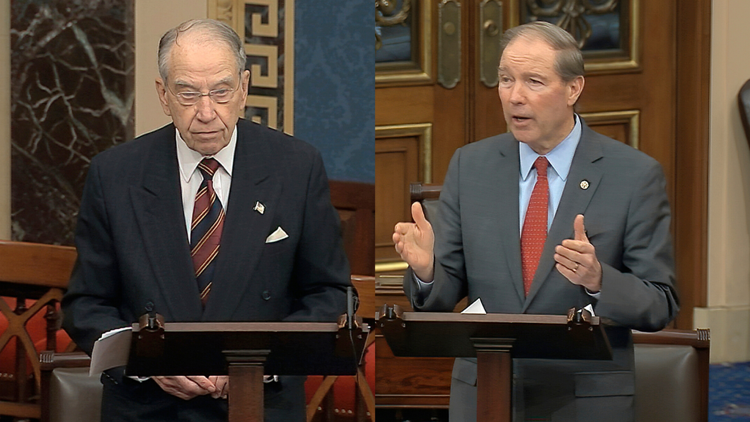 U.S. Sens. Tom Udall, D-N.M., and Chuck Grassley, R-Iowa, on Tuesday introduced legislation to raise the royalty rates for oil and gas development on federal lands, on the 100th anniversary that the Mineral Leasing Act was passed.

The senators say the Mineral Leasing Act, which was passed in 1920 and governs oil, gas and mineral leasing on federal lands, is “antiquated” and needs to be modernized.

The Fair Returns for Public Lands Act of 2020 would increase the federal royalty rate from 12.5 percent to 18.75 percent, which a press release from Udall’s office says “reflects the current fair market value.” That increase would boost federal income by $200 million, according to a Congressional Budget Office estimate.

Typically half of revenue generated from energy development on federal lands goes to the Treasury Department, while roughly half goes to the state in which the lease is located.

The minimum price to bid on oil and gas leases on public lands would also increase from $2 an acre to $10 an acre under the legislation. In the first five years of a lease rental, rates would be set at $3 an acre and then rise to $5 an acre for the next five years, the bill says.

“Oil and gas companies are paying significantly higher royalty rates offshore and on many state and private lands, and there is no need to give federal onshore producers a sweetheart deal at a time of record U.S. production along with rising climate change and habitat impacts,” Udall said. “After one hundred years of the Mineral Leasing Act, it is high time for real reform that gives state and federal taxpayers their fair share of royalties.”

Grassley said in a statement that the unchanged royalty rates are “just one example of Big Oil saying it wants a free market, but lobbying for taxpayer-funded corporate welfare. It’s time for my colleagues in Congress to end this oil company loophole, end the corporate welfare and bring oil leasing into the 21st century.”

An analysis released Tuesday by the Denver-based Center for Western Priorities “shows that taxpayers could have received more than $10 billion in royalties over the last five years if higher royalty rates had been in place.”

This article was reprinted with permission from thecentersquare.com.  The original author was Derek Draplin who can be contacted at ddraplin@watchdog.org.  Original article appears HERE.