Auto-Drive Has Arrived With The Tesla Autopilot [VIDEO] 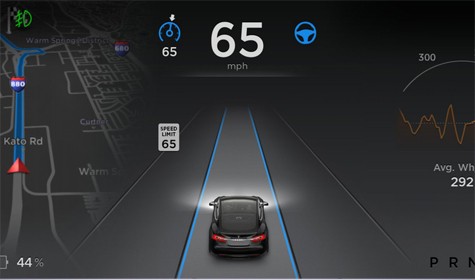 Many of us are familiar with the self parking cars released by the auto industry but, Tesla motors is the first one to roll out a totally hands free self-driving car.  The Tesla Autopilot is a software release that allows the Tesla Model S car (and eventually their SUV) to drive itself.  In Tesla’s Press Release concerning their Autopilot Software they stated:

In October of last year we started equipping [the] Model S with hardware to allow for the incremental introduction of self-driving technology: a forward radar, a forward-looking camera, 12 long-range ultrasonic sensors positioned to sense 16 feet around the car in every direction at all speeds, and a high-precision digitally-controlled electric assist braking system. Today’s Tesla Version 7.0 software release allows those tools to deliver a range of new active safety and convenience features, designed to work in conjunction with the automated driving capabilities already offered in [the] Model S. This combined suite of features represents the only fully integrated autopilot system involving four different feedback modules: camera, radar, ultrasonics, and GPS. These mutually reinforcing systems offer realtime data feedback from the Tesla fleet, ensuring that the system is continually learning and improving upon itself. Autopilot allows Model S to steer within a lane, change lanes with the simple tap of a turn signal, and manage speed by using active, traffic-aware cruise control. Digital control of motors, brakes, and steering helps avoid collisions from the front and sides, as well as preventing the car from wandering off the road. Your car can also scan for a parking space, alert you when one is available, and parallel park on command.

Quite a few YouTube Videos showing people trying the Autopilot software have emerged.  Jalopnik stated that Tesla’s Autopilot System is awesome and creepy but, promises a beautiful future.

A TechCrunch driver called the ride a “mind-blowing experience” — that is, once he relaxed.

“There were times when the system tripped up, but it did so gracefully. At no point during our test did it feel like the car was doing anything unsafe, nor did I ever feel like I couldn’t immediately retake control. A few times, though, things that I was expecting to happen just … didn’t. I’d tell the car to switch lanes; instead, it just stayed its course, keeping me perfectly in the lane I was already in.”

The roll out of the new software for the car isn’t perfect though and the Autopilot functions aren’t yet complete.  Green Car Reports.com did had an hour long phone interview with CEO Elon Musk and the very first thing he said in the press call was that this was a “release of Autopilot Version 1, and we still think of it as a public beta–so we want people to be quite careful.”

Drivers are strongly recommended to keep their hands on the wheel at all times and stay alert to the need to take back control of their car from the software.

We’ve included  2 videos of the test drives.  This first is from the Wall Street Journal which gives an excellent overview of the Autopilot features and the second is a much longer sixteen minute video from a DragTimes reporter demoing the feature.