CNSnews.com – Mark Spitznagel unleashed 18 baby goats on Detroit to clean up the nation’s largest bankrupt city – which forced him to abandon his urban renewal effort.

Most people love goat cheese and the critters whose milk it’s made from. Many have a fascination with the goat-defined as “a bovine ruminant famous for its ability to forage on plants unpalatable and in habitats inaccessible to other browsers.” Maybe, it’s those eyes with the horizontal pupils, or maybe it’s the fun of butting heads with one, but goats are just plain cool.

If the goat census-takers at the United Nations Food and Agriculture Organization are right, there are about a billion of them around the world. They are among nature’s friendliest weed wackers, lawn mowers, landscape artists and garbage disposals.

They may also be part of the solution to the urban blight that often leaves large tracts of city land overgrown with unsightly greenery.

Enter Mark Spitznagel-economist, author, goat-farmer, cheese-maker and billion-dollar hedge fund manager from Leelanau County, Michigan. Mark’s book, The Dao of Capital: Austrian Investing in a Distorted World has quite a few positive reviews on Amazon.com as well as other book sellers. So, you might not expect, that the same man who wrote such a brilliant work of economics, finance and investing would a few months later be dropping goats off to forage within inner-city Detroit. But that’s precisely what’s got him in the news in recent days, from the Detroit Free Press to the New York Times.

“Detroit’s decline from a city of nearly two million then to about 700,000 today can be laid at the doorstep of many bad policies. Hostility to local enterprise (and a desire to tax and regulate it to death) is surely high on the list.”

Mark wants to deploy goats to help clean up the nation’s largest bankrupt city. Just last month, a task force revealed how monumental the job is:  A whopping 40,000 dilapidated buildings need to be torn down now. Tens of thousands more may have to be demolished or at least restored to be made useable. The task force found that about 30% of the lots in the city-114,000 parcels, many packed with trash and redolent with weeds-are utterly vacant. More than 90 percent of publicly-held parcels are officially designated as “blighted.”

Last Thursday, Spitznagel trucked 18 baby goats from his farm four hours north and set them down in what the Detroit Free Press termed “a desolate block next to a burned-out abandoned house” right across the street from “an empty field” in the Brightmoor section of the Motor City. The experiment was dubbed Idyll Farms Detroit, after the name of his farm in northern Michigan. The goats were an instant hit with the neighbors, who welcomed the animals and their blight-eating appetites.

The reaction from the City of Detroit, however, was swift
and not-so-friendly. A bureaucracy known for its endless foot-dragging this time slammed its foot firmly down. The goats would have to be gone by noon Monday (yesterday). Apparently they are in violation of a city ordinance that makes it “unlawful to own, harbor, keep, maintain, sell or transfer farm or wild animals.” 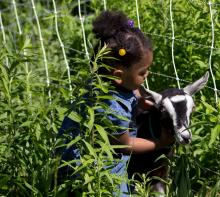 Spitznagel is no fool. He knows the presence of the goats is a challenge to the City. Sometimes you just have to do something to get something done. He sees this as an opportunity to get things moving in some new directions in a city long mired in the doldrums and disillusionment. This is private initiative in action, the sort of thing that he hopes will get city officials’ attention for a larger vision-brightening blighted urban properties with agricultural uses that would otherwise run afoul of conventional “planners” and zoning rules.

On Monday as the deadline loomed, Spitznagel complied with the city’s order and moved the goats off-site. The Battle of Goatville (that’s my name for it) is on hold as talks are underway with city officials. “Idyll Farms is hoping to work with the city in order to allow such urban farming projects to proceed in Brightmoor,” Spitznagel told me late yesterday. “These are good things,” he says, “for the community in terms of revitalization, employment, education, and entrepreneurial energy. I look forward to it happening.”

More than 50 years ago, Berry Gordy started Motown Records in a house on West Grand Boulevard in downtown Detroit. Some years later, a city ordinance banned home-based businesses. Good thing for Gordy and for Detroit that such an ordinance was not on the books in 1960. Detroit’s decline from a city of nearly two million then to about 700,000 today can be laid at the doorstep of many bad policies. Hostility to local enterprise (and a desire to tax and regulate it to death) is surely high on the list, as Michigan’s free market think tank, the Mackinac Center for Public Policy, has demonstrated on numerous occasions.

The way I look at it, quite apart from my personal affection for goats, Detroit can go in one of two directions on this. It can stand firm by the book and allow no flexibility in its obsolete rules. That would be business as usual. Or it can allow the lowly goat, one of the earliest animals to be domesticated by humans, to teach us the value of flexibility, innovation and entrepreneurship. Perhaps it’s the goat’s turn to domesticate us.