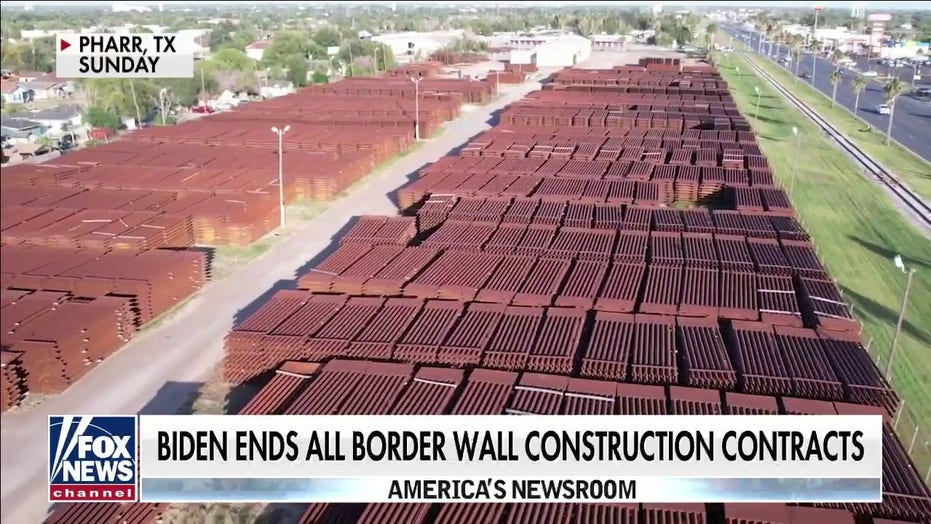 More than a $100 million worth of taxpayer-paid border wall materials have been discarded and are going to waste in Texas after President Biden ended construction of the barrier when he entered the White House in January and canceled contracts for its construction, according to a report.

A Fox News drone captured footage of around 10,000 steel panels — enough to build 100 miles of wall — rusting in the sun in Pharr, Texas, since January.

Only about 14 miles of the wall was built before former President Donald Trump left office.

“Keep in mind, taxpayers have already paid for this,” ​reporter Bill ​Melugin said on “America’s Newsroom.”

“It’s bought and paid for and nothing is happening with it​,” he added.

The news crew also took video of where the wall abruptly ends in La Joya, Texas, ​leaving an open space that illegal immigrants can easily walk across.

“Basically, it’s useless,” ​Melugin said. “We watch these migrants just walk around it all the time. It’s not doing anything, and the border agents out here are having to run around left and right as runners are constantly coming through.”

Live with @BillHemmer & @DanaPerino this morning discussing the Biden admin’s decision to cancel the border wall contract. A federal source tells me steel for over 100 miles was purchased for wall in RGV & Laredo, but only about 14 miles were completed before Biden stopped it. pic.twitter.com/pseT3kUo6A