Will Robot Tractors Save America’s Farming Industry After It Crashes? 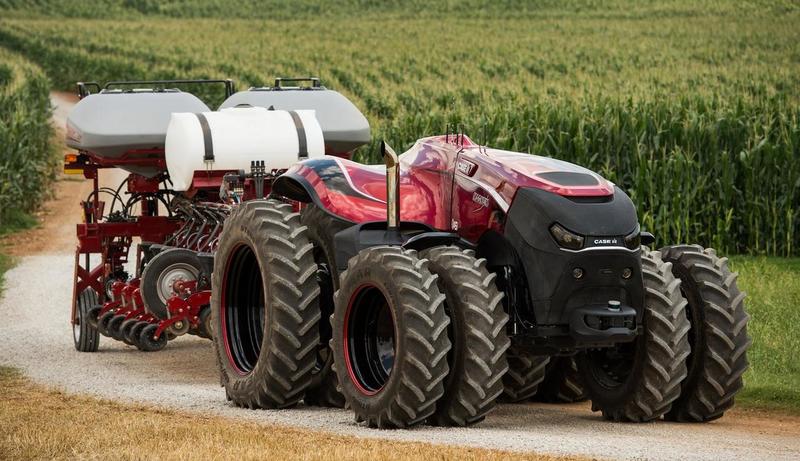 Agriculture automation has the potential to reshape the farming industry in the 2020s and beyond.

A new analysis from Bloomberg shows robot farm equipment is becoming commercially available, which means tractors will have no cabs – able to spray, plant, plow, and weed cropland with artificial intelligence.

Autonomous farming is a popular theme among all farming equipment manufacturers. Several years ago, the Australian government studied robot tractors from John Deere, Case New Holland, CNH Industrial, AGCO, CLAAS, Same Deutz-Fahr, and Kubota. The key takeaway from the matrix below is that Deere and CNH are leading when it comes to making tractors fully autonomous, with both companies having released working prototypes. 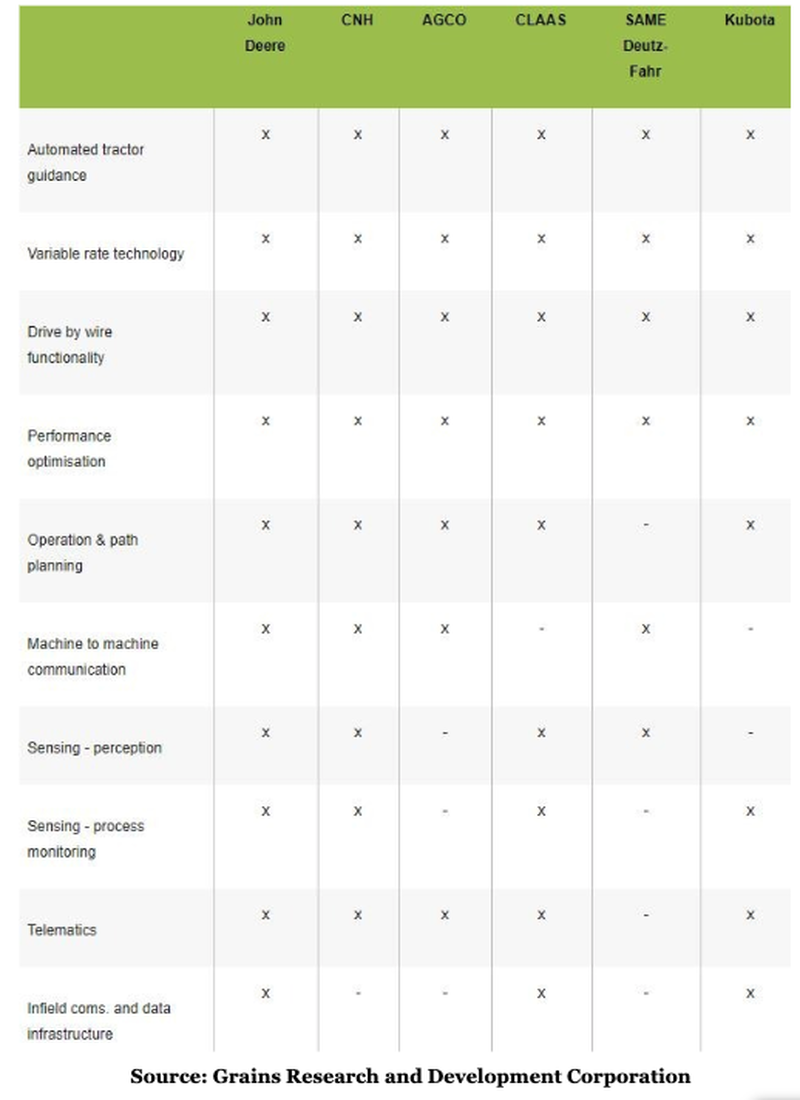 Bloomberg notes that several startups in Canada and Australia have already made their autonomous farm equipment commercially available.

In Saskatchewan, a Canadian province that borders the US, Dot Technology Corp. sold fully autonomous power platforms for the spring planting season. 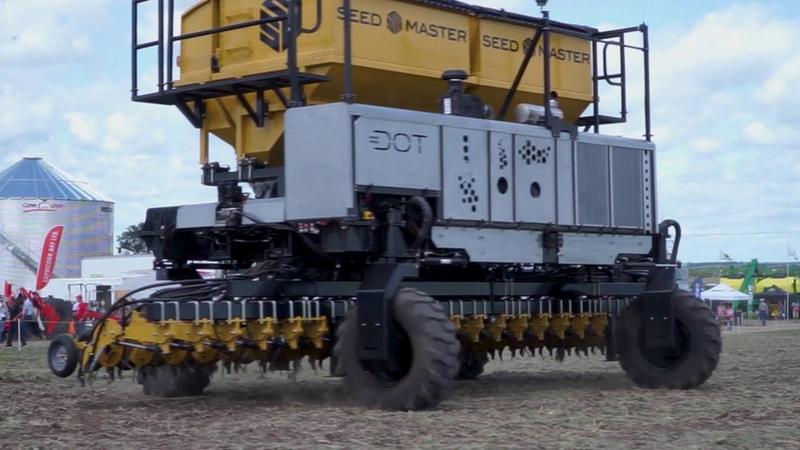 In Australia, SwarmFarm Robotic is selling weed-killing robots that can also mow and spread. These companies say their new machines are much smaller and efficient than traditional field equipment. 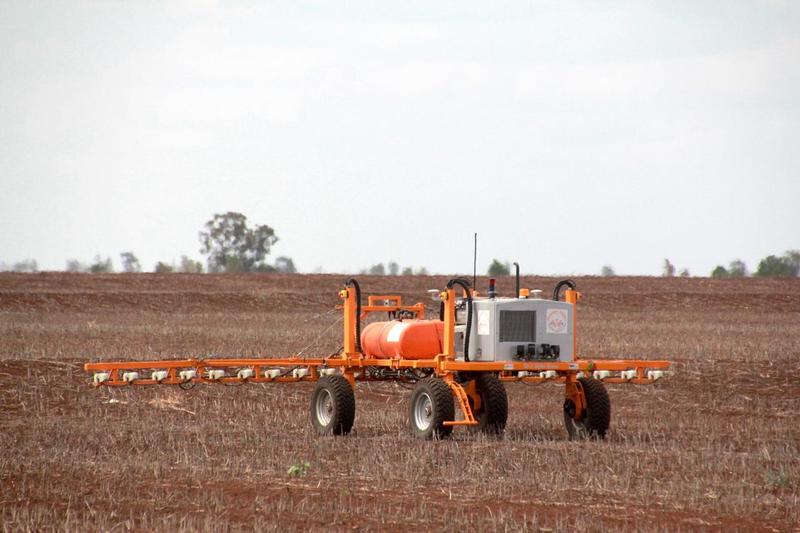 Sam Bradford, a farm manager at Arcturus Downs in Australia’s Queensland state, was one of the first adopters of SwarmFarm’s robots last year. He has four truck-sized weed-killing robots to manage thousands of acres.

Before, Bradford had used a Case Patriot 4430 Sprayer with a 120-foot boom that “looks like a massive praying mantis.” It would cover the field in chemicals, he said. 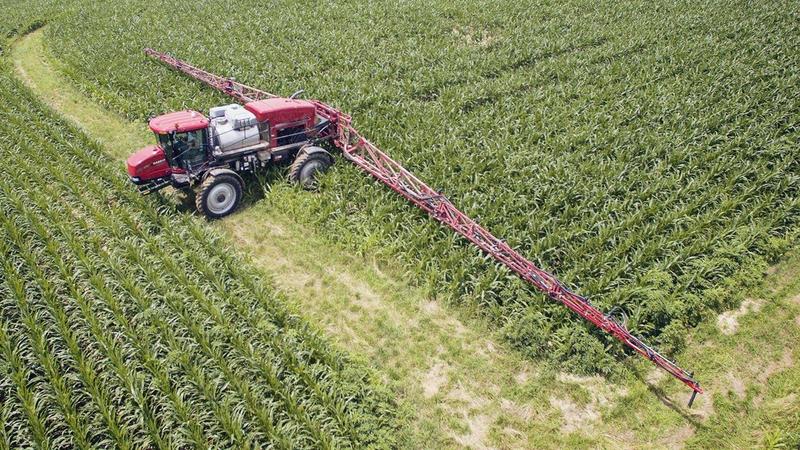 However, robots are more precise than traditional sprayers. Bradford said his robots work 20,000 acres, will save him 80% of his chemical costs.

“The savings on chemicals is huge, but there’s also savings for the environment from using less chemicals and you’re also getting a better result in the end,” said Bradford, who’s run the farm for about 10 years. Surrounding rivers run out to the Great Barrier Reef off Australia’s eastern cost, making the farm particularly sensitive over its use of chemicals, he said.

Costs savings have become important as a deepening trade war has sparked a potential agriculture recession in the US. On top of that, spot prices for agriculture products have been in decline for five years.

The S&P GSCI Grains Index Spot has collapsed more than 50% in 81 months from the August 2012 peak. Meanwhile, inflationary cost pressures have been seen in farming equipment, labor, seeds, fertilizers, fuel, and other farming inputs has led to low margins.

Personal incomes plummeted the most in three years last quarter, as the entire industry is on the verge of collapse from the ongoing trade war.

Trade wars, depressed commodity prices, natural disasters, and a synchronized global slowdown have brought many farmers onto the edge of bankruptcies. 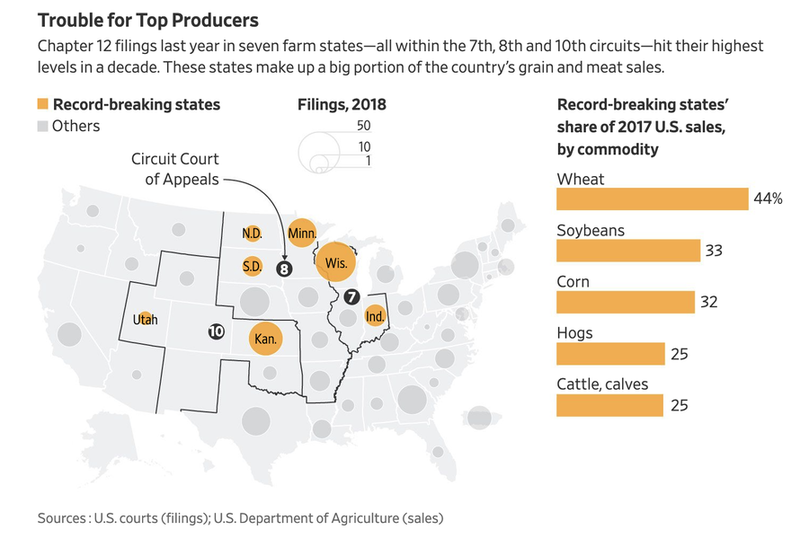 Several months ago, we reported that federal data showed the number of farmers filing for bankruptcy has climbed to its highest level in a decade.

Before the start of Saskatchewan’s growing season, Dot sold autonomous tractors to farmers throughout the region.

Brett McClelland, product manager of autonomous vehicles at CNH Industrial, said the modern tractor does thousands of tasks, and to fully automate those tasks, a deep understanding of each is needed to automate them.

One of the most challenging areas is “sensing and perception,” said McClelland.

CNH Industrial revealed an autonomous tractor at the 2016 Farm Progress Show in Boone, Iowa. The tractor is still undergoing test pilots and not yet commercially available.

This article appeared at ZeroHedge.com at:  https://www.zerohedge.com/news/2019-05-17/will-robot-tractors-save-americas-farming-industry-after-it-crashes