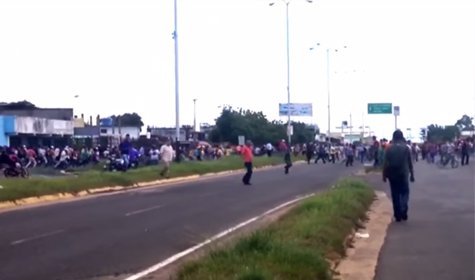 Over the years, we have repeatedly poked fun at the transformation of Venezuela into a “socialist utopia” – an economy in a state of terminal collapse, where the destruction of the currency (one black market Bolivar is now worth 107 times less than the official currency’s exchange rate) and the resulting hyperinflation is only matched be barren wasteland that local stores have transformed into now that conventional supply chains are irreparably broken.

Just this past Wednesday we showed a clip of what is currently taking place inside Venezuela supermarkets, noting that “the hyperinflationary collapse in Venezuela is reaching its terminal phase. With inflation soaring at least 65%, murder rates the 2nd highest in the world, and chronic food (and toilet paper shortages), the following disturbing clip shows what is rapidly becoming major social unrest in the Maduro’s socialist paradise… and perhaps more importantly, Venezuela shows us what the end game for every fiat money system looks like (and perhaps Janet and her colleagues should remember that).”

Unfortunately, while mocking socialist paradises everywhere is a recurring theme especially once they have completely run out of other people’s money to burn through, what always follows next is far less amusing – complete social collapse, with riots, civil war and deaths not far behind.

That is precisely what the video shown below has captured. In the clip, a demonstration against Venezuela’s poor transportation services quickly turned violent. End result: one person dead from a gunshot wound, more than 80 arrested and four shops looted on the Manuel Piar Avenue in San Felix.

What is most disturbing is how comparable to an open war zone what was once a vibrant, rich and beautiful Latin American country has become.

This is just the beginning: with the ongoing collapse of the economy, the resultant acts of social violence will only deteriorate and claim more innocent lives, until the “socialist utopia” ends as it always does: with the arrival of a military coup or a full blown civil war.