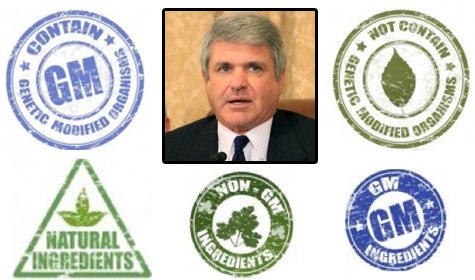 Last week Congressman McCaul voted “Aye” on controversial legislation that strips the states of the option of deciding whether or not to require foods that are genetically modified (GMO’s) have proper labeling before being sold in the respective state to the public.  H.R.1599 – The Safe and Accurate Food Labeling Act of 2015 was sold to the people as being the protection Americans needed to ensure for their health and safety regarding genetically modified foods.  But, those who have read the legislation have branded it as the “DARK Act” as in “Deny Americans the Right to Know” or “Keep Americans in the DARK”.  What the act does is provide security to manufacturers of GMOs so that their product will not be identified as a GMO food unless THEY want it known.  Many people feel that the reason for the act is that Big Ag is afraid that if consumers know what’s in their food, they won’t buy it.

So why was the bill introduced?  Proponents of HR 1599 claim it’s essential to stop the unnecessary food labeling in order to prevent a spike in food prices. The manufacturers claim that the spike will come from the cost burden that would be placed on the food system from the additional labeling if the 50 States were to be allowed to continue establishing their own laws regulating labeling. Yet, many feel that this argument is a red-herring as companies change food labels all the time to highlight innovations that they’ve done to their products.  Also, countries with mandatory labeling have not encountered food price spikes attributable to anti-GMO backlash.

The legislation claims to operate under the authority of the “Federal Food, Drug, and Cosmetic Act,” placing the FDA and the Dept. of Agriculture in control of enforcement.  Congress tells the Secretary of Agriculture HOW to determine labeling:

“For purposes of subsection (a), the use of genetic engineering does not, by itself, constitute information that is material for purposes…”

In other words, the fact that the product IS a GMO, doesn’t mean the Section will have to CALL it a GMO.

“The Secretary may require that the labeling of a food…”

This means that congress says, you can require labeling it if you want to, but you don’t have to if you don’t want to. It is up to the complete and total arbitrary discretion by the Secretary of Agriculture.

But, finally, here is the part that intrudes on the states:

Breaking this section down: If the State WANTS to require labeling of GMO & the feds say no, then the State is prohibited from engaging in Safe & Accurate labeling of food.

So, when will it be forbidden to actually call a GMO a GMO?

“(A) for which the Secretary of Agriculture has approved a petition under section 340.6 of title 7, Code of Federal Regulations (or any successor regulations), for a determination that the genetically engineered plant should not be regulated under this Act;”

When power is arbitrarily placed in the hands of one agency or one man (i.e. the Secretary of Agriculture) where is the possibility that “safe and accurate” will be the driving force? I think one can see the lobbyists at work on this legislation.