An Unhappy Summer for Liberty 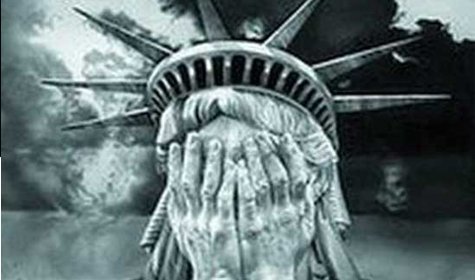 At the root of the chaos in the Middle East and here at home are governments that respect no limits on their exercise of power. Public officials — who are supposed to be our public servants — routinely behave as if they are our masters. They reject the confines of the Constitution, they don’t believe that our rights are inalienable, and they fail to see the dangerous path down which they are leading us.

It is a path to an authoritarian America, predicted by the British writer George Orwell in his dark and terrifying novel “1984,” in which governmental power was fortified by fear at home and war abroad.

President Obama has dispatched 60,000 NSA spies to monitor the cellphone and landline calls, as well as the emails, texts, bank statements and utility bills, of nearly all Americans, in utter disregard for the constitutional standard required for doing so: probable cause of criminal acts by the persons spied upon. Yet his spies somehow missed the Boston marathon bombing, Russia’s invasion of Ukraine and theft of Crimea, the downing of the Malaysian civilian airliner and the growth of ISIS in the Middle East.

ISIS was fomented by the tragic, immoral and illegal American invasion of Iraq. That invasion was carried out under the false pretenses that the United States needed to find the weapons of mass destruction we had sold to Saddam Hussein. The Iraq war cost the lives of 650,000 Iraqis and 4,500 Americans. It displaced more than 2,000,000 Iraqis and, because it was paid for by borrowed funds, added $2 trillion to the U.S. government’s debt.

The consequence of American Middle Eastern imperialism has become the virulently anti-American and viciously efficient fighting force called ISIS. President Bush and his generals and Obama and his spies knew or ought to have known about it. This disciplined group of fanatics is the latest American bogeyman at whom the warmongers are aiming their cries for more American military action and thus more American blood.

Bush was reckless to have fought an unjust war, and Obama is reckless to have misguided our intelligence resources toward Americans and then feign surprise at the growth of this foreign disease right under his nose._ But this is a disease that he and the military-industrial complex will use to terrify us into another useless war. By their standards, any group or government — except for the U.S. and our allies — that uses violence to get its way should be eliminated by more violence. That will literally bring war without end.

Congress is a potted plant. It has permitted Obama — in defiance of the Constitution — to destroy Libya, bomb innocents in Pakistan and kill Americans in Yemen. There is a reason only Congress can declare war: to ensure debate about war, to discover whether there is a legal basis for it, to explore all options to it, and to prepare for its human, geopolitical and financial consequences.

The next domestic political battle will be a fight between the Senate and the CIA, as the Senate Intelligence Committee releases its report on CIA torture. Sen. Dianne Feinstein, D-Calif., the committee chair, has accused the CIA of spying on her and her staff, and just as Congress began its summer break, CIA Director John Brennan admitted the spying. That spying is a felony, and Brennan’s job and his personal freedom are at stake, even as he and Feinstein argue about how much of the report should be released.

Why is this report important? According to those who have seen it, it will demonstrate not only that the U.S. government tortured victims all over the world, but that its techniques were not those revealed and approved by congressional regulators, that the CIA repeatedly lied to its own congressional supporters and, most importantly, that the torture did not produce any material actionable intelligence, including the whereabouts of Osama bin Laden.

The report is also important because in a democracy, all persons have a fundamental right to know what the government is doing. Transparency is a disinfectant for political corruption, and a people cannot be free when the government gets away with law breaking and lying about it.

The other coming domestic issue is the militarization of the police. We learned this summer that in New York City, you can be choked to death by cops while selling untaxed cigarettes, and in Ferguson, Mo., you can be shot in the head by a cop while unarmed — and none of the killers has yet been arrested, charged or prosecuted. This is the result of recent Supreme Court opinions that give the police qualified immunity. That doctrine makes it nearly impossible to sue or prosecute cops who kill innocents so long as they can claim that a reasonable cop would have done as they did. That is no protection from thugs in uniform; it is a license to kill.

And speaking of killing, why do the police in America now have grenade throwers, a weapon that kills indiscriminately and is banned from use against the civilian population by international law? They have them because of a lack of transparency. The Department of Defense in secret gave or sold these weapons of mass destruction to American police departments in secret and thus without the consent of the public, whom the police are supposed to protect.

Locally and nationally, we live under governments that prefer to rule rather than to serve, that choose not to tell us the truth but to keep it from us, and that have enacted laws that purport to make their behavior legal.

In 1949, when he wrote “1984,” Orwell predicted all this, including the secret torture, the perpetual warfare, the continuous spying and the fear of the government. His predictions were right on the mark — he was only mistaken by 30 years.