The Term Limits We Need! 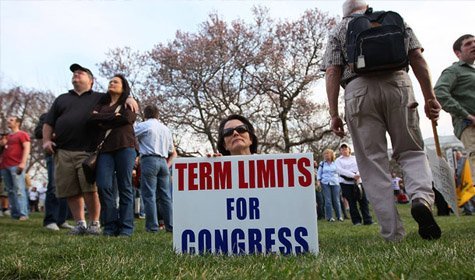 That’s the cry we hear so often today. The question is, “Why are people so dead set on reinventing the wheel?”  Simple answer – we are ignorant of history.  We brag about studying the Constitution, yet the more critical thing to study is Constitutional History.  Our founders ALREADY GAVE US TERM LIMITS and they are the only term limits that will work.  WE GOT RID OF THEM.  All of today’s term limit proposals are too long – the founders gave just exactly the right term limit length – INSTANTANEOUS. It was called RECALL and it WAS in the Constitution.

We do not need to establish new term limits; we need to restore the ones we had when the founders created this great nation.  Our founders gave us the weapons we need to guard the Liberty given to us by our Creator and we have been derelict in our duties.

“If we are to have a free Republican Government we must have an attachment to the Constitution and a Conscientious determination to support it.”

“the jealousy of a free people ought to be constantly awake”.

“God grants Liberty only to those who love it and are always ready to guard and protect it.”

“the price of Liberty is eternal vigilance.”

That means the couch potatoes will not be the guardians of our children’s future.  We live in a society where more people can name all the judges on American Idol and cannot name even one Supreme Court Justice.  We live in perilous times and we must be armed with the weapons that will bring victory.  One of those weapons is TRUTH and truth is sheathed in HISTORY.  Let us unsheathe TRUTH and cut through the confusion.

Our founders gave us term limits and they were stripped away by the 17th Amendment in 1913, when this country fell for a “pernicious design to subvert liberty.”  Not my words, but words of our founding fathers. The government was originally designed to have our US Senators appointed by the state legislatures. This was intended to protect each state’s power by having direct representation in Congress.  By direct, our founders meant that each Senator that was appointed was subject to automatic recall by the Legislature if the Senator was not performing his duties appropriately.

Since Senators were appointed by the state legislatures, they would carefully watch the Senators and we the people would carefully watch the State legislatures. Our founders knew that government governed best when it governed least and governed at home (and it is much easier to show up en masse to our state capitols than to D.C. – and the politicians know that). James Madison explains,

“An individual who is observed to be inconsistent with his plans, or perhaps to carry on his affairs without any plan at all, is marked at once by all prudent people, as a speedy victim to his own unsteadiness and folly.”

“…it is interested combinations and factions we are particularly to guard against in the federal government, and all the rational means that can be put into the hands of the people to prevent them, ought to be provided and furnished for them.  Where there is a power to recall, trusty sentinels among the people, or in the state legislatures, will have a fair opportunity to become useful…Further the circumstance of such a power being lodged in the constituents, will tend to keep up their watchfulness, as well as the attention and dependence of the federal senators and representatives.”

The founders knew that immediate recall would have two results: it would force the people to be “eternally vigilant” in their watchfulness of the Senate and it would cause the Senate to be constantly checking with the people for proper direction and movement of the government. The Federal Farmer states what we know all too well,

“it is a disagreeable truth, that power perverts men’s views in greater degree, than public employments inform their understandings – they become hardened in certain maxims and more lost to fellow feelings”.

Have we not seen that very truth play out in our own Congress?  They seem to be more concerned about re-elections, special interests, and self-exaltation than the good of the nation. He continues in his very accurate assessment,

“Men may always be too cautions to commit alarming and glaring iniquities: but they, as well as systems are liable to be corrupted by slow degrees…we are not only to guard against what men will do, but even against what they may do.”

America didn’t get into this mess overnight.  Many have said that they “woke up” one morning and realized they no longer recognized the country that we are living in.  That’s because it has been corrupted by slow degrees and its leaders have become unresponsive.

“Men in high public offices are in stations where they gradually lose sight of the people, and do not often think of attending to them, except when necessary to answer private purposes.” ~ Federal Farmer, no. 8

Our Congressmen have become so comfortable in their stations that they no longer think of attending to the people except for election time. The founders’ intention with this principle of automatic recall is clearly stated,

“members of Congress must return home, and share in the burdens they may impose and, therefore, private motives will induce them to make mild laws, to support liberty, and ease the burdens of the people.” ~ Anti-federalist Papers No. 57

In 1913 that all changed. Under the argument that vacancies created by the automatic recall were a great inconvenience to the efficient function of government, the 17th Amendment was proposed.  This amendment removed the automatic recall and the appointment of the Senators by the legislature and put it to a popular vote of the people on a 6 year cycle.  The proponents of this amendment championed this as truly putting the choice of the Senators in the hands of the people.  Only through time can we see that the exact opposite has happened and the fears of the Federal Farmer and our Founders have come to fruition. The 17th Amendment did not give more power to the people, it took power away.  We hear much talk about term limits today.  Why is that?  Because we understand exactly what the Federal Farmer stated; men are corrupted by slow degrees and when they sit in DC too long they no longer think of attending to the people.  The irony is that we had the ultimate term limits to begin with.  What could be a greater power than the people spotting corruption and immediately putting an end to it? So what about term limits? I am not opposed to term limits, just to term limits as they are represented in our day.  My objections are derived from the results that we have already seen.  We have lost that eternal vigilant spirit of the people.  Remember, the Federal Farmer stated that the principle behind automatic recall was to keep the people watching DC and DC listening to the people; when the 17th Amendment was ratified, that principle was defeated. The people were able to fall asleep for 5 years and the Senators were able to not often think of attending to the people, except when necessary to answer private purposes, ie. elections. Following experience as an oracle of truth as Alexander Hamilton notes, we should understand that implementing term limits that give people a limit of two terms or more, will allow people to sleep for a minimum of 11 years instead of just 5.

If we truly want term limits, why wouldn’t we want the term limits that our founders intended, automatic recall. We have to stop bouncing around like blind mice trying to find our way.  Our founders were such prolific writers, their arguments (on both sides) so well formulated and plainly discussed.  They had such an intimate knowledge of their history that they could give direct warnings that are relevant to any time.  Yet, we continue to ignore their warnings and barrel right into the destruction they believed we could avoid.  The term limits we were given in this brilliant plan our founders labored over and developed using over 700 years of historical experience are exactly what we need today.  Very simply stated we need to repeal the 17th Amendment and reinstate automatic recall through the state legislatures – and then, we have all the TERM LIMITS we need!