Tsunamis Most Often Come Without Warning 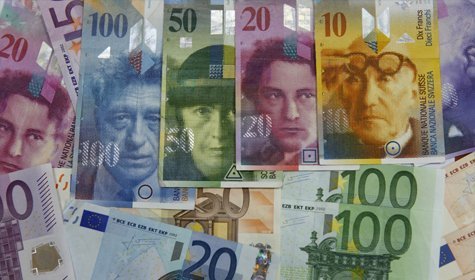 On Thursday, January 15th, the Swiss National Bank (SNB) discontinued its three year effort to maintain its minimum currency floor of the Swiss franc. In a single day the move sent the Swiss Franc (SWF) climbing a massive 21% against the U.S. dollar and 41% against the euro. The move sent shockwaves of unprecedented ferocity through the massive foreign exchange (FX) market, which is by far the largest, and most highly levered, trading market in the world. The monetary tsunami threatened both FX participants and even their brokers. But more importantly, even as the rest of Europe looks to suffocate itself in a blanket of debased currency, the Swiss have opened a window of reality on the massive central bank scheme. Hopefully some of the fresh air will spread throughout the rest of the world.

Most of the so-called developed world has followed the U.S./UK-led ‘Anglosphere’ in pursuit of Keynesian economics, focusing on consumption-based economic growth that can supposedly be stimulated by currency debasement.

On the other hand, the Germans and the Swiss have long been seen as the champions of Austrian economics, which favored an economic growth based on savings, production and sound money. During the second half of the 20th Century this philosophy lent tremendous strength to both currencies and led private investors and corporations to rely on the Swiss Franc and the Deutsche Mark as highly liquid and interest-yielding alternatives to gold as a store of wealth. It is interesting to note that both economies developed strong exports in the post-War years despite the consistently strengthening currencies. The Germans entered the Eurozone in part to protect their exporters. Outside the EU, the Swiss had no such shield.

But the financial crisis of 2008 and the Eurozone crisis of 2011 inspired investors to seek safe haven assets. But with the larger Deutsche Mark out of the picture, the Franc emerged as the only viable currency alternative to the U.S. dollar. This sent the Franc soaring in 2010 and 2011. Panicked that the surging currency would hurt its exports, the Swiss National Bank (SNB) decided to introduce a cap to prevent the euro falling below SWF 1.20. To maintain this peg, the SNB had to expend hundreds of billions of Francs in order to buy euros on the open market, a policy that became increasingly unpopular among Swiss citizens (for more on the this see Peter Schiff’s recent commentary).

As deflation spread within the Eurozone in late 2014, a greater consensus began to build that the European Central Bank (ECB) would finally unleash Fed-style quantitative easing. The euro then began to tumble. On January 14, 2015, the highly politicized European Court of Justice hinted that despite expressed prohibitions in the European Treaty, it would allow the ECB to buy Eurozone-member government bonds.

Furthermore, the Court opined that the ECB should dictate monetary policy, not the judiciary. This appeared to be a deliberate swipe at the German Constitutional Court, seen by many as the EU’s last bastion of honest money. It appeared also to give Draghi a free hand over unlimited QE, possibly in the trillions of euros. This caused the euro to flounder, threatening the SNB with spending even more billions of its peoples’ hard-earned Francs to add to its vast hoard of debased euros.

Apparently, with an economy performing significantly better than those within the Eurozone, the SNB decided that it was time to protect the savings of its people and their way of life. Even at a serious cost to its own exporters, the Swiss felt obligated by national interest to take no further part in the ECB’s scheme of inflation by any means necessary. Time will tell whether the decision is an act of salvation or suicide. Certainly share prices of Swiss exporters like Swatch sold off dramatically with the announcements (at least in Franc terms, but they strengthened if priced in dollars or euros). The world should now pay close attention to the balance sheets of these Swiss corporations. If their earnings persist, the lie that a weak currency leads to growth should finally be laid to rest.  On the other hand, Swiss banks that have lent vast sums in Swiss Francs to foreign borrowers at low interest rates now may experience serious default levels.

But more important than Swatch’s income statement is the effect that the surprise move will have on the world’s foreign exchange markets. Normally, major currencies move only in fractions of a percent in a day. High leverage therefore has been seen as acceptably prudent. In London, where almost half of international currency transactions occur, participants can leverage at 100 percent, if not more, should certain creditworthiness conditions prevail. Gearing up so tightly leaves very little margin for error.

The carnage on January 15th was gruesome. In London, Alpari, in New York, FXCM, and in New Zealand, NZ Limited, were just some of the brokerage firms set to follow many of their customers, like Everest Capital’s $830 million Global Hedge Fund, into vaporization. Perhaps these casualties are just the first in what could become a massacre if currencies were ever to emerge more freely from the control of central bankers.

SNB President Thomas Jordan attempted to soften the impact saying that, “We have a free exchange rate once again.”  Meanwhile, market participants and the central banking establishment were apoplectic.

Possibly, the worst damage has been to the credibility of central bank pronouncements in general. In the future, so-called ‘forward guidance’ on low interest rates likely will become increasingly difficult. Further, the Swiss may be perceived as having ‘left’ the Eurozone. If so, their departure may lend a certain legitimacy for actual members such as Greece to leave also, precipitating fresh concerns about the future of the euro, now the world’s second fiat currency.

In the meantime, gold has rallied considerably, reflecting increasing investor concern. Perhaps investors still heavily committed in bubble markets, and trusting in a well-timed exit if danger threatens, should remember the speed with which the stunning Swiss announcement hit the markets. Although the SNB had denied that any such move would happen, even just days before the knife was thrust, it should reveal to all just how important denial has become in the lexicon of the modern economy. Seismic events occur usually with savage suddenness and seldom gradually. Investors would be well served in looking ahead to future shocks, and structuring their portfolios accordingly.

John Browne is Senior Economic Consultant for Euro Pacific Capital, Inc. Mr. Browne is a distinguished former member of Britain’s Parliament who served on the Treasury Select Committee, as Chairman of the Conservative Small Business Committee, and as a close associate of then-Prime Minister Margaret Thatcher. Among his many notable assignments, John served as a principal advisor to Mrs. Thatcher’s government on issues related to the Soviet Union, and was the first to convince Thatcher of the growing stature of then Agriculture Minister Mikhail Gorbachev. As a partial result of Browne’s advocacy, Thatcher famously pronounced that Gorbachev was a man the West “could do business with.” A graduate of the Royal Military Academy Sandhurst, Britain’s version of West Point and retired British army major, John served as a pilot, parachutist, and communications specialist in the elite Grenadiers of the Royal Guard.