The Trump administration set into motion the process that will allow 3D-printed gun blueprints — first introduced by a Texas man — back online after being blocked from the internet twice.

Trump is transferring authority of some small arms and ammunition exports from the U.S. Department of State to the Commerce Department — a move that will effectively relax regulations that have previously prevented the 3D-printed gun blueprints from being posted online.

The rule change will be posted to the Federal Register, the official record of all government rules, public notices and executive orders, on Jan. 23, 2020. Once posted there will be a 45-day waiting period before anybody can apply for a license to the Commerce Department to post 3D gun blueprints online, according to a Department of Commerce filing of the unpublished rule.

The change will end a long-fought battle by Austin resident Cody Wilson to allow the blueprints to be made publicly available.

Meanwhile, gun control activists warn that the change could make firearms available to dangerous people who would otherwise be prevented from purchasing guns.

But R. Clarke Cooper, assistant Secretary of State for Political-Military Affairs, said in a statement that regardless of which department controls the export, all firearms will remain subject to U.S. Government export authorization requirements, review, and monitoring.

Wilson created the world’s first fully 3D-printed gun, which made its debut in May 2013. Blueprints for the 3D-printed weapon, named the Liberator, were posted on Wilson’s company website, Defense Distributed. Within days, Wilson received a letter from the State Department telling him to take down the plans until he applied for approval for the gun’s multiple components — or else go to jail. Wilson took the plans down, but by that point, they had already been downloaded more than 100,000 times.

The State Department argued that uploading the blueprints online was the same as exporting them internationally. Wilson responded with a 2015 lawsuit that the blueprints were not a product but a form of free speech. 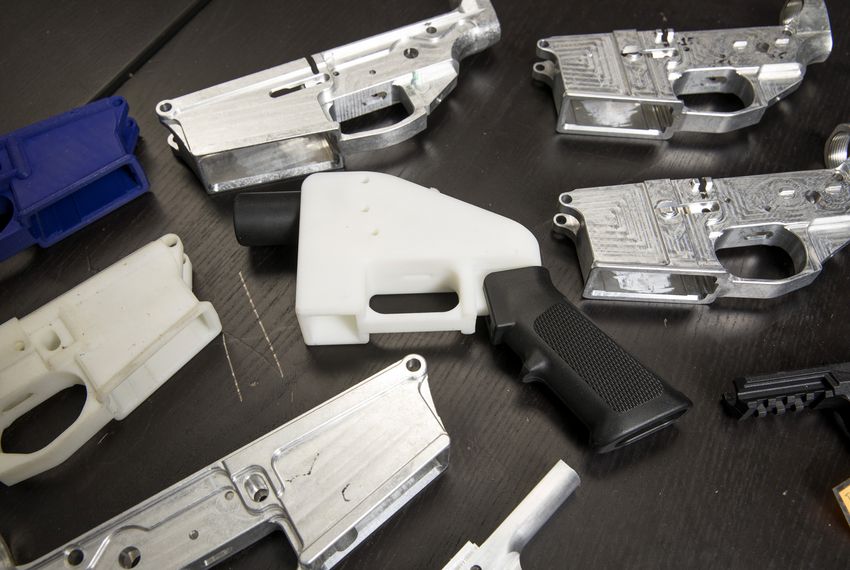 Gun parts at Defense Distributed, a Texas-based company developing and publishing open-source gun designs for 3D printing and manufacture, surround a copy of the Liberator, a 3D-printed plastic gun. Photo by Bob Daemmrich for the Texas Tribune

After multiple appeals, the State Department agreed to settle with Wilson and nearly allowed the plans to go live again, in addition to agreeing to pay Wilson’s company $39,581.

The plans were published online July 27, 2018, after the company received a license from the State Department, but they were blocked days later after a federal judge granted a request from eight states and the District of Columbia to issue a temporary restraining order to stop the settlement agreement from going into place.

Wilson is a gun rights activist and self-described anarchist. Originally from Arkansas, he moved to Austin in 2012 to study at the University of Texas School of Law. It was that year when, inspired by the work of WikiLeaks, he founded Defense Distributed to create the “WikiLeaks for the Second Amendment.” Within a year, Wilson created and released blueprints for the world’s first fully 3D-printed gun.

Wilson saw the buzz around 3D printers in the early 2010s and wanted to make a statement about the future of gun technology, shape public understanding of digital fabrication technology and help people understand that it’s “trivial and easy” to make a gun.

“It’s actually really easy to understand the issue, but people want to cloud it in public safety and security as an imagined talisman that will make all your civil rights go away,” he said.

Last September, Wilson was sentenced to seven years of probation after he pleaded guilty to injuring a child after accusations that he sexually assaulted a 16-year-old girl. He was required to register as a sex offender, according to the Travis County district attorney’s office.

Under the terms of his plea deal and state law, Wilson can own a gun while on probation, and his felony charge will be wiped as long as he fully meets the court’s terms. But Wilson could violate federal law if he registers new firearms, KUT reported.

In Texas, it’s legal for a person to make and own a firearm as long as it’s for personal use and not intended for sale. The person doesn’t need to get a license to make a gun or register such a gun, according to the federal firearms code.

After his arrest, Wilson said he’d step down as Defense Distributed’s CEO, but he is currently the company’s director, he said Tuesday.

The main concerns about 3D-printed guns are that because of the plastic composition, they wouldn’t be picked up by metal detectors, and since they’re homemade, officials can’t trace who owns a 3D-printed gun.

“Allowing gun blueprints to be posted online will enable convicted felons, terrorists and domestic abusers to acquire untraceable guns, and that puts all of us at risk,” said Rob Wilcox, deputy director of policy and strategy for Everytown for Gun Safety, a gun control advocacy group.

Wilcox said the rule change undermines laws and background check systems that regulate gun sales. But Wilson said people have been making their own guns without 3D printers for decades and have never been required to serialize them.

Larry Arnold, legislative director for the Texas Handgun Association, said if the plastic is dense enough, the gun would be picked up by detectors or X-ray machines. Even if it isn’t, the bullets are made of metal and would show up in a metal detector.

Arnold said blueprints for Wilson’s gun and others are still widely available online. A quick Google search confirms this.

“For the government to do all they can to keep something from happening that’s happening anyway seems futile,” Arnold said.

This article was written by STACY FERNÁNDEZ of The Texas Tribune.  The Texas Tribune is a nonpartisan, nonprofit media organization that informs Texans — and engages with them – about public policy, politics, government and statewide issues.  This article originally appeared at:  https://www.texastribune.org/2020/01/14/3d-printed-gun-blueprints-could-soon-go-back-online/