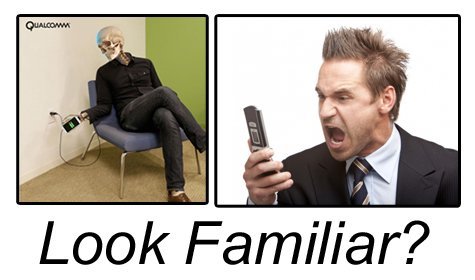 How many times has this happened to you?  You’re running late in the morning, you go to use your cellphone and [oops] you forgot to set your cell to charge last night and your battery is almost dead!  Well, with Qualcomm’s new Quick Charge 2.0 that scenario might not be as frustrating.

Qualcomm® Quick Charge™ is the next generation of fast charging technology for devices powered by Qualcomm® Snapdragon™ processors.  The company claims that with their new technology you’ll be able to charge certain products up to 75% faster.

With Quick Charge 2.0, which is the combination of a phone and charger that both support it, you get a burst of power when your battery is almost fully depleted. The technology attempts to rapidly charge a depleted battery quickly, but as it fills up, the charge slows down to help preserve the integrity of the battery. In other words, you get the biggest jump in battery when your phone is almost dead, hence the reason for companies like Motorola to be able to say “8 hours in 15 minutes” of charging.

The technology is backwards compatible with older chargers and cell phones so you don’t have to worry about that but, you’ll need both to get the numbers that the company is quoting.  Below are videos explaining the technology: