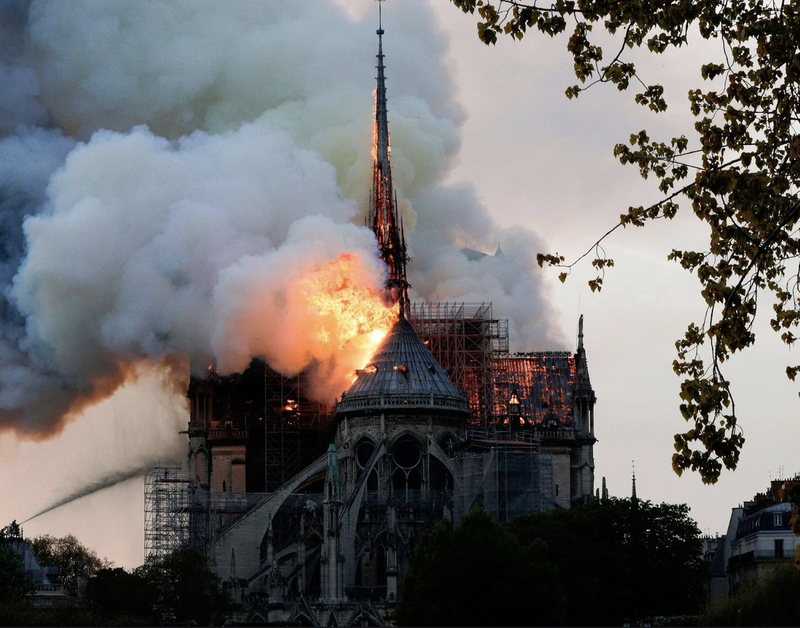 Update 7: Demonstrating just how ineffectual YouTube’s automated systems for filtering out ‘conspiratorial’ content truly are, BBG reports that one of the company’s algorithms accidentally flagged a live stream of the fire at Notre Dame as a “9/11 conspiracy”.

A YouTube feature designed to flag hoaxes mistakenly labeled a live stream of the Notre-Dame Cathedral fire as a 9/11 conspiracy.

Unfortunately, the same cannot be said for the building itself.

Update 5: Though police quickly assured the public that the cause of the fire was ‘accidental’, Paris prosecutors have reportedly opened an investigation into what started the blaze.

As 400 firefighters combat the blaze, the flames have spread to one of the two towers that adorn the facade. The blaze is expected to burn for several hours, and a church official has told reporters that they expect the cathedral to be completely destroyed.

While addressing a round table on the economy in Minnesota, Trump offered more comments on the fire, Trump said the cathedral “looks like it’s burning to the ground.”

Trump: Notre Dame Cathedral is a "great treasure" of the world and the fire is a "terrible sight to behold" https://t.co/afD5YumUJg pic.twitter.com/eGnBD9XSqU

Macron offered his thoughts and prayers to all Catholics in a tweet.

"Deep emotion in the face of this dramatic fire at the cathedral #NotreDame de Paris, inscribed as #WorldHeritage in 1991. @UNESCO is closely monitoring the situation and is standing by France's side to safeguard and restore this invaluable heritage." https://t.co/WsGoSym4gD

Though officials say the fire looks like an accident, it’s certainly curious that ten Catholic churches have been vandalized across France in the span of a week.

10 Catholic churches across France attacked in one week https://t.co/oPpdvBzKYD

With the inside probably irrepairably damaged, if not completely lost, some are sharing photos of the interior of the cathedral. 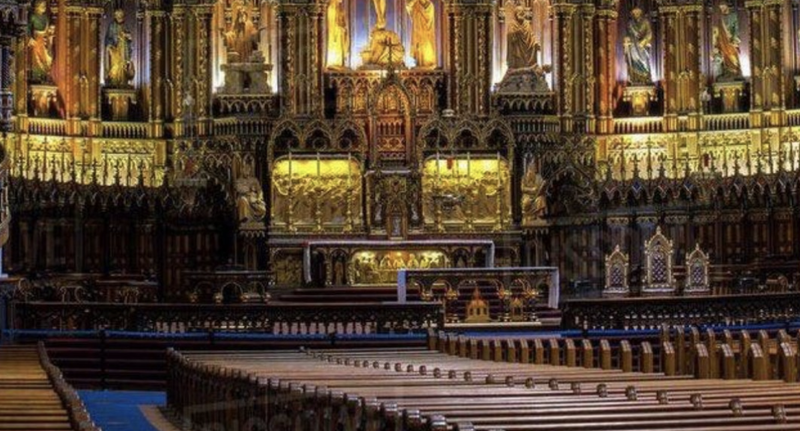 To recap, the cathedral’s 15-foot lead spire has collapsed, and the roof has as well, during holy week on the Catholic calendar, which is a busy season for Paris’s most popular tourist attraction.

Update 4: Though he was tweeting before the spire collapsed, this thread from a former state public safety official in the US offers some insights into the monumental task facing the Parisian firefighters as they rush to save the cathedral.

After my last tweet, I got a couple DMs asking firefighting related questions about the #NotreDameFire.

I -like most of you- are watching from a world away. But if you’re interested in some profession specific things I’d note/be concerned of, you can follow this thread. pic.twitter.com/golMnbYsDK

This is (most likely) what is causing the fire to “run the roof” as seen in the first picture. The fire is essentially burning unchecked.

If it started high in the building, Paris Fire may be able to save the walls, but roof is basically surrounded at this point.

After my last tweet, I got a couple DMs asking firefighting related questions about the #NotreDameFire.

I -like most of you- are watching from a world away. But if you’re interested in some profession specific things I’d note/be concerned of, you can follow this thread. pic.twitter.com/golMnbYsDK

In firefighting there is something called a "trenchcut" that basically opens a large roof up from peak to gutter, allowing space to stop fire spread.

Given the peak of the #cathedral roof and advanced fire conditions, this is an unlikely option in the main area of the building. pic.twitter.com/Rvo96lL1A7

Even if arial waterways (think hook and ladders with prepiped hoses) could reach the roofline, it is difficult to see how they would get an angle that would get water on the fire – its just too high.

So this means you have to put firefighters inside… pic.twitter.com/YhyNZRYzBH

Inside is a whole other problem. The primary option is large 2.5" fire hoses.

These are heavy, difficult to maneuver and against a fire like this, largely ineffective. pic.twitter.com/5tt3yDUpSo

This option also means placing responders on the inside as the roof is falling down around them.

And we aren't talking shingles.

This is heavy timber construction. Often 12"x12" in old churches, perhaps bigger in a #Cathedral this old. pic.twitter.com/RwO3N1Qrjw

Another concern is accountability.

Life safety is always the first priority, even in historic landmarks.#NotreDame was undergoing a renovation. This means that there were more people there than normal.

Is the #Cathedral staff all out?
The construction workers?
Visitors?

If unaccounted for, where were they and how many? What does a rescue task force look like? How many responders do you place in additional harms way for unconfirmed reports?

I don't have these answers at a distance, but the responders on scene are asking them and forming plans.

And lets pause to remember how fires actually burn.

You need oxygen, fuel, heat and a chemical chain reaction.

If you take any one of these away (cool material, remove fuel or oxygen, or interrupt the CCR) the fire will go out. pic.twitter.com/fgakKat1Mp

Removing the fuel is a no go. Churches have no shortage of things to burn.

The heat that a fire this size is putting off is tremendous. Little options for interrupting that.

The chemical chain reaction is off to the races. That horse left the stable in the first five minutes.

That leaves the oxygen.

Unfortunately, even if the roof had not burnt off, churches are nearly impossible to control ventilation in.

Their design is to be open and airy. Great for Sunday worship, terrible for managing fire spread. pic.twitter.com/08KbCViTTX

The walls of #NotreDame are stout, but if weakened by fire and roofing timbers could come down.

Are the streets in the collapse zone cleared? Of both onlookers and responder/trucks? Any other buildings threatened?

If a wall of fire comes down what the plan to fight THAT fire? pic.twitter.com/1kgepGctXW

My gut (and experience) tells me that best case scenario her is something similar to Orthodox Cathedral of St. Sava Fire in NYC.

At least for the main part of #NotreDame that has been affected by fire. pic.twitter.com/k0m7r2Aobp

In short: Saving the cathedral might be an impossible task.

Update 3: It’s looking increasingly likely that the cathedral will be burned to the ground after a church spokesman confirmed that its entire frame is on fire after the spire collapse. The government is desperately trying to save the artwork inside the cathedral.

PARIS (AP) – A church spokesman has told French media that all of Notre Dame Cathedral's frame is burning after spire collapsed.

French firefighters are still putting together a plan to put out the blaze. The cathedral’s location on a small island in the middle of the Seine certainly isn’t helping.

Helicopters are being discussed according to French media. Fire hoses can't reach the high roof. https://t.co/g39wm5S34X

This is an extremely difficult intervention for firemen. Most of the areas burning edge the Seine river so they are struggling to find places to position the water hoses. And the height of the roof makes it difficult to reach.

Though the cathedral has endured a number of threats during its more than 850 year history, the damage from today’s fire is unprecedented, one source claimed.

Although I like the sentiment, the Church was desacrated during the Revolution but the damage today is unprecedented. https://t.co/IstiPvNZYy

The cathedral was ransacked during the French revolution, but was largely rebuilt in the 1840s. The spire that collapsed went up about 150 years ago. 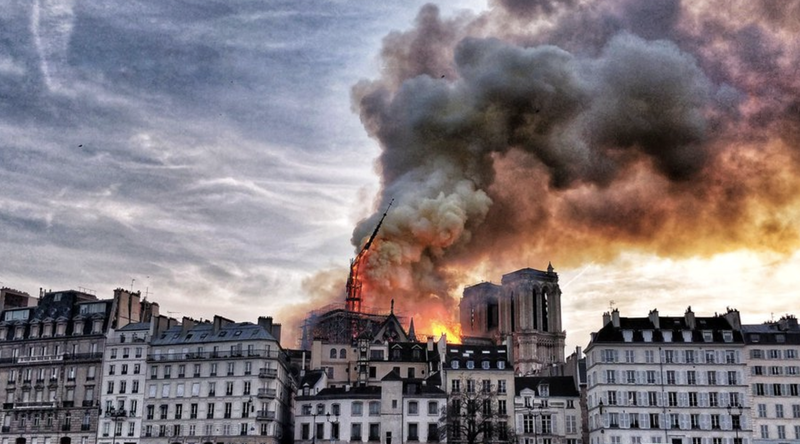 Update 2: The cathedral’s spire and roof have now collapsed.

BREAKING VIDEO! THE SPIRE AT THE NOTRE DAME CATHEDRAL HAS JUST COLLAPSED.pic.twitter.com/p1zTyPNXXD

BREAKING NEWS: THE ROOF FROM THE NOTRE DAME CATHEDRAL HAS ENTIRELY COLLAPSED.pic.twitter.com/4J5NgD2ftM

Since officials are blaming the fire on an ‘accident’ related to the renovations…just imagine renovating one of the world’s most historic landmarks then accidentally burning it to the ground. 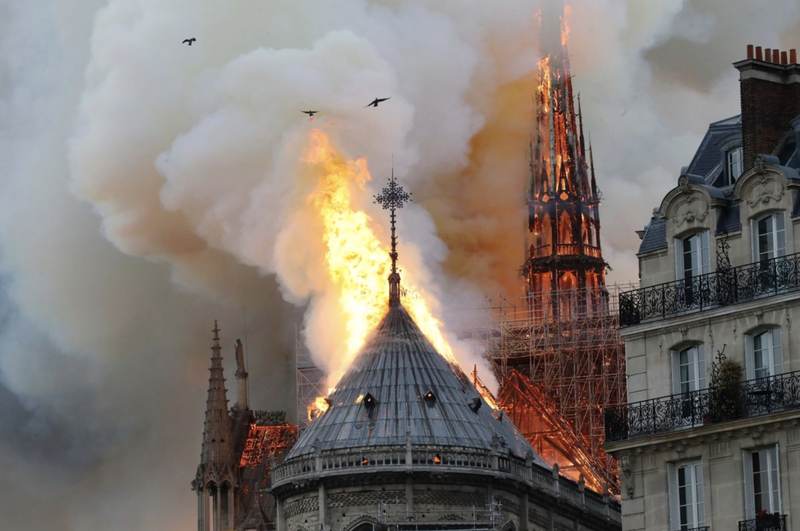 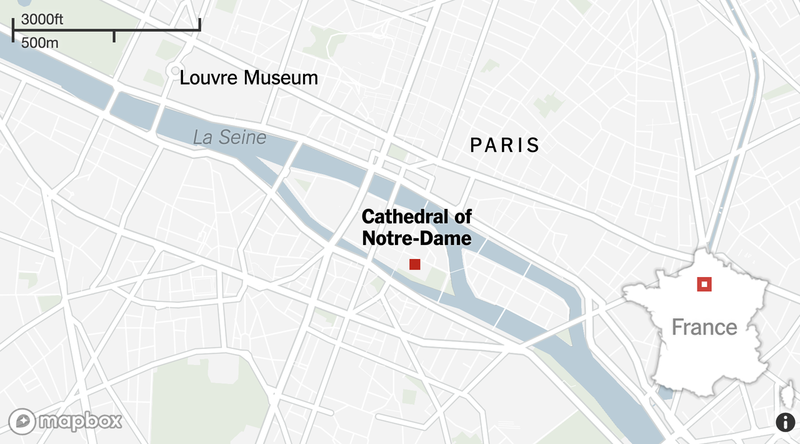 Update: President Trump has weighed in on the blaze, urging parisian officials to act quickly to save the cathedral.

So horrible to watch the massive fire at Notre Dame Cathedral in Paris. Perhaps flying water tankers could be used to put it out. Must act quickly!

Here’s a live feed of the fire.

At this point, firefighters attacking the blaze are treating it as an accident somehow related to the “massive” construction happening at the cathedral, which was being renovated. Police later confirmed that the fire was an accident linked to the renovation work. The cathedral had been undergoing a $12.5 million renovation financed by the French state, after the Catholic church in France launched an “urgent” campaign to raise funds for the renovation, because the cathedral was starting to crumble.

Cracks had started appearing in the stone at the cathedral, sparking fears that it could become unstable, according to the BBC.

If there’s a silver lining, many of the historic statues were removed by crane just last night.

Meanwhile, the fact that the cathedral caught fire at the beginning of holy week, a time when catholic tourists have flocked to the city, added a layer of irony to the fire.

At this point, it looks like the cathedral’s spire has been totally destroyed.

BREAKING NEWS UPDATE: The entire spire at the Notre Dame Cathedral in Paris, France is on fire.pic.twitter.com/YpA7Im8Ri2

French President Emmanuel Macron has postponed a policy speech to attend to the disaster. He had been planning to address the nation to announce plans to address the concerns of the gilet jaune protest movement. Monday night but that speech has reportedly been cancelled.

A spokesman for the cathedral said the fire began around 6:30 pm local time, or around 1:30 pm ET. 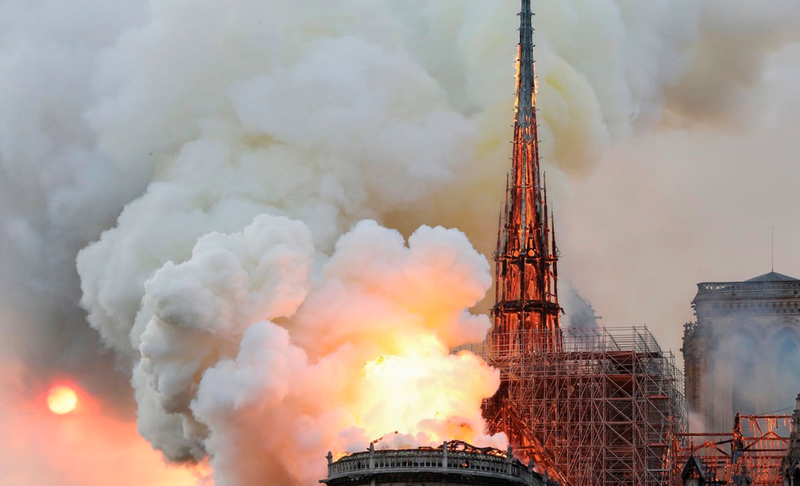 It’s unclear how it started or what, exactly, is going on, but the historic Notre Dame cathedral caught fire on Monday, and photos and video circulating on social media suggest that conflagration has engulfed the historic monument.

Photos have been circulating on social media: 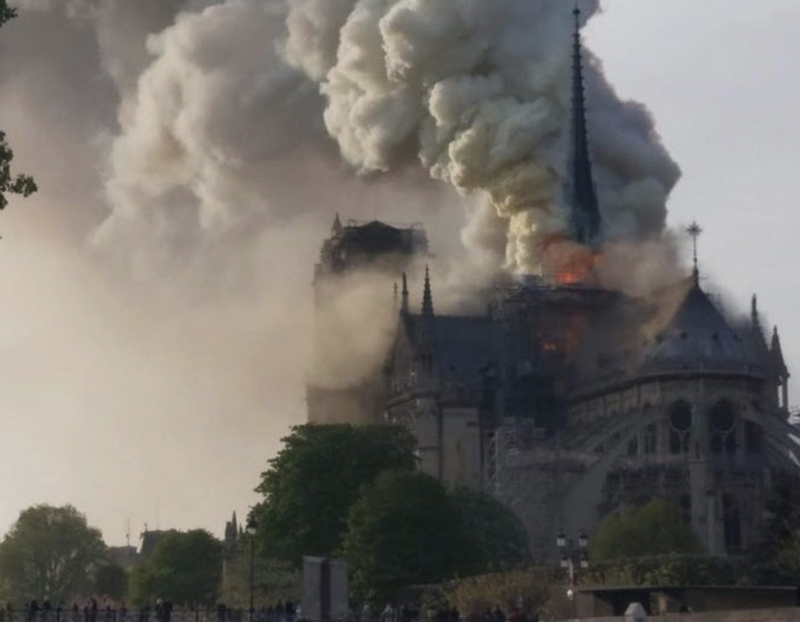 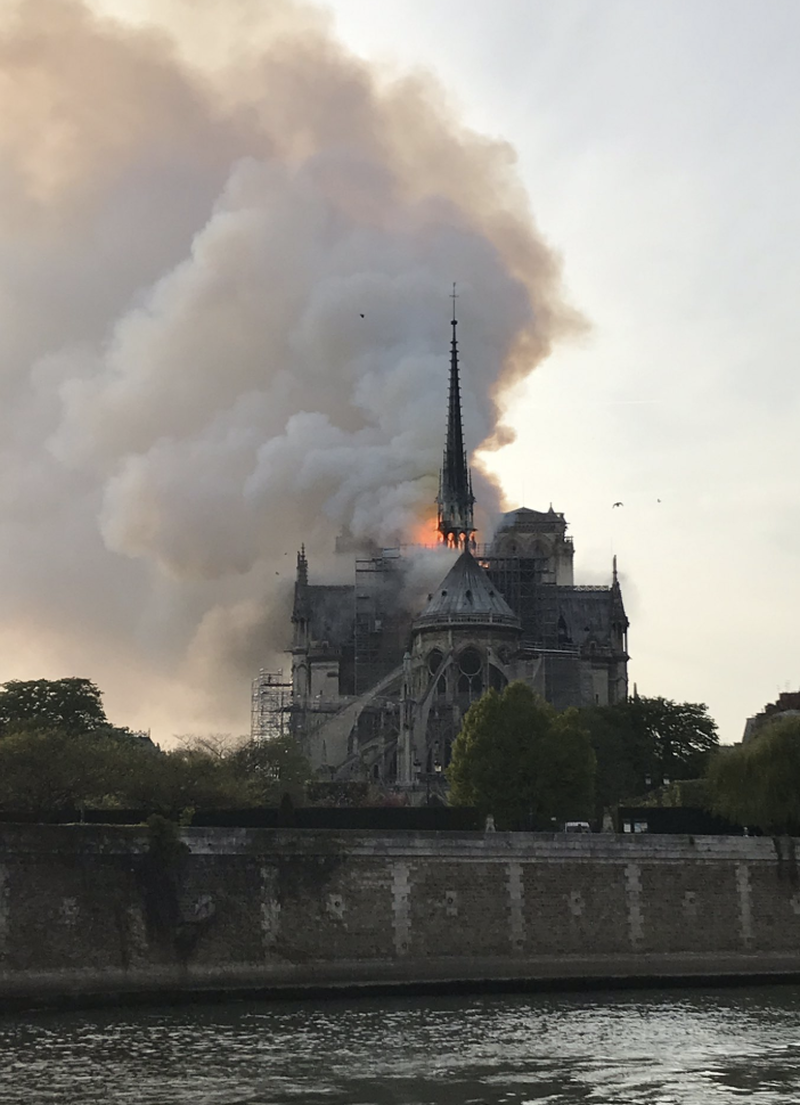 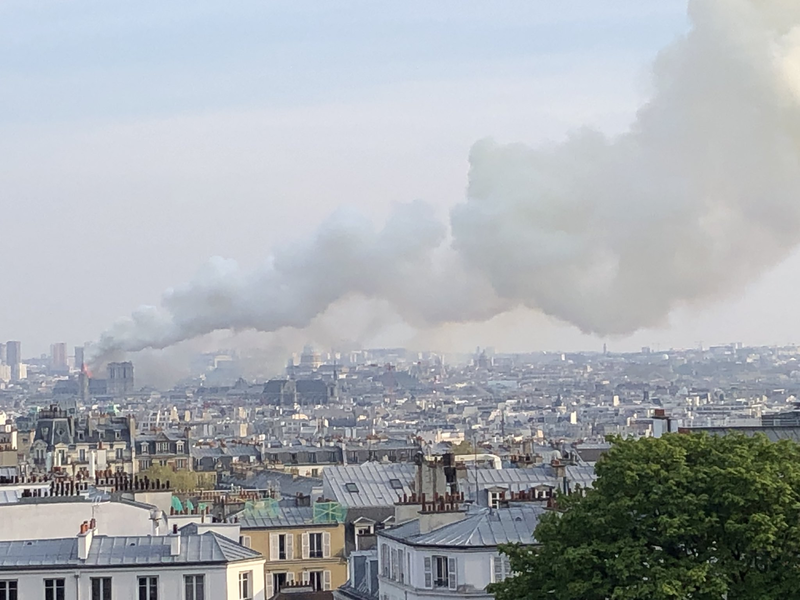 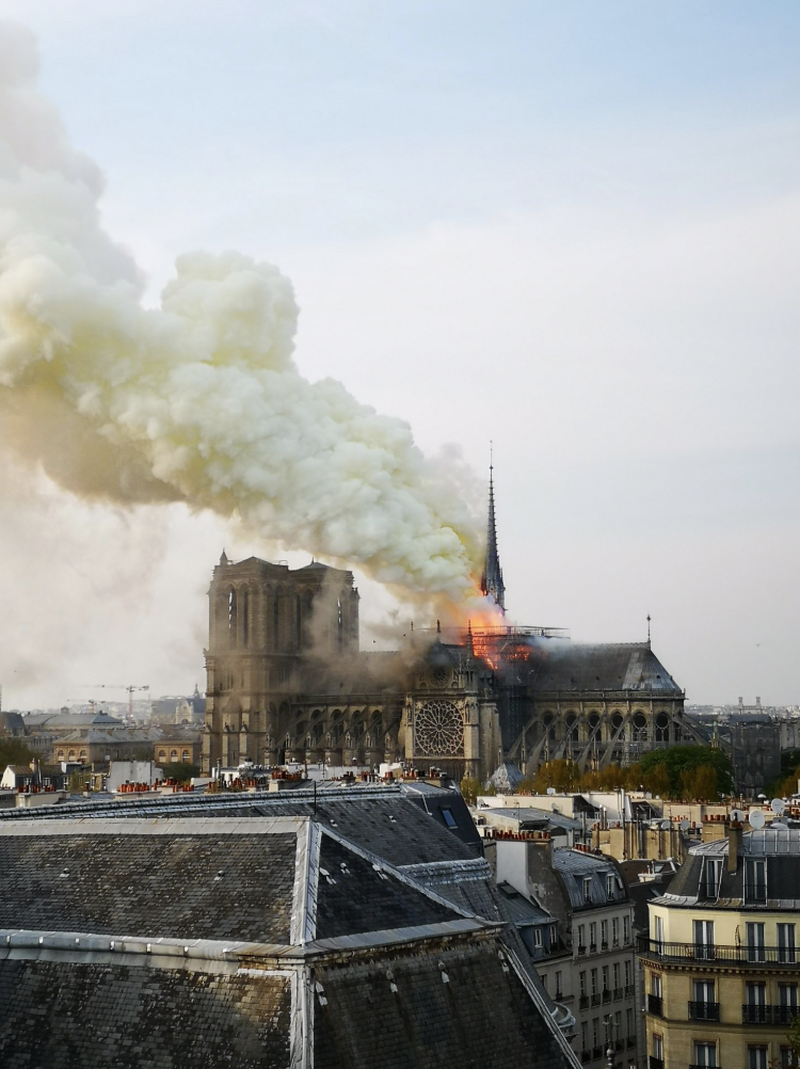 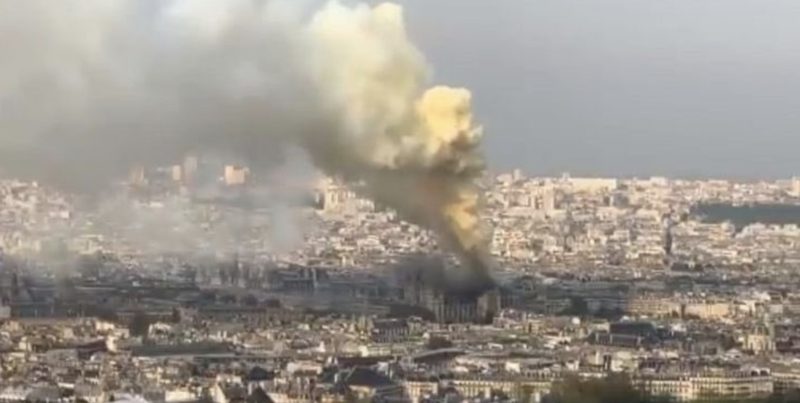 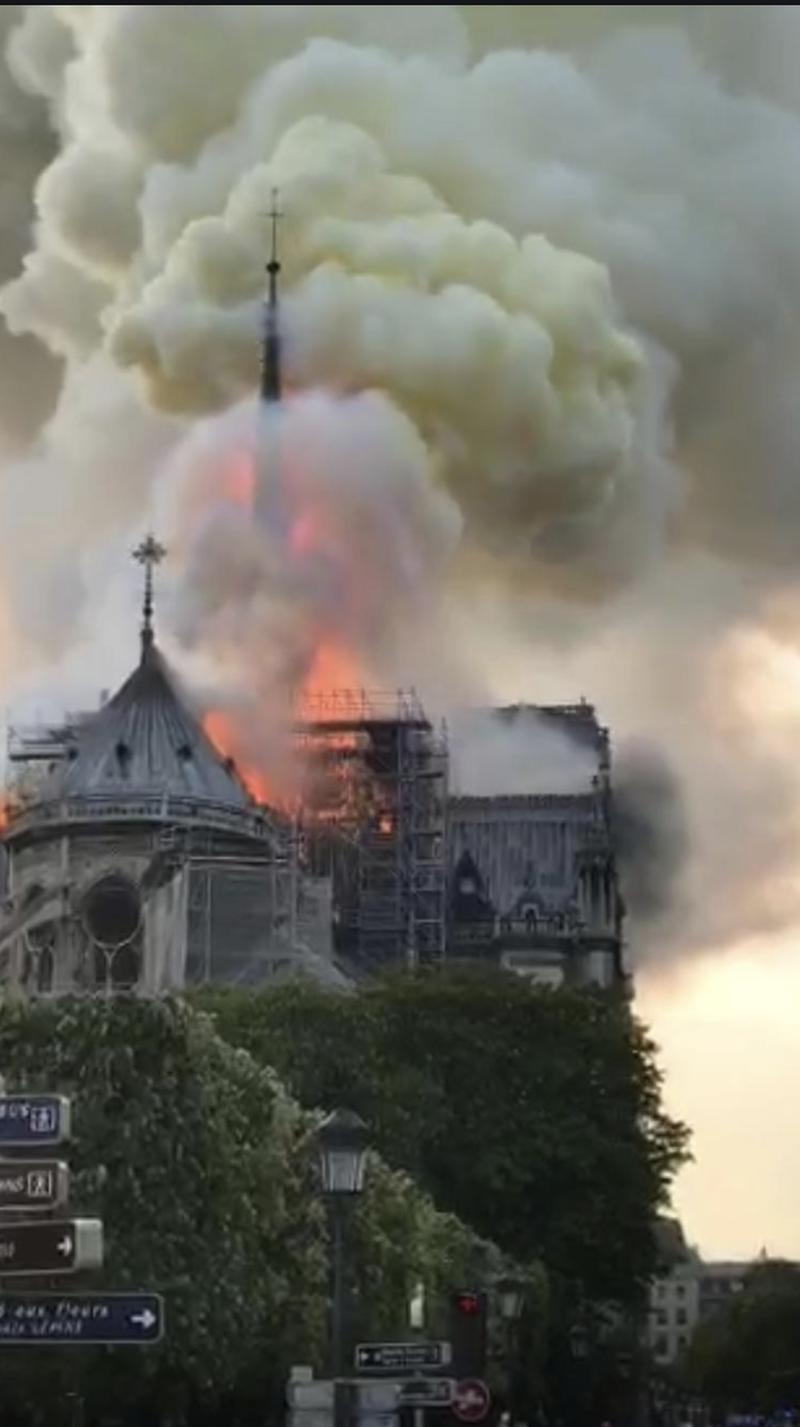 The intensity of the flames coming out of Notre Dame Cathedral in Paris… pic.twitter.com/JDAMCXFMk4

#Update: Just in – Close up Video of The iconic cathédrale Notre-Dame de #Paris church on fire. #NotreDame #France. Video Credit: @Solwii Remember this in one of the biggest Tourist hotspots in France to visit. pic.twitter.com/CORYEaagDd

Notre Dame cathedral in Paris is burning and my heart is breaking. Awful.pic.twitter.com/eduijPfCJN

The cause of the fire at the 856-year-old cathedral isn’t yet clear – though officials said it could be linked to renovation work. Parts of the roof and the cathedral’s skyline-definiing spire were alight, though the true extent of the blaze was difficult to discern. Construction on the cathedral began in 1163 and was completed in 1260. Today, it is the most visited tourist attraction in Paris, drawing 12 million visitors per year, beating out the Eiffel Tower. The cathedral is considered the finest example of French Gothic architecture.

Paris Mayor Anne Hidalgo tweeted about the “terrible fire” and asked people to stay away: “A terrible fire is underway at Notre-Dame Cathedral in Paris. The @PompiersParis are trying to control the flames. We are mobilized on the spot in close connection with the @dioceseparis. I invite everyone to respect the security perimeter.”

The situation is a terrible tragedy as one of the most revered monuments in all of Catholicism looks like it could be completely destroyed, a historical tragedy that would be practically unrivaled in modern times.

We think this calls for a little levity.

This article appeared at ZeroHedge.com at:  https://www.zerohedge.com/news/2019-04-15/stunning-images-show-frances-historic-notre-dame-cathedral-engulfed-flames?fbclid=IwAR29QmVfqQ9RilPS_8vPogLu-X-iuYlOuoMZSiyJO_U792zqVaCjglU3Dik