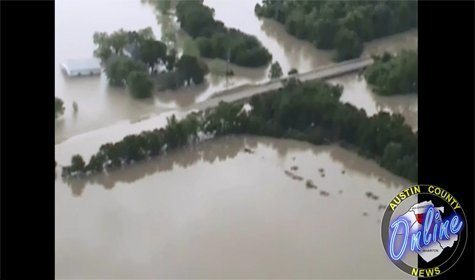 Austin County Sheriff Jack Brandes gave a video presentation of footage that he took from his airplane showing the massive flooding that took place in Austin County last week.  He first addressed the court and thanked the EMS and City of Sealy.  He explained how the command stations in Sealy and Bellville coordinated to take care of emergencies in the county as they came from the flooding.  He stated that no matter what municipality, everyone worked together.

County commissioners also took turns thanking not only the first responders but, many from their own crews.  Randy Reichardt stated that Austin County was quite lucky to get all of the rescue boats and that other counties were not as lucky to have access to rescue boats.

The video below is of the commissioner’s court thank you’s and the video presentation by Sheriff Brandes.  The aerial footage of the flooding begins at the 00:07:03 mark of the video.