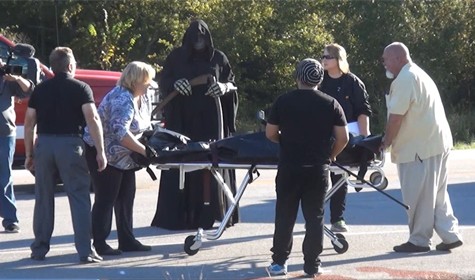 Last week on Highway 36 in front of Faith Academy in Bellville there was a horrible accident that involved two cars with one fatality, one being taken to the hospital via life flight as well as several others taken via ambulance to the hospital.  One teen was taken into custody and charged with drunk driving.  But, this wasn’t a real wreck, it was part of a simulation put on by the Austin County EMS in conjunction with other county and city departments in an effort to teach teens the dangers of drinking and driving.  The Shattered Dreams program is described as,

“…a two-day, school-based program that promotes responsible decision-making among high school students regarding underage drinking and impaired driving (driving after drinking or riding with a drinking driver) by showing them how irresponsible choices can end all dreams.

The program was developed by the Bexar County DWI Task Force Advisory Board on Underage Drinking in 1998 as an expansion of the “Every 15 Minutes” program introduced in Chico, California. The “Every 15 Minutes” program was started by the Chico Police Department and named to signify the number of alcohol-related fatalities in the United States during the mid-nineties. The Shattered Dreams program emphasizes the results of alcohol-related crashes: the shattered dreams of those who drive after drinking, the innocent victims, and their friends and families.”

Because of the extensive nature of coordination of people and services, school administration and faculty, students, parents, community organizations, law enforcement, emergency medical services, and area hospitals will begin the planning and implementation of the activities up to a year in advance of the program.  The program is funded by community and foundation donations but, anyone can and is encouraged to donate.  The two days of the program consist of a staged but, real-life looking accident for the students to watch, followed by several students being selected to be “claimed” by the grim reaper to signify the deaths that occur from drunk driving.  The time used to be every 15 minutes but, that time has increased to every 20.  Those involved in the mock accident along with those claimed by the reaper will spend the evening at a retreat.  The following day a memorial service is held with parents and students speaking as well as those who have been tragically affected by drunk driving.

The two videos below are of the entire mock accident as well as an interview with the Austin County Coordinator for the Shattered Dreams program, Jacqueline Scarborough.  We also interviewed a couple of Faith Academy Students as well as a parent whose child was called by the grim reaper during the day’s events.