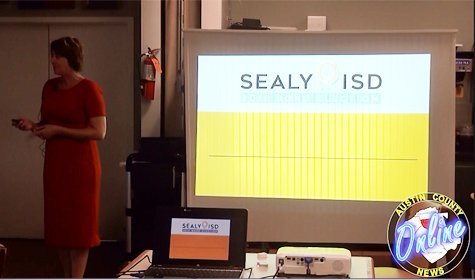 The Sealy ISD is seeking voter approval for a bond proposal totaling $43,223,000.  The bond election will be on May 7, 2016.  Sheryl Moore, the Sealy ISD Superintendent, gave a presentation Tuesday at the Sealy Rotary Club’s meeting.  Her presentation focused on explaining where the number for the bond figure came from, how the money will be used as well as who was involved in helping to arrive at that figure.   She also explained where Sealy aligns in the State of Texas in relation to other school districts throughout the state.

The $43,223,000 was arrived at after great analysis by the district.  They began the process by soliciting different architectural firms throughout the state to submit their qualifications and ended by interviewing six of them.  They also brought three more back and finally decided on Huckabee Architectural Firm.  The firm did a district wide facility assessment and submitted their findings.  Teachers of the district were also interviewed to give frontline input on the district’s current facilities as well as input on the needs of the district for the future.  A demographer was also hired to help give projections for future growth of the area and the needs the district would have to account for to service it.  A financial analyst crunched the numbers of debt load versus the community’s ability to re-pay via their school taxes.  A committee composed of 23 individuals from throughout the community reviewed all the information over the course of four months and arrived at the figure that was then provided as a recommendation to the board of trustees.

What the process above revealed about the Sealy ISD schools were that:

A proposed grade realignment has been proposed as part of the solution.   The realignment would come in the form of two pre-K through five campuses being added to the district.  By creating two elementary schools to handle grades pre-K through fifth would eliminate the intermediate school thereby leaving an empty building for the district to utilize to accommodate further junior high student growth.   This was the most economical solution to the situation that the data provided.

According to Ms. Moore’s presentation, Sealy ISD’s tax rate is the second lowest in the area coming in behind Navasota ISD.  This tax rate has held steady for the past 6 years.  And, even though Bellville ISD and Sealy ISD have the same tax rate a homeowner of a $100k home will pay $252 less in Sealy.  She did remind the audience that existing state law freezes the dollar amount of school taxes imposed on homeowners 65 years of age or older.  And, senior citizens who have filed their exemptions will not have to pay any additional property taxes associated with the bond proposal.

The video below contains the entire presentation and we encourage all those affected by this vote to watch it: