As world trade volume rolled over in late 2018 and into the new year, a sharp decline in shipping rates across all vessel types forced some operators to scrap their ships in Southeast Asia in the first three months of the year, reported The Wall Street Journal.

In all regions of the world, warning signs are flashing red about the health of developed and emerging economies. The IMF downgraded its forecast for global economic growth for the fourth time in three quarters. We are now in a “significantly weakened global expansion,” according to IMF chief economist Gita Gopinath. 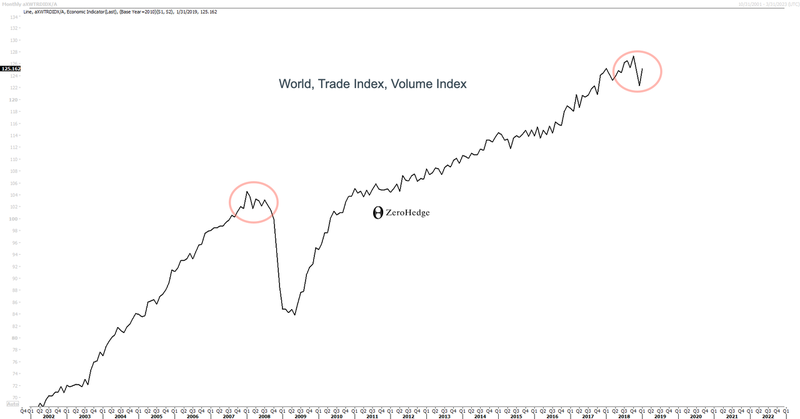 With a global synchronized slowdown in full swing, Chinese imports plummeted by 7.6% in March compared with a year earlier. The decline followed disappointing data in February, when imports dropped by 5.2%, indicating that the demand for vessels transporting raw materials to the country is at its weakest point in many years.

Ship-broker BTIG said in a recent report that 107,000 dead-weight metric tons of ship steel were recycled in 1Q19, an increase of 35% from 78,000 metric tons in the same period a year ago. A total of 23 vessels were scrapped, of that 16 were cape-size.

Ship owners tend to scrap vessels when the cost of operating them or idling them outweighs the price of scrap.

Cape-size vessels charge about $9,000 per day, well below the industry standard of $25,000 needed to break-even. The Baltic Dry index, issued daily by the London-based Baltic Exchange, is a composite of the Capesize, Panamax and Supramax Timecharter Averages. The index is sometimes regarded as a general shipping market bellwether.

The Baltic Dry Index closed at 726-handle on Friday, down 27% in the past year. 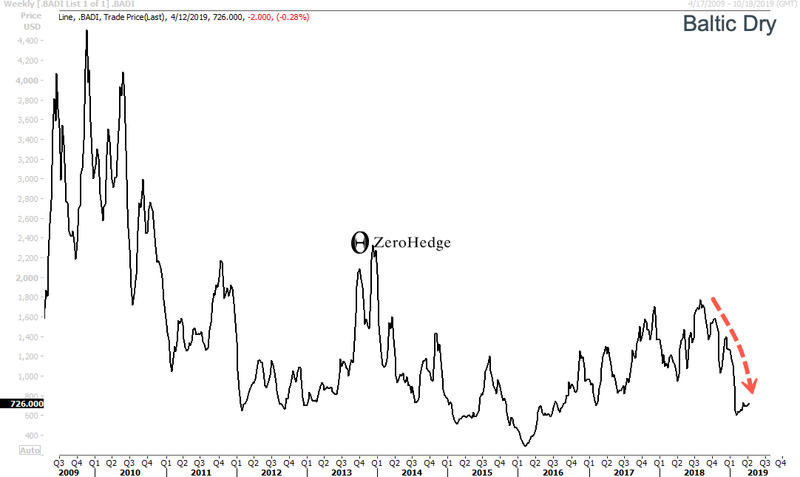 Other Baltic indexes include: 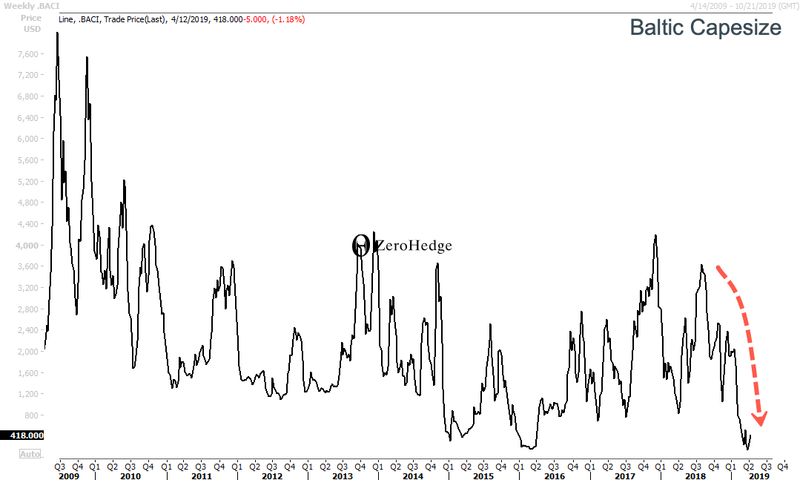 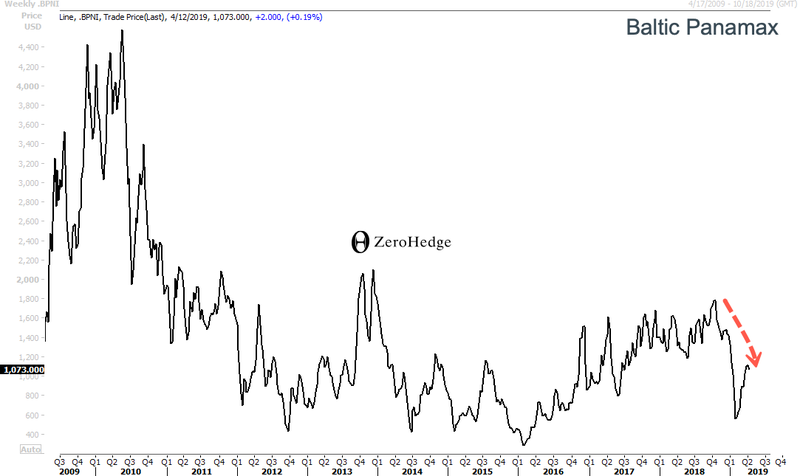 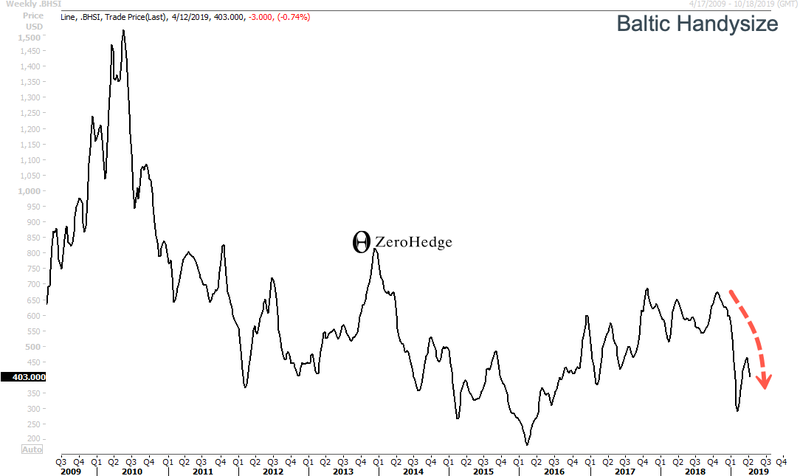 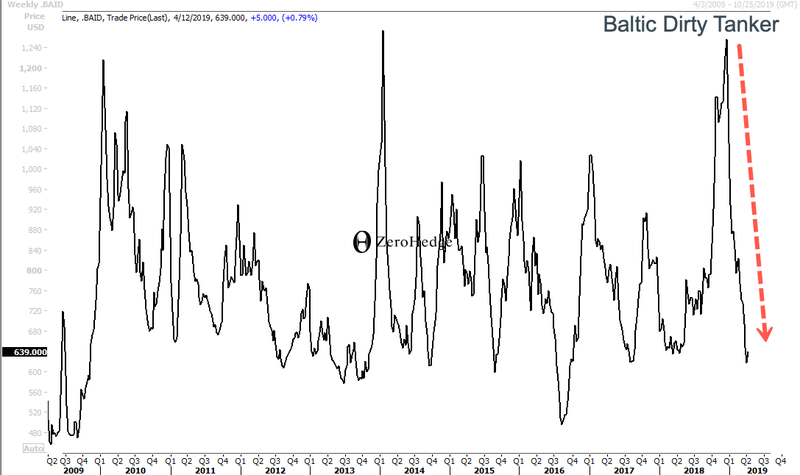 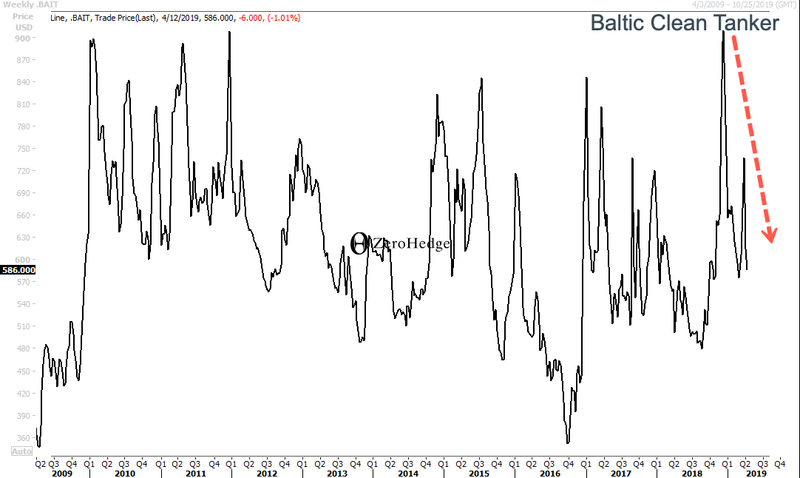 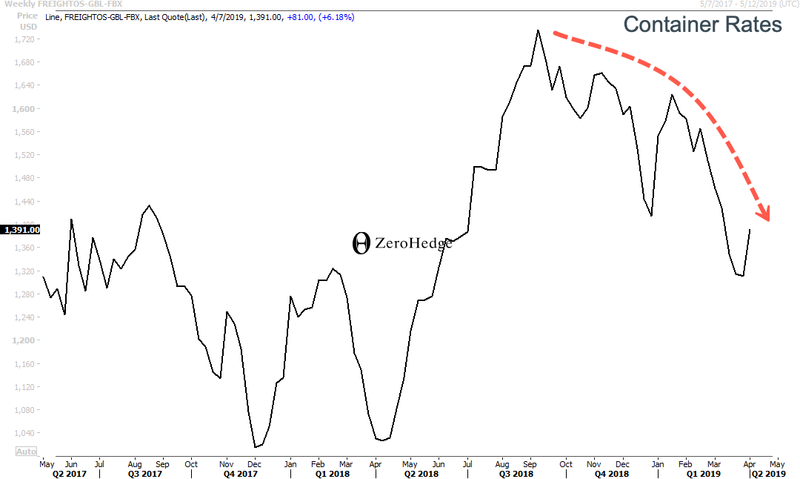 Ship-breaking or ship-demolition industry had annual revenue of $5 billion in 2018. Since the world economy has slowed, late 2018 into 1Q19 has been one of the busiest ship breaking periods on record, according to Anil Sharma, chief executive of U.S. and Dubai-based GMS.

Petroleum tankers and dry bulk vessels were the most common types of ships broken up in the last 12 months.

The trade war between the U.S. and China is a significant factor behind the synchronized global slowdown.

Chinese data on Friday revealed that auto sales in the country dropped by 5.2% on the year in March. 2018 sales fell for the first time in three decades, sounding the alarm that American and Europen carmakers could experience slowing demand in one of the world’s hottest markets.

Germany, the most significant economic power in Europe, will be slashing its economic growth prospects for 2019 in the coming weeks, a government source told Reuters Friday. This reflects a broad slowdown across the Eurozone area, as a recession in Germany’s manufacturing sector worsens.

As a global synchronized slowdown wreaks havoc in the shipping industry, it’s likely that the industry will continue to see record ship breaking volumes into 2020.

This article appeared at ZeroHedge.com at:  https://www.zerohedge.com/news/2019-04-13/record-shipping-breaking-suggests-world-economy-slowing