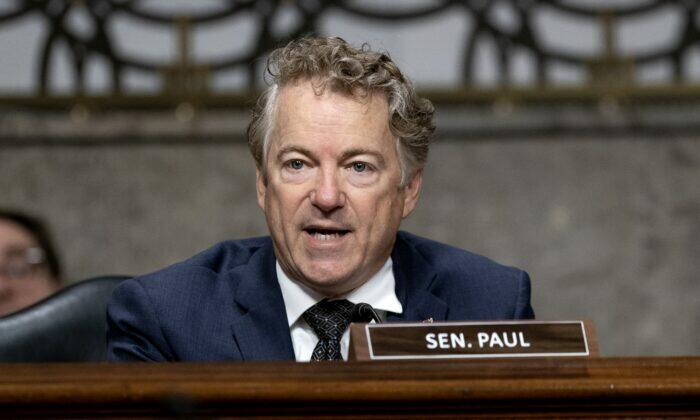 While leaders were unanimous in their agreement to proceed with passing the package this week, Paul refused to do so until changes are made to the legislation that will ensure an inspector general can monitor exactly how the billions of dollars are being spent.

The legislation has been approved by the House and has strong bipartisan support in the Senate, and is still likely to pass.

However, Paul’s objection signified a departure from the overwhelmingly supportive stance that Congress and the Biden administration have so far shown for Ukraine as Russian President Vladimir Putin continues with his “special military operation.”

The GOP senator, a libertarian who often opposes U.S. intervention abroad, argued that the extra spending outweighed that which the United States currently spends on multiple domestic programs, and raised concerns over how it could potentially further exacerbate federal deficits and inflation in the country, which currently stands at a 40-year-high.

Paul noted that inflation “doesn’t just come out of nowhere” while pointing to deficit spending, noting that the United States spent almost $5 trillion on “COVID-19 bailouts” which have led to sky-high levels of inflation.

“Americans are feeling the pain, and Congress seems intent only on adding to that pain by shoveling more money out the door as fast as they can,” the Republican said.

The approximately $39.8 billion package for Ukraine includes $6 billion for security assistance to its military and national security forces and $8.7 billion to replenish stocks of U.S. equipment sent to the country.

It also contains $3.9 billion for European Command operations and would also authorize an additional $11 billion in Presidential Drawdown Authority, which would allow Biden to authorize the transfer of articles and services from U.S. stocks without congressional approval in response to an emergency. Biden had asked for $5 billion.

Another $4 billion would go to Foreign Military Financing, providing Ukraine and other countries with additional support to build and update their capabilities.

If approved, it would bring U.S. support for Ukraine since Russia invaded to nearly $54 billion, on top of the $13.6 billion in support that Congress passed in March.

Paul noted that the United States has provided more than $6 billion in security assistance to Ukraine since 2014, and said that if the latest amount is passed, it would see total aid equaling the entire military budget of Russia.

“And it is not as if we have that money lying around. We will have to borrow that money from China to send it to Ukraine,” he said. “The cost of this package we are voting on today is more than the U.S. spent during the first year of the U.S. conflict in Afghanistan.”

The senator also noted that the billions of dollars in funding towers in comparison to what the United States spends on cancer research annually—$6 billion—and is more than the government collects in gas taxes each year to build roads and bridges. It nearly equals the entire State Department budget, he said, and exceeds the budget for the Department of Homeland Security and the Department of Energy.

Specifically, Paul asked that a special inspector general be created to oversee how the military aid to Ukraine is spent.

But Democrats objected to Paul’s plan because it would expand the powers of an existing inspector general whose current purview is limited to Afghanistan.

“Congress should evaluate the cost of going down this path,” the senator said, adding that, “the biggest threat to the United States today is debt and inflation and the destruction of the dollar” and that “we cannot save Ukraine by killing our economic strength.

Senate Majority Leader Chuck Schumer (D-N.Y.) and other Democrats opposed Paul’s push to change the language and instead offered to have a vote on it, but that offer was rejected.

That means lawmakers will now vote on the passage of the measure again next week in hopes of advancing it.

“It’s clear from the junior senator from Kentucky’s remarks, he doesn’t want to aid Ukraine,” said Schumer on Thursday. “All he will accomplish with his actions here today is to delay that aid, not to stop it.”

The Epoch Times has contacted Paul’s office for comment.

The Associated Press contributed to this report.