Police Departments are Over-funded: It’s All About Priorities 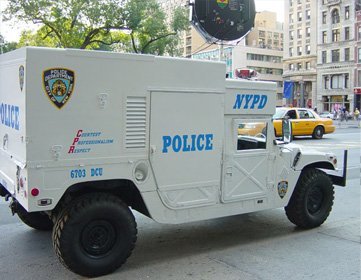 Based on a reading of reader comments below articles about Ferguson, Missouri, some people seem to be under the impression that the police help people recover stolen property, and that we’ll all appreciate the police if we’re ever a victim of property crime.

Everyone who has ever owned a small business or otherwise been burgled, however, knows that when you are a victim of property crime, calling the police is a mere formality in which a police report is filed, and then sent to the insurance company. You will never see your property again, and you know it, but the police report is necessary for insurance purposes. If it weren’t for the insurance side of things, calling the police would be a complete waste of time. (If the thief gets caught (a rare event), it’s generally because someone snitched, and was certainly not due to the sort of investigative police work we see in fictional TV shows about police. But even if this happens, you’re unlikely to get your property back.)

Actually finding your stolen property is a very low-priority affair for the police. There’s nothing in it for them, since there is no connection between successfully protecting private property and the amount of revenue that the police department “earns.” From a budgetary standpoint, it is far more important for the police to simply assert that they protect property to politicians and, to a lesser extent, to voters. Whether they actually do it is immaterial, since those who are victims of crime have virtually zero say over whether or not the police should be rewarded for their services, or lack thereof.

The situation is further complicated by the fact that police departments receive their funding not through voluntary exchange, but through taxation, which is the coercive redistribution of wealth. Rarely are police budgets ever cut, regardless of the quality of service, and should voters or local government ever suggest that the budget might be cut, the police agencies will immediately respond by threatening to cut enforcement, and it is of course implied that enforcement of laws against violent crime will be cut immediately. Never do the police say “well we’ll just have to cut back on shutting down illegal lemonade stands set up by children, or enforcement of lawn-mowing ordinances and no-knock raids against old ladies.” No, it’s always night time patrols for real criminals that go under the ax first. Meanwhile, police departments are so flush with cash that they can dispatch police officers to go threaten children with overdue library books.

In other words, police respond by cutting the most-demanded services first while the least-demanded services never seem to get cut. Naturally, the police would never dream of cutting back on drug enforcement, because that is a major source of revenue for them.

Part of this stems from the error of viewing all police services as more or less equal.  As Rothbard has explainedhere, there is a big difference between the value of police services which involve the investigation of murders, and police services that involve arresting people for jaywalking.

It is true that everyone pays taxes for a seemingly fixed quantity of protection, but this is a myth. In actual fact, there are almost infinite degrees of all sorts of protection. For any given person or business, [p. 216] the police can provide everything from a policeman on the beat who patrols once a night, to two policemen patrolling constantly on each block, to cruising patrol cars, to one or even several round-the-clock personal bodyguards. Furthermore, there are many other decisions the police must make, the complexity of which becomes evident as soon as we look beneath the veil of the myth of absolute “protection.” How shall the police allocate their funds which are, of course, always limited as are the funds of all other individuals, organizations, and agencies? How much shall the police invest in electronic equipment? fingerprinting equipment? detectives as against uniformed police? patrol cars as against foot police, etc.?

The point is that the government has no rational way to make these allocations. The government only knows that it has a limited budget. Its allocations of funds are then subject to the full play of politics, boondoggling, and bureaucratic inefficiency, with no indication at all as to whether the police department is serving the consumers in a way responsive to their desires or whether it is doing so efficiently. The situation would be different if police services were supplied on a free, competitive market. In that case, consumers would pay for whatever degree of protection they wish to purchase. The consumers who just want to see a policeman once in a while would pay less than those who want continuous patrolling, and far less than those who demand twenty-four-hour bodyguard service. On the free market, protection would be supplied in proportion and in whatever way that the consumers wish to pay for it. A drive for efficiency would be insured, as it always is on the market, by the compulsion to make profits and avoid losses, and thereby to keep costs low and to serve the highest demands of the consumers. Any police firm that suffers from gross inefficiency would soon go bankrupt and disappear.

But of course, police don’t have to worry about supplying what people actually want. They have access to the taxpayer’s wallet. For this reason, we should not be in the slightest bit surprised that in Ferguson, Missouri, the police are not protecting private property, but are more interested in protecting police and making a show of force. “There are no police”  a Ferguson shopkeeper reports. Private property owners have to protect their own property with their own privately-owned firearms, even after being taxed year after year in exorbitant amounts for police “services.”

At the root of this situation is the fact that, as Rothbard noted, the police have no rational method of allocating resources.  Priorities are set by politics. The current situation in Ferguson was set off by a police officer stopping Michael Brown for jaywalking. Some now report that Brown had been involved in a burglary or robbery, but the police (by their own admission) were not involved in responding to this when Brown was stopped. No, the police, instead of attending to property crime, were busy pulling guns on people who jaywalk.

Meanwhile, through the 1033 program, police departments are being armed to the teeth via federal dollars paid for by taxpayers.  Will these extremely-expensive weapons be used to protect people from violent crime? Anything is possible, although the fact that small town police forces now have a variety of armored vehicles and mountains of assault rifles, makes one wonder how that money might have been better spent were the private sector allowed to keep it. Police department, thy name is malinvestment.

Moreover, as William Norman Grigg has pointed out, the Ferguson police department, and many other departments as well, have spent enormous amounts of money on new weapons, and nothing on expanding devices that increase police accountability:

Although it has been armed to the gills through the Pentagon’s 1033 program, the police department has no functional dashcams or body cameras to record “interactions” with the public; the department has received that hardware, but hasn’t gotten around to using it. It’s all a matter of priorities: Military-grade armaments and equipment can enhance officer safety, while video recorders can imperil the career security of abusive police officers. And as the treatment of journalists, both foreign and domestic, by Ferguson police demonstrates, police in that jurisdiction — as elsewhere — are very concerned about the threats posed by video recording devices in the hands of Mundanes.

With 39 percent of murders unsolved every year, but with SWAT teams being used to deliver warrants to nonviolent suspects, and people who smoke joints on occasion,  it’s obvious that there is a disconnect between a priorities list that serves police departments, and one that serves taxpayers. As is always the case, there’s plenty of talk about “reform” and accountability, but the only “reform” that matters is one that involves major budget cuts to departments that don’t enforce laws that actually matter.

Rothbard once suggested that taxpayers should be able to check boxes on their tax returns saying which government departments should receive money. It would be a good idea to also include a checklist for which laws should be enforced. Virtually everyone would check laws against murder and robbery. Far fewer people would demand the enforcement of laws against “kids’ lending libraries” or “adults smoking pot at home” or “sale of untaxed cigarettes.” Then, when the budget is cut, police must stop enforcing laws with the fewest votes.   But I won’t hold my breath.

Ryan W. McMaken is an economist and writer living in Colorado where he has taught political science since 2004. He has degrees in economics and political science from the University of Colorado and is an Associated Scholar of the Ludwig von Mises Institute in Auburn, Alabama. His writings have been published in THE AMERICAN CONSERVATIVE magazine, THE INDEPENDENT REVIEW, and the publications of the Ludwig von Mises Institute.  He is also the author of the book Commie Cowboys: The Bourgeoisie and the Nation-State in the Western Genre