President Trump is expected to sign a Phase 1 trade agreement with China this week that “stops the bleeding” but is no resolution to the trade war, a senior U.S. Chamber of Commerce official said on Monday, quoted by Reuters. 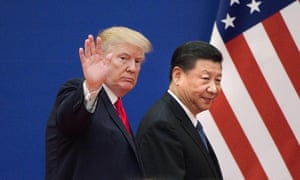 Reuters: Myron Brilliant, the chamber's Executive Vice President, told a media briefings in the Chinese capital that there is "clearly a sigh of relief from both sides" with the agreement and that the depth of the Phase 1 was more positive than initially thought.

Myron Brilliant, the chamber’s Executive Vice President, told reporters at a press conference in Beijing on Monday that there are significant challenges ahead, and a temporary trade agreement is “clearly a sigh of relief from both sides.”

“Implementation of Phase 1 will be important to building trust and certainty, building off the success of the negotiation,” said Brilliant, who said the deal could be signed as soon as Wednesday.

As Phase 1 “stops the bleeding”, he said. “at the same time, it’s important that the two sides demonstrate a commitment to moving forward on the Phase 2 negotiations”.

Brilliant warned that “significant challenges” remain ahead-considering structural issues at the heart of the trade war are unresolved.

Brilliant said he’s been briefed on the text of the trade deal but hasn’t been allowed to view it.

U.S. Treasury Secretary Steven Mnuchin told Fox News on Sunday that China’s commitments on agriculture products haven’t changed during the translation process, and he said the text of the trade deal could be released this week.

Mnuchin said China is expected to buy $40 billion to $50 billion worth of U.S. farm goods per year and total around $200 billion in two years.

China hasn’t publicly made any commitments to the U.S. demands – as we’ve mentioned, hard commitments could be a difficult target for China to meet.

The Global Times said Sunday that the upcoming trade deal between the U.S. and China would cover agriculture purchases to intellectual property rights (IPR) to enforcement mechanisms.

A source told the Global Times that “balance is a highlight of the phase one deal.” “You will see what I mean by this when you see the final text of the agreement,” the source said.

The Phase 1 trade deal is optically pleasing for President Trump during an election year and could further be a catalyst for higher stock market prices. However, the deal hasn’t been made public and there are doubts about how comprehensive the deal is. There’s also concern whether the agreement will be implemented in full by both countries. A full resolution of the trade war could take years.

This Article appeared at ZeroHedge.com at:  https://www.zerohedge.com/geopolitical/trumps-phase-1-trade-deal-stops-bleeding-does-not-resolve-trade-war-says-us-chamber