Over 25% Of College Degrees Have A Negative Return On Investment 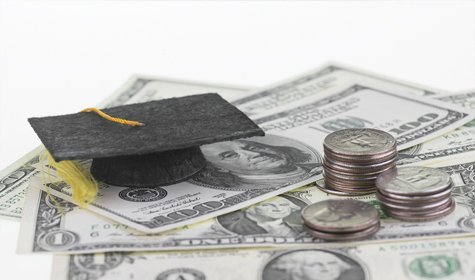 The median bachelor’s degree has a net ROI of $306,000. But some degrees are worth millions of dollars, while others have no net financial value at all… 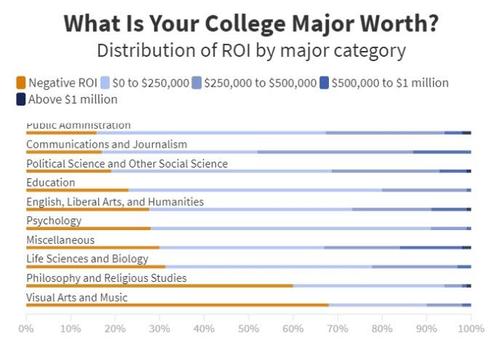 Is College Worth It?

For students who graduate on time, the median bachelor’s degree has a net ROI of $306,000. But some degrees are worth millions of dollars, while others have no net financial value at all.

After accounting for the risk of dropping out, ROI for the median bachelor’s degree drops to $129,000. Over a quarter of programs have negative ROI.

For the most part, students’ earnings with a degree exceed their earnings without a degree. At age 45, the typical college graduate out-earns her counterfactual self by over $25,000 per year. But there are exceptions. About 7% of programs, mostly in art, music, and religion, have higher counterfactual earnings at age 45. In other words, these programs would not pay off even if there were no other costs to college.

ROI varies substantially by major. Sixty-nine percent of engineering programs deliver a lifetime payoff of $1 million or more, and 97% have ROI of at least $500,000. Another strong major is computer science, where 85% of programs have ROI exceeding half a million dollars. Programs in transportation, construction, and architecture also deliver handsome rewards to their students: 77% have a payoff above $500,000.

But plenty of programs have ROI that students might consider disappointing. 68 percent of programs in visual arts and music have negative ROI, meaning graduates are worse off financially for having received their degree. A majority of programs in philosophy and religious studies leave their students in the red, along with 28% of programs in psychology, English, liberal arts, and humanities.

A surprisingly high 31% of programs in life sciences and biology have negative ROI. The most likely explanation is that many students pursue these majors in preparation for a lucrative graduate degree in medicine. The ROI analysis in this report considers returns on the bachelor’s degree alone. If biology students don’t use their degree as a springboard for medical school, they will typically see disappointing returns.

None of this is the least bit surprising. Yet, every year tens of thousands of students pick college programs that make no economic sense.

And that does not account for dropouts where 100% of programs have negative ROI.

Add to that kids pressured into college who would really rather be in a trade.

Parents with kids in high school should read the report and so should their kids. It’s quite comprehensive with a dozen charts.

This article appeared at ZeroHedge.com at:  https://www.zerohedge.com/personal-finance/over-25-college-degrees-have-negative-return-investment