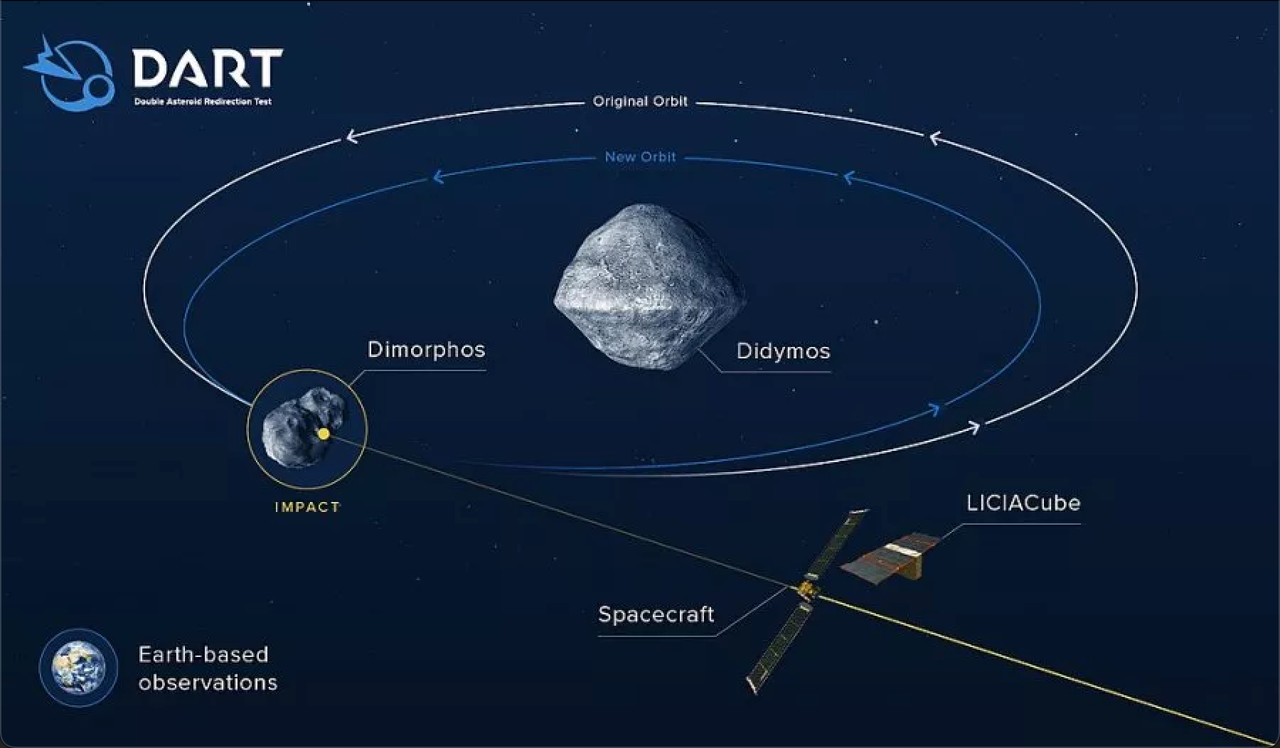 Asteroids orbit the Sun and sometimes come close to Earth. When these space rocks come within 30 million miles of Earth, NASA calls them Near-Earth objects (NEOs). On Nov. 23, the space agency plans to launch a spacecraft into Earth’s orbit that will eventually slam into an asteroid about a year from now, hoping to alter the space rock’s course.

NASA is currently making launch preparations for the Double Asteroid Redirection Test (DART) spacecraft to be catapulted into Earth’s orbit via a SpaceX Falcon 9 rocket on Nov. 23.

“DART will be the first demonstration of the ‘kinetic impactor’ technique in which a spacecraft deliberately collides with a known asteroid at high speed to change the asteroid’s motion in space.

“This technique is thought to be the most technologically mature approach for mitigating a potentially hazardous asteroid, and it will help planetary defense experts refine asteroid kinetic impactor computer models, giving insight into how we could deflect potentially dangerous near-Earth objects in the future.”

Detecting potentially threatening NEOs is part of a larger-scale “planetary defense” program NASA plans to use the kinetic force of a spacecraft to deflect asteroids. It won’t be as exciting as the 1998 sci-fi thriller “Armageddon,” starring Bruce Willis, who landed a spacecraft on an asteroid headed to Earth and detonated a nuclear bomb, saving all of humanity. But the tiny, 1,200 pound DART will collide with a 4.5 billion-year-old asteroid, dubbed Dimorphos, measuring about 525 feet long, at 15,000 mph between Sept. 26 and Oct. 1, 2022.

NASA hopes the impact of DART will slightly alter Dimorphos’ trajectory, causing it to have a new orbit. Here’s an infographic of the mission next year that will cost $330 million.

Nancy Chabot, the lead coordinator for DART, said, “you would just give this asteroid a small nudge, which would add up to a big change in its future position, and then the asteroid and Earth wouldn’t be on a collision course.”

Meanwhile, China has plans of its own to save the planet from a potential asteroid strike, which it outlined this past summer. The National Space Science Centre said it simulated 23 Long March 5 rockets deflecting an asteroid the size of the Empire State Building.

For the sake of US taxpayers, let’s hope this crazy idea can one day save humanity if an asteroid comes dangerously close to Earth.

This article appeared at ZeroHedge.com at:  https://www.zerohedge.com/technology/nasa-crash-spacecraft-asteroid-testing-earths-planetary-defenses