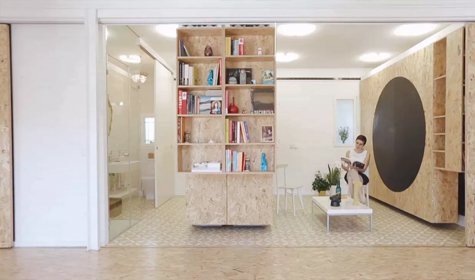 Here’s a very ingenious idea that was featured on WIRED.com of how to make the most out of a living area; try a solution that allows you to have several spacious rooms…just not all at the same time.

KMN developed a solution that allowed her to have several spacious rooms—just not all at once. They outfitted her ceiling with industrial tracks, often used to support the rolling bookshelves at libraries, and fabricated a series of storage units that double as walls. The bespoke boxes weigh nearly a ton each when fully loaded, but can be moved relatively easily.

Pila can create “rooms” by rolling these storage units into a variety of configurations and turn her space into a dressing room, sitting area, boudoir, or kitchen depending on the need.

“The project is about how to allow the coexistence of both configurations, private life and work place, without renouncing spacious pieces for each use,” says PKMN Architecture co-founder and designer Carmelo Rodríguez.