Around 1:43 am est., headlines via Reuters confirmed the bankruptcy and how all domestic and international operations have been halted.

Celadon CEO Paul Svindland told WTHR Indianapolis that the entire company would shut down business operations except for the “Taylor Express” subsidiary in Hope Mills, North Carolina, on Monday.

Svindland said the company will guarantee delivery of their last loads and will instruct drivers where to leave trucks.

“We have diligently explored all possible options to restructure Celadon and keep business operations ongoing, however, a number of legacy and market headwinds made this impossible to achieve,” Svindland said in a press release.

“Celadon has faced significant costs associated with a multi-year investigation into the actions of former management, including the restatement of financial statements. When combined with the enormous challenges in the industry, and our significant debt obligations, Celadon was unable to address our significant liquidity constraints through asset sales or other restructuring strategies. Therefore, in conjunction with our lenders, we concluded that Celadon had no choice but to cease all operations and proceed with the orderly and safe wind down of our operations through the Chapter 11 process.”

A source told WTHR that 3,000 truckers across the country are jobless on Monday morning, and many are stranded on highways with no money for fuel as gas cards have been shut off.

Over the weekend, rumors of Celadon’s collapse spread on Facebook like wildfire. Reports of truckers stranded on highways as their gas cards and maintenance contracts to service trucks were shutoff.

Some Facebook users offered their homes, a hot meal, and transportation for stranded truckers, considering Christmas is several weeks away. 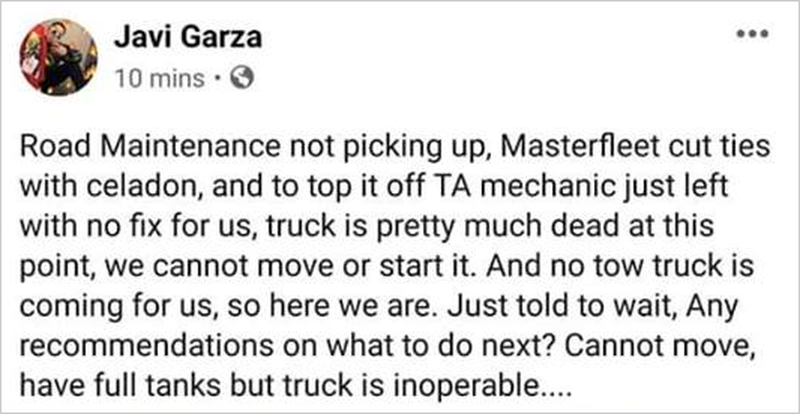 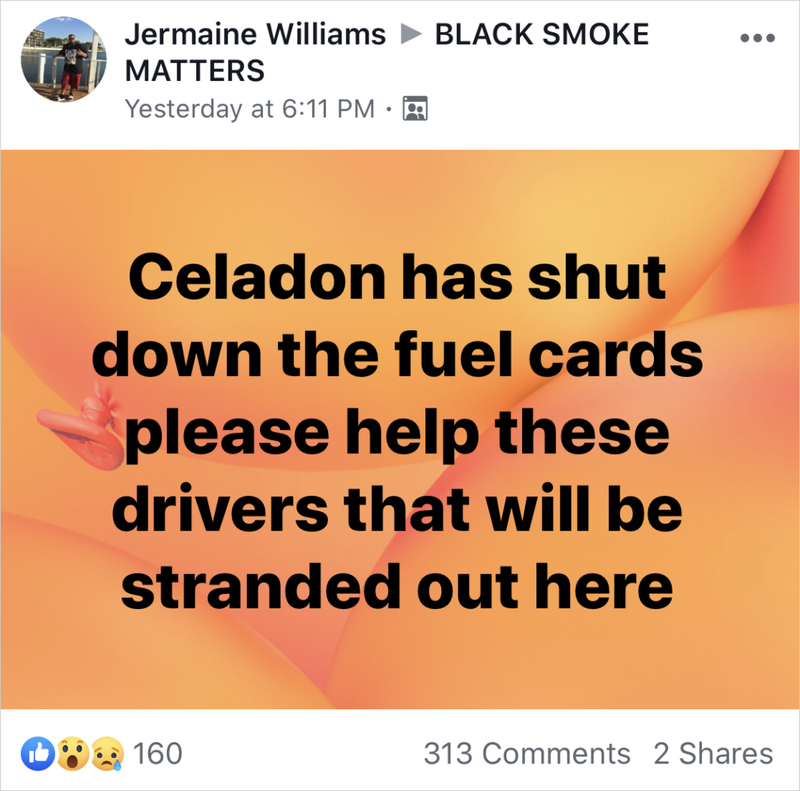 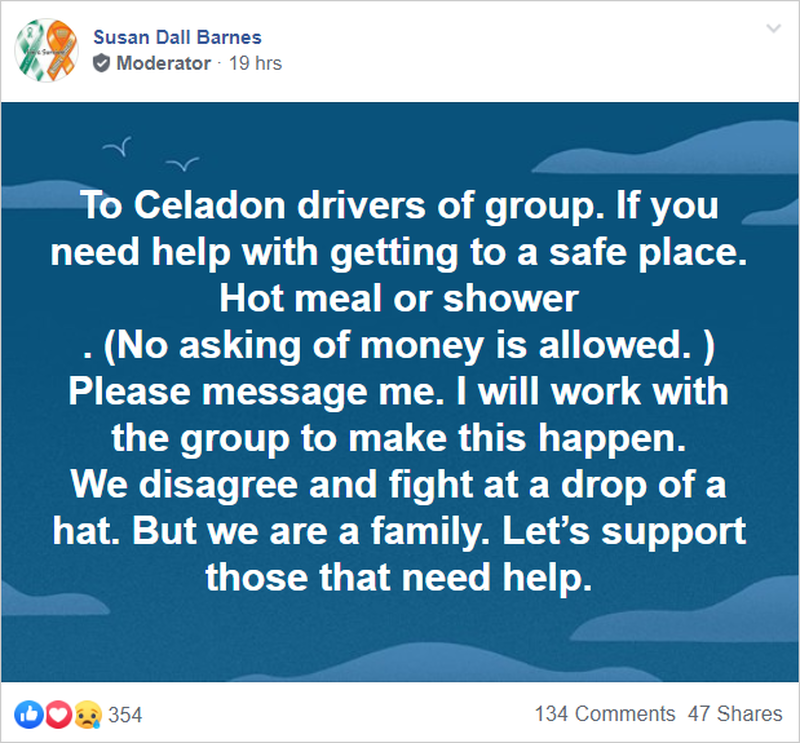 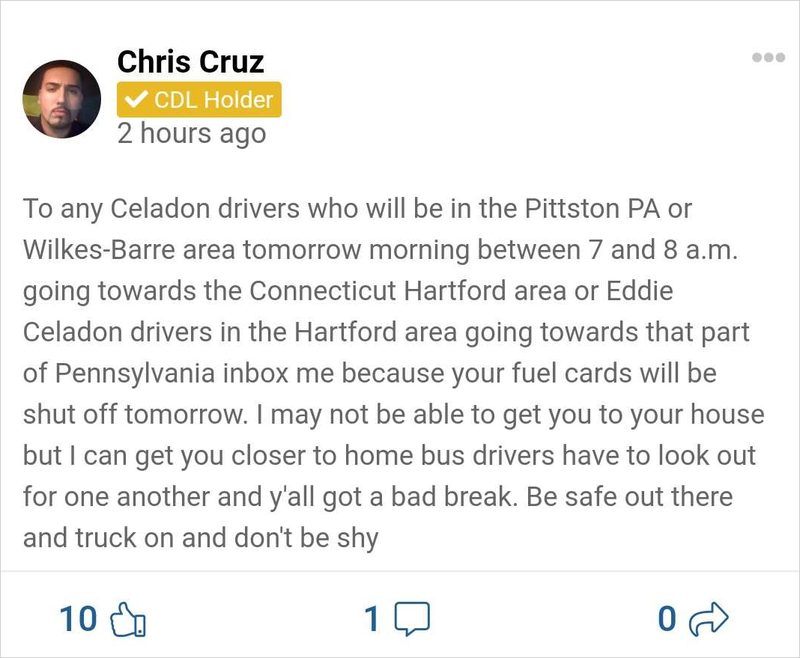 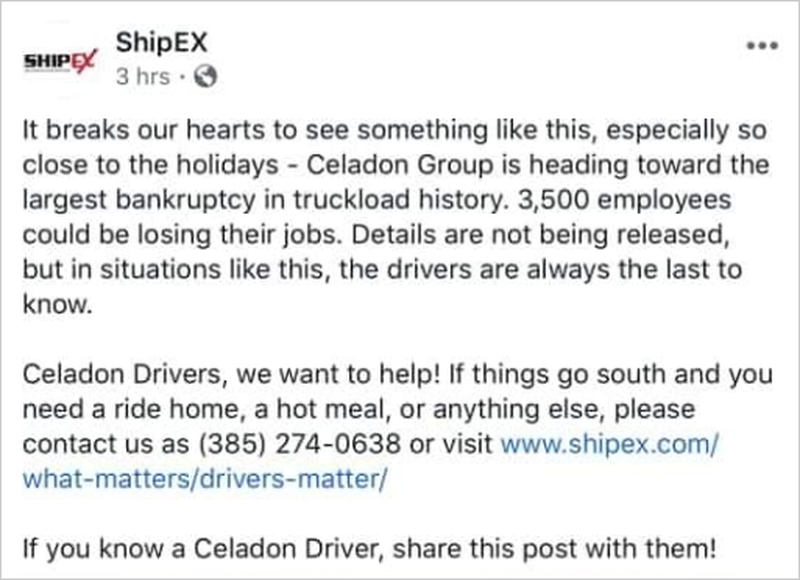 The collapse of Celadon comes after a grand jury indicted two former executives for cooking the books.

As previously reported, the manufacturing recession triggered a freight slowdown in 2019. 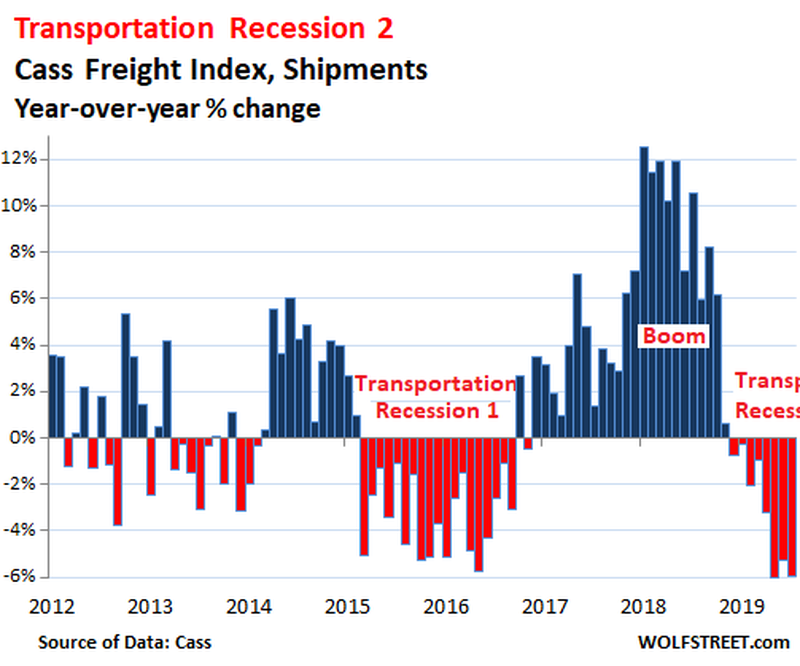 With the overall economy rapidly decelerating through Q4 and likely into 1Q20, the trucking bust will likely get more severe.

As for the stranded Celadon truck drivers — some might not make it home for the holidays.

This article appeared at ZeroHedge.com at:  https://www.zerohedge.com/markets/largest-truckload-carrier-bankrupted-leaving-3000-truckers-jobless-many-stranded-highways