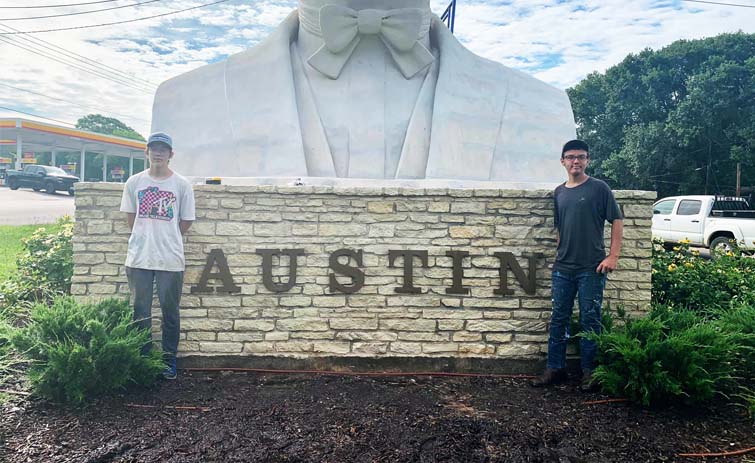 Austin County did not escape the turbulence that has ignited in America.  The bust of Stephen F. Austin, that you see upon entering Bellville, was desecrated with graffiti.  The words “F Racism” were spray painted on the bust as well as a few other areas of Bellville.

However, despite the act of vandalism being a dark spot on our area a ray of light shone through.  Two teenagers, Bellville High School Senior Alex Rodgers and Faith Academy Junior Dusty Rodgers, took it upon themselves to remove the graffiti off the statue and Thursday they were honored during the Bellville Economic Development Corporation’s monthly meeting.

Sergeant First Class Hatfield, the station commander for the Brenham Army Recruiting Station and a resident of Bellville presented the two young men with certificates acknowledging their service.

“When I saw what these two gentlemen did, I took it to heart.  I’m proud of what these two young gentleman did…The way these two stood up and did it, it speaks a lot for them.”

The young men were also honored by the Bellville EDC and presented certificates of appreciation and acknowledgement by the Executive Director, Larry Kuciemba.

You can view the presentation below beginning at the 01:30 mark of the beginning of the meeting:

The Bellville Police Department were also the first to acknowledge and making the area aware of the two young men’s actions by posting it on their Facebook Page with pictures stating:

“A great act of citizenship was demonstrated yesterday after the vandalism of the Stephen F. Austin statue this past weekend. Bellville High School Senior Alex Rodgers, and Faith Academy Junior Dusty Rodgers, took it upon themselves to clean the graffiti off of the statue. We thank the both of you!”

A great act of citizenship was demonstrated yesterday after the vandalism of the Stephen F. Austin statue this past…