In Bizarre Alliance, Russia Teams With The Taliban In ISIS Fight 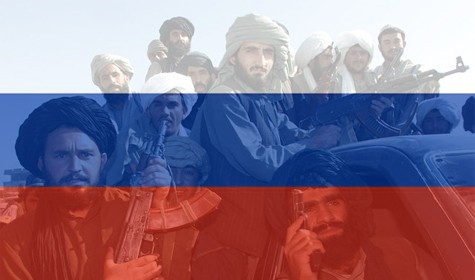 The fight to check the spread of Islamic State in Afghanistan is making for some strange bedfellows.

As we documented in “Russia Sends 10,000 AK-47s To Afghanistan As Government Mulls ‘Inviting’ Moscow To Help Fight ‘Terrorists’”, it’s become common knowledge in intelligence circles that Iran is arming and funding the Taliban. Although some say the weapons shipments date to at least 2007, Tehran hasn’t had the most amicable relationship with the insurgency, historically speaking. The Iranians are no fans of Sunni extremists and in 1998, Tehran threatened to destroy the Taliban in the space of “24 hours” in retaliation for the death of eight Iranian diplomats in Mazar-e-Sharif.

But between the US troop presence in Afghanistan and the rise of ISIS in the country, Iran’s interests are increasingly aligned with the insurgents. “Iran supplies us with whatever we need,” a Taliban commander told WSJ over the summer. “Afghan and Western officials say Tehran has quietly increased its supply of weapons, ammunition and funding to the Taliban, and is now recruiting and training their fighters, posing a new threat to Afghanistan’s fragile security,” The Journal wrote, adding that “Iran’s strategy in backing the Taliban is twofold, these officials say: countering U.S. influence in the region and providing a counterweight to Islamic State’s move into the Taliban’s territory in Afghanistan.”

In light of that assessment, we posed the following questions earlier this month “So who would Russia be fighting in Afghanistan if Moscow is invited and who will be on the receiving end of the 10,000 AK’s and helicopter gunships Moscow is set to send to Kabul? If those weapons can help the Afghan military roll back ISIS in the country, will Tehran cut off its support for the Taliban once the group is no longer useful?”

Now, we learn that the plot has thickened because as The Washington Post reports, the Russians are now sharing intelligence with the Taliban. Here’s more:

A Kremlin official said Wednesday that Russia was exchanging information with the Taliban, the Islamist insurgency that the United States has been fighting in Afghanistan since 2001, as a bulwark against the spread of the Islamic State militant group in that country.

Zamir Kabulov, a Foreign Ministry department head and President Vladimir Putin’s special representative for Afghanistan, told the Interfax news agency that “the Taliban interest objectively coincides with ours” in the fight against the Islamic State, which has captured broad swaths of territory in Syria and Iraq.

“I have already said earlier that we and the Taliban have channels for exchanging information,” Kabulov added, in remarks reported by Interfax and confirmed to The Washington Post by a ministry spokesman.

A limited partnership with the Taliban, which announced last week that it would send “special forces” to fight the Islamic State, is a striking, and somewhat confusing, twist in Russia’s war on terror. Although Russia plunged enthusiastically into its airstrike campaign against the Islamic State in Syria in September (critics say Russia is mainly there to prop up President Bashar al-Assad), Moscow has opposed the Taliban for more than a decade as a potential vehicle for terror and instability in the former Soviet Union.

The Kremlin’s US foreign policy critic extraordinaire Maria Zakharova assured the Post that cooperation between Moscow and insurgents was “limited” and confined to information sharing.

Remember, the Taliban grew out of the ashes of the Soviet-Afghan war and in 1996, the group castrated and hung Mohammad Najibullah, the man Russia installed as the country’s leader a decade earlier during the occupation.

In any event, the threat posed by ISIS apparently overshadows years of bad blood.

Obviously, this raises quite a few interesting questions in addition to those mentioned above. As WaPo goes on to note, any weapons Moscow sends to Kabul will “probably be used against the Taliban, which this week launched an offensive aimed at a strategically important district in Helmand province.” The Post is referring to the battle for Sangin, a town in Helmand province where some 2,000 Afghan forces have been killed or wounded in the past year.

So while Russia supplies the weapons the government uses against the Taliban, The Kremlin will at the same time share information with the insurgents. Additionally, it’s worth noting that the US and the UK are of course on the ground fighting alongside the Afghan army. One can’t help but wonder if the Russians, like their allies in Tehran, are secretly supporting the Taliban in an effort to make life difficult for the Western troops on the ground.

In the end, this is further proof of our contention that the conflict in Syria is merely one theatre for a world war that’s now being waged in at least four Mid-East states by at least ten countries and their proxies.

This article originally appeared at ZeroHedge.com at:  http://www.zerohedge.com/news/2015-12-24/bizarre-alliance-russia-teams-taliban-isis-fight