On Immigration and the Constitution 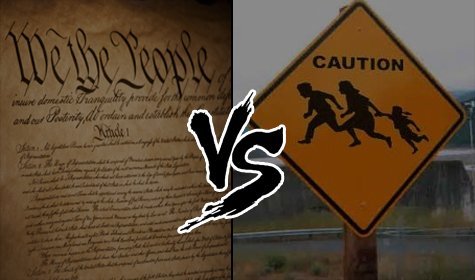 Article 1, Section 8 of the United States Constitution states that:

“The Congress shall have the power… to establish a uniform Rule of Naturalization.”

It does not give exclusive control over migration to the National Government. It is only entrusted with establishing a uniform rule of naturalization.

This is meant to be a check against the states, as it ensures that one state cannot offer citizenship at a lower requirement than another state simply to entice alien friends to migrate to their particular state.

Before proceeding further, it is important to define naturalization, migration and what it means to be an alien. For this, it is best to use source material from the time of the Founders.

Samuel Johnston’s A Dictionary of the English Language of 1755 defines these as such:

It is important at this point to point out that the National Government only has the power to establish the rules for naturalization and NOT to dictate to the states their policies regarding aliens. Simply put, the states then determine who is an alien friend and enemy vis-à-vis the 10th Amendment.

Each individual, sovereign state was to dictate from what countries aliens were allowed the migrate from, how long they could stay inside the state, if they could use the educational system and what, if any benefits would be conferred. This included social programs aliens may be able to access.  In modern times, this would be programs such as medicaid, social security benefits, and welfare benefits. Many will refer to court cases to refute this idea, such as Plyler v. Doe that granted ALL aliens the right to education, but this is judicial fiat made by activist judges, not solid law based on the original meaning of the Constitution.

A return to the founding generation’s ideals would permit California, for example, to set up a program wherein they allow a certain amount of alien friends to stay for a period of months to pick fruits and then return home, or North Dakota to allow alien friends to help with oil production and stay for a longer period of time (say two years). Each state would also have a system by which an alien can declare the intent to become naturalized, at which point, the National Government’s power, granted to it by the several states through the Constitution, would then apply. States would also have each alien friend documented within their state and could issue them identification stating their alien friend status.

All issues currently plaguing us can be solved easily if we remove the emotion and the fallacious arguments from our discussions and focus solely on what the Constitution directs.