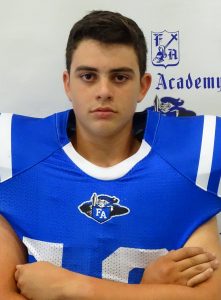 Faith Academy Knights hosted Austin Royals JV team Thursday night at Sab Stadium. The Knights played their best game of the year on both sides of the ball. The Knights came out on top with the victory, 79-52. Offensively, the Knights were once again led by their freshman Qb, Noah Figueroa, who acquired 284 yards passing, completing 19/22 passes, and also 71 yards rushing on 5 carries and adding 2 more Tds on the ground. Junior, Kaleb Shepherd, had a break out game as well, accumulating 7 TDs on the night; 1 rushing, 5 receiving, and also a Kickoff return for a TD. On the ground, he ran for 68 yards on 6 carries, and 11 catches for 199 yards through the air. In the backfield, Junior, Caden Swierkowski, had some key blocks as well as a long run for 25 yards. Other Knights making catches on the evening, Josh Poorman (Sr.),  Luke Wicklien (Fr.) , Neil Johnston (So.), and Nathan Figueroa (Jr.). The Knights, overall, had 515 yards of total offense, besting their season-best by 180 yards. The offensive line, which consists of Neil Johnston, Nathan Figueroa, and Landon Snyder, did a tremendous job getting key blocks and pass blocking for the younger Figueroa. Defensively, the Knights were led by Nathan Figueroa, once again, making 12 tackles and an INT. Also with key tackles, Dusty Rodgers (Jr.) had 3, and Landon Snyder (Jr.) with 9.

The Player of the Week goes to Noah Figueroa (Fr.) for his outstanding offensive performance. He was responsible for 355 yards and 6 TDs. The 6’4’’, 225 lbs freshman made some key plays with his eyes and with his feet. Great game!

The Knights will have their last game of the season on Friday night, November 13th @7:00 at Sab Stadium to take on Mount Carmel. It will be parent night. Don’t miss the fun!