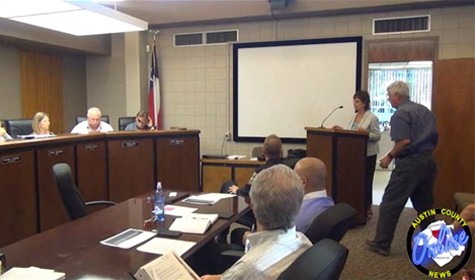 The City of Sealy will be the new place that the Friends of San Felipe will be storing their archeological items.  Previously, the items have been stored in Wallis but, with the construction of the new visitors center on the horizon for the San Felipe de Austin State Historic Site it is now time for the organization to move the items closer and start seeing which items will be needed.   Carolyn Bilski, the current president of the Friends of San Felipe historic site, stated that there is now money available for the historic ground breaking visitors site.  “We need to start going through, with staff, the items that are in storage…decide what’s appropriate for the historical museum, what would be appropriate for an agricultural museum, or other venues in Austin County.”

The resolution for this was item 19 on the City Council’s Agenda on their July 14th meeting and read:

A RESOLUTION OF THE CITY COUNCIL OF CITY OF SEALY, TEXAS, AUTHORIZING THE MAYOR TO EXECUTE AN AGREEMENT BY AND BETWEEN SAID CITY AND FRIENDS OF SAN FELIPE DE AUSTIN STATE HISTORIC SITE; REPEALING ANY POLICIES AND PRACTICES, WRITTEN OR ORAL, INCONSISTENT OR IN CONFLICT WITH THIS RESOLUTION; TO BECOME EFFECTIVE ON JULY 14, 2015.

There were some insurance considerations that were agreed to be ironed out but, the council approved the use of the Sealy Facility unanimously.