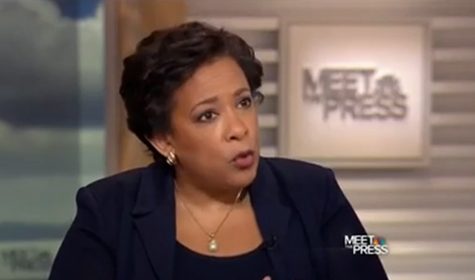 As we explained previously, The DoJ has censored all references to Islamic Terrorism from the following 911 call transcript…

In the ongoing war of words between president Obama on one hand, who has repeatedly said that Orlando shooter Omar Mateen was “self-radicalized” and was not influenced by Islamic elements, and Donald Trump prominently on the other, where the Republican presidential candidate has repeatedly alleged that Mateen’s actions were provoked by “radicalized Islam” which has prompted Trump to renew his calls for a temporary ban on Muslim immigrants as well as profiling Muslims already in the US, it appears that the president is about to get some much needed help from none other than the Department of Justice, which will step into the debate, by releasing Mateen’s 911 transcripts however only after heavy edits which censor and remove all references to Islamic terrorism.

As RealClearPolitics writes, in an interview conducted earlier today with NBC’s Chuck Todd, Attorney General Loretta Lynch said that on Monday the FBI will release edited transcripts of the 911 calls made by the Orlando nightclub shooter to the police during his rampage. One minor matter: the transcripts will be heavily edited.

“What we’re not going to do is further proclaim this man’s pledges of allegiance to terrorist groups, and further his propaganda,” Lynch said.

“We are not going to hear him make his assertions of allegiance [to the Islamic State].” Why: so Obama’s statement that he was “self-radicalized” will preserve credibility.

Here is the interview from Real Clear Politics:

So, with that in mind, we have replaced any mention of ISIS with ‘Hello Kitty’ to ensure no feelings are hurt during the reading of this transcript (via NBC News)

Orlando Police Dispatcher (OD): Emergency 911, this is being recorded.

Shooter (OM): In the name of God the Merciful, the beneficial [in Arabic]

OM: Praise be to God, and prayers as well as peace be upon the prophet of God [in Arabic]. I let you know, I’m in Orlando and I did the shootings.

OM: My name is I pledge of allegiance to [Hello Kitty].

OD: Alright, where are you at?

OD: Where in Orlando?

(While the FBI will not be releasing transcripts of OPD communication with victims, significant information obtained from those victims allowed OPD to gain knowledge of the situation inside Pulse.)

4:29 a.m.:       As victims were being rescued, they told OPD the shooter said he was going to put four vests with bombs on victims within 15 minutes.

(An immediate search of the shooter’s vehicle on scene and inside Pulse ultimately revealed no vest or improvised explosive device.)

Based on OPD radio communications, there were no reports of shots being fired inside Pulse between the initial exchange of gunfire between responding officers and shooter, and the time of the final breach. During this time, the shooter communicated with an OPD 911 operator and an OPD crisis negotiator, and OPD radio communications reported that victims were being rescued.

Finally, as AP reports, The FBI had the following shocking statement:

Orlando nightclub gunman was not directed by foreign terror group; was radicalized domestically.

This is all we have to say to that…

This article appeared at ZeroHedge.com at:  http://www.zerohedge.com/news/2016-06-20/fbi-releases-censored-orlando-911-call-transcripts