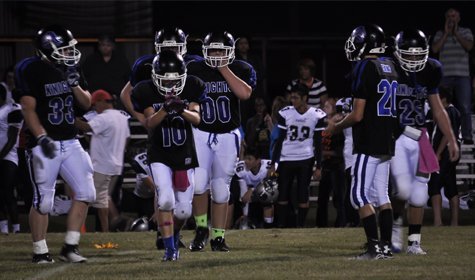 On October 17th the Faith Academy varsity football team took to the field in their first game of the season against sixteen Texas Christian Tigers.  The “Super Six,” as they’ve become known, are the entire team.  The Knights received the kickoff.  Junior Troy Herring (Bellville) did a good job faking a couple of runs for pass completions to move the ball downfield, then threw a pass to Jake Ewing (Hempstead), who ran it in for the first touchdown of the game.  Two series later the Tigers scored, then continued with two more unanswered TD’s, making the score 6 – 24. Then, the unthinkable happened.  Herring left the game early in the second quarter.  Iron Man Football at Faith took on a whole new meaning. Senior Reggie Brown (Wallis), Juniors Ewing and Grayson Shackelford (Bellville), Sophomore Will Woods (New Ulm), and Freshman Travis (T.J.) Wilson (Waller) sucked it up and played on.  They played tough and they played with resolve.  It was ugly at times but they held up well and made it to half time with a score of 6 – 40.  The five of them played offense, defense, and special teams – every play, no rest. One of the highlights was, as always, Shackelford’s enthusiasm.  He’s running, he’s jumping, he’s encouraging his teammates with his pure joy for the game.  He’s a talented player and hard worker on top of his amazing attitude.   Shackelford’s defensive play was impressive throughout the game with consistent tackling and his ability to prevent much larger players from catching their passes. Downtown Reggie Brown had a great offensive night.  He ran roughshod over anyone in his way, barreling through the defensive line to pick up 3 yards here, 7 there, until a first down was reached.  It was his first game in two years and you could see how much fun he was having.  He averaged 6 yards a carry, leading to multiple first downs. T.J. and Will are big boys.  They don’t have a lot of football experience but they have determination and are willing to put themselves out there.  They practice, practice, practice and both gutted it out in an admirable show.  Will caught a 10 yard pass from Herring early in the game and stayed on top of the important tackles throughout.  T.J., our center, worked hard and did his job extremely well.  He consistently got the snaps off, setting the offense up for success and it doesn’t get much better than that. Ewing, named FA’s Player of the Week, took control of the team early.  At the beginning of the 3rd quarter he ran in a 50 yard TD and Shackelford scored the extra point.  The score was now 13 – 48 and the Knights were looking good.  In the next series of downs Ewing ran in another TD for 51 yards as well as the extra point.  He had an impressive total of 208 yards rushing and receiving and scored 20 of the Knight’s 21 points. The crowd was on its collective feet screaming, excited by the 21-48 comeback.  The Tigers were still playing tough, not taking it easy on FA in light of the uneven matchup, but with a great degree of good sportsmanship and class. The Knights huddled up, then Ewing took off his helmet and walked to the sideline to talk to the coaches.  Everyone followed.  Brown and Shackelford were both hurt and Ewing made the decision to end the game; two of the six friends had had enough for one night.  Coaches Kenneth Woodley and Chuck Tomlinson’s had no objections and told the boys that they couldn’t be more proud of them. Join the 4-0 JH Knights at 5:00 and the Varsity team at 7:00 on Friday, October 24th in Brenham for their annual gridiron battle with Brenham Christian.