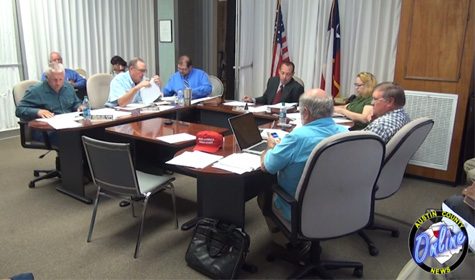 How should money be split among the precincts of Austin County?  Should it be by population or should it be by road miles?  This has been a topic of contention for quite a while in Austin County.  The trouble is there are valid points on both sides of the discussion.

Is it fair that the more heavily populated areas of Austin County pay the majority of the tax for road and bridge but, then to have to share that money with the lighter populated areas of Austin County?  Or is it fair for commissioners to have less money to utilize when they have a higher share of the road miles in the county?  The answer obviously depends greatly on what side of the argument you are on, where you live in the county, and how it affects you.

During this part of Commissioner’s Court, the public was allowed to speak were allotted 3 minutes each.  Once the public spoke Judge Tim Lapham started off the discussion.  “I keep hearing what is fair, what is fair…is it to collect money from each one of you and give it to you by the roads that you drive?  The distance that you drive?  Or let you spend the money, spend your own money?  In my mind, and I’m not going to vote this way, but in my mind the money that you take from your taxpayers in your district, you ought to get to spend in your district; in your precinct.  That cuts precinct 2 the hardest.  I’m not in favor of that.”

He went on to explain he had gotten several phone calls from people on the matter but, when asked what they wanted him to do about it, the callers would tell him to do what was fair and what was right.  He even had one person tell him to wait a year or two and use it as a campaign issue.  “That’s not what I’m here for.  I’m here to do what’s right and what’s fair.” Lapham said.

He then handed out sheets of paper with several proposals that had been previously viewed with the addition of one more.  The road and bridge money, after the administrative part was removed (the part that pays the commissioner’s salary and benefits), was to be divided by 4.  Then the FM and Lateral money was divided by road miles (as it is currently done).  And this breakdown was the one that Lapham said that he was going to vote for.  He then opened the floor for discussion.

The video below covers the entire discussion of the court and subsequent vote.  For easier viewing, here are the time stamps for the video: