Burglary of the ATM Machine at Industry State Bank 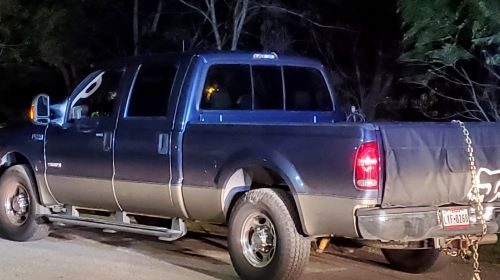 The Austin County Sheriff’s Office is investigating the burglary of an ATM machine at Industry State Bank in the early morning hours of October 20, 2020.

About 3:00 a.m. that Tuesday, at least three subjects broke into the ATM machine at the drive thru at Industry State Bank.  The suspects used a blue Ford F250 pickup to tear into the machine

The driver remained in the vehicle while two others hooked a chain to the ATM to rip it apart. All the suspects wore hoodies and gloves.

The suspects stole the cash from the cash boxes in the machine.

Officers located the abandoned blue Ford F250, which contained the cash boxes from the ATM, a couple blocks away behind Tegler Chevrolet.

The four-door Ford F250 had been stolen from a Prairie View apartment complex earlier that morning.

Surveillance video shows a silver four-door SUV with dark rims traveling with the stolen truck.  It appears the suspects drove from the scene on Hwy 159 East towards Bellville.

Sheriff Jack Brandes said this burglary is being investigated by the Austin County Sheriff’s Office.  Inv. Charles Holmes collected evidence at the scene to be analyzed by the DPS lab.

Deputies are seeking videos from surveillance cameras at other homes and businesses to identify the blue Ford F250, the silver SUV vehicle, or any other vehicles used by the thieves.