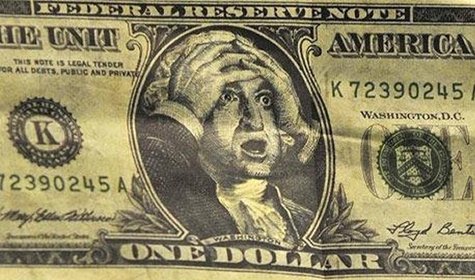 The US government ran a budget deficit of $659.59 billion in March, pushing the budget shortfall to a record $1.7 trillion through the first half of fiscal 2021, according to the Treasury Department’s Monthy Treasury Statement.

The March budget deficit ranks as the third biggest monthly shortfall in US history, driving Uncle Sam the biggest half-year deficit ever.

Prior to last year’s stimulus-fueled $3.13 trillion deficit, the US government had only run annual deficits over $1 trillion four times, all during the Great Recession. Uncle Sam is already on the fast track to $2 trillion with six months left in the fiscal year. The previous record deficit for the first six months of a fiscal year was $829 billion set back in 2011. Meanwhile, Treasury receipts in March came in at just $267.61 billion. That was a 13% increase over last year but didn’t come close to covering the massive spending spree.

And keep in mind, we’ve only just begun to see spending approved in the $1.9 trillion “American Rescue Act” come down the pipeline.

On March 1, the US national debt eclipsed $28 trillion for the first time. Currently, that represents $85,255 of debt for every American citizen.

According to the National Debt Clock, the debt to GDP ratio stands at 130.02%. Despite the lack of concern in the mainstream, debt has consequences. Studies have shown that a debt to GDP ratio of over 90% retards economic growth by about 30%. This throws cold water on the conventional “spend now, worry about the debt later” mantra, along with the frequent claim that “we can grow ourselves out of the debt” now popular on both sides of the aisle in DC.

As Peter Schiff put it in a tweet, all of this government comes at a price.

We didn’t get $659 billion worth of government spending for free. The public will pay the balance through the inflation tax. That means consumer prices are headed much higher.”

The inflation tax will hit us as the Federal Reserve monetizes this massive debt.  That means more bond purchases and more money printing.

The Federal Reserve makes all of this borrowing and spending possible by backstopping the bond market and monetizing the debt. The central bank buys US Treasuries on the open market with money created out of thin air (debt monetization). This creates artificial demand for bonds and keeps interest rates low. All of this new money gets injected into the economy, driving inflation higher. We see this playing out before our eyes as the Fed continues to expand the money supply by record amounts.

The Fed had worked itself between a rock and a hard place. It has to print trillions of dollars to monetize the massive deficits. But that is causing inflation expectations to run hot. That is putting upward pressure on interest rates. But you can’t have rising rates when your entire economy is built on debt. The only way the Fed can hold rates down is to buy more bonds, which means printing more money, which means even more inflation. You can see the vicious cycle. At some point, there is a fork in the road and the Fed will have to choose. Step up and address inflation and let rates rise, which will burst the stock market bubble and collapse the debt-based economy, or just keep printing money and eventually crash the dollar.

This article appeared at SchiffGold.com at:  https://schiffgold.com/key-gold-news/budget-deficit-surges-to-record-1-7-trillion-in-just-six-months/