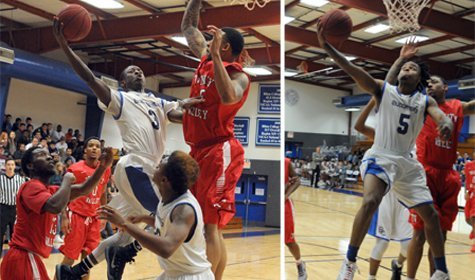 BRENHAM, Texas – Blinn College men’s basketball could not find a rhythm offensively and was held way under its normal points per game average in a 92-79 loss to No. 11 Trinity Valley Community College Tuesday night inside the P.E. Building.

Coming into the game, the Buccaneers were averaging 117.3 points per game but Trinity Valley disrupted the Blinn offense just enough. Blinn’s record now lowers to 8-1 overall and 1-1 in Region XIV play.

“I thought we had a lot of key turnovers in the first half and when you play against a good team then you can’t give them extra buckets,” said Blinn head coach Scott Schumacher. “I thought we missed a lot of shots that we normally make but it’s a learning experience.”

Corey Henderson and Morris Dunnigan each led the Buccaneers with 17 points while Victor Dukes had a strong second half and ended up with 15 points. John Dewey had a balanced game and scored 13 points. Trinity Valley was led by Josh Stamps with 21 points on mostly outside shooting.

Trinity Valley jumped to a 16-6 lead to open the game but Blinn was able to battle back momentarily. Balanced scoring early on helped the Buccaneers take an 18-17 lead after a jump shot by Dewey with 11:58 left in the first half.

Trinity Valley was able to get the lead right back to double-digits at 32-20 at the 8:12 mark and held on to lead 46-36 at the break. Dunnigan led the Buccaneers with eight points in the first 20 minutes.

Blinn was unable to cut the Trinity Valley lead to single-digits in the second half, even with strong performances by Henderson, Dunnigan and Dukes. Henderson scored 10, Dunnigan had nine and Dukes scored eight but Blinn still fell by 13 to Trinity Valley.

Blinn will back at home on Monday, Nov. 30 against Concordia University JV at 7:30 p.m.