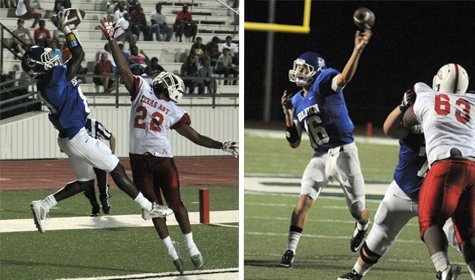 BRENHAM, Texas – Defense was solid all game and the offense showed flashes of brilliance for Blinn College football in a 38-3 dismantling of Texas A&T Saturday night at Cub Stadium in Brenham to move to 2-0 on the season.

Caleb Hill got the bulk of the snaps at quarterback and he seemed to feel comfortable on his old high school field in completing 16-of-25 passes for 245 yards and four touchdowns. William Howard, Taylor Givens, Doug Johnson and Dillon Birden each hauled in a touchdown reception for the Buccaneers in the victory.

“I always say that the offensive line needs to block well to win and they did great tonight,” said head coach Keith Thomas. “We gave Caleb a lot of playing time tonight and the line gave him time to stand back there in the pocket and read the defense.”

It wasn’t only the passing game getting going as the Buccaneers rushed for 257 yards as Brandon Jackson scored the lone touchdown on the ground and Chris Hutchings led the balanced attack with 69 yards on four carries.

Blinn stalled on its first and second drives but Hill was able to find his targets on the third possession for the Buccaneers. Hill completed all four passes on the 53 yard drive that was capped with a touchdown toss to Birden for a 7-0 lead with 3:01 left in the first quarter.

Hill struck again late in the first half completing all three passes on the drive and capping it off with a 28-yard strike to Howard for a 14-0 lead that would hold up until halftime. The Blinn offense wasn’t always pretty but the defense did a good job of keeping Texas A&T away from the end zone.

“We were more hungry as a defense and had more drive in our second game than we did in our first,” said Blinn cornerback Ben Sutton. “We just executed and made some good plays on defense.”

Offense eventually picked up the pace as Blinn built a lengthy 13-play drive on its second possession of the second half. Hill found Johnson to cap the drive with a 20-yard touchdown pass and a 21-0 lead.

The scoring just continued on the following drive with Hill again finding his targets near the opponent’s end zone. Hill found another touchdown strike to his fourth different receiver, this time Givens went up for a touchdown catch of 16 yards for a commanding 28-0 lead late in the third quarter.

“The beginning of the game was a little quick but I was able to slow myself down a little bit and play better after an interception,” Hill said after the game.

From there Blinn was looking to drain the clock and added a Eric Piccione field goal and a rushing touchdown from Jackson to make the score 38-0 late in the fourth. Texas A&T did kick a field goal in the final minutes to get rid of the goose egg on the scoreboard but Blinn still cruised to a 35-point victory.

Blinn will open up the conference slate on Sept. 5 against Tyler Junior College on the road at 7 p.m. The game will be played at Lindale High School.

Blinn has competed in intercollegiate athletics since 1903 and captured 32 NJCAA national championships since 1987. For more information, visit: www.buccaneersports.com.

Slow Start Hinders No. 13 Blinn In SWJCFC Loss To No. 12 Navarro