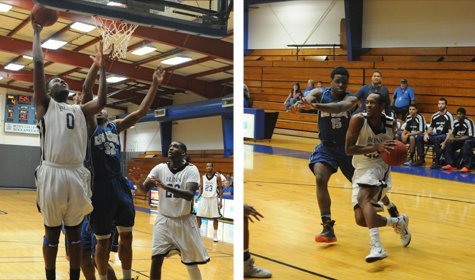 BRENHAM, Texas – Blinn College men’s basketball saw a lot of different defensive looks from Lone Star College-CyFair but the Buccaneers were still able to run their offense and come away with a 91-70 victory Nov. 29 in Brenham, Texas.
“It was good for us to see a half-court trap and play against it,” said Blinn head coach Scott Schumacher. “You can put stuff in during practice but until you play against it in a game you don’t know how the team is going to react. I thought our guys did a good job of staying within what we were trying to do.”

The Buccaneers offense stuck around over the holidays as Blinn enjoyed balanced scoring in the non-conference victory. Revey Norton led the way with 16 points, as 14 of those points were scored in the first half when CyFair put on the most pressure.


“They had some good pressure but we just had to stay together as a team and move the ball,” Norton said after the game. “Coach is always telling us to not panic when we see pressure and just play basketball.”

Ja’Cardo Hawkins was a force in the second half as he scored 10 of his 14 points in the latter half to reach double figures. Jalan McCloud scored 11 in the win while Trey Edwards Rick Curry also chipped in with 10 each.

Norton handled the pressure with ease in the first half as CyFair threw a half-court and full-court press on Blinn but Norton was able to weave his way around defenders for 14 first half points and the Buccaneers was as high as 18 in the first half.

McCloud was a big reason that Blinn jumped out to a lead as he scored seven points early on to help Blinn hold a 43-25 lead at the break.

After a somewhat quiet first half, Hawkins broke through in the first 12 minutes of the second half with 10 points as his hustle and determination helped his get his 10th point on a 3-point play for a 71-48 lead with 8:03 left in the game.

The big men dominated the second half for Blinn as Edwards chipped in eight points as he was able to grab a handful of offensive rebounds and keep CyFair at a safe distance for the remainder of the game with his scoring.

With the win, Blinn College improves its record to 6-2 overall and the Buccaneers are 1-1 in conference. Blinn will be back in action Dec. 2 against Concordia College JV at 7 p.m. in Brenham.