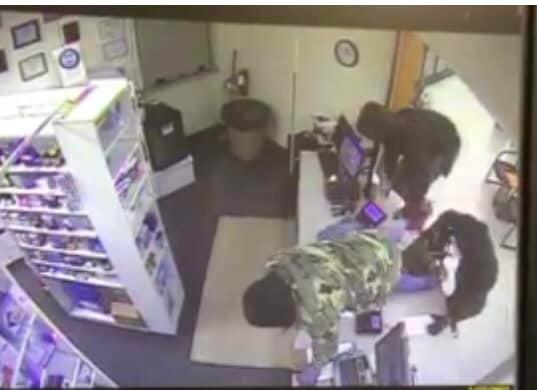 The local Austin County Police Agencies are seeking the publics help in identifying perpetrators who broke into the Bellville Brookshire Brothers Pharmacy.  The event happened at 12:07 AM this morning where three subjects wearing masks forced their way into the back part of the Brookshire Brothers Store located at 720 S Front St, Bellville, TX.  The perpetrators then made their way to the front of the building and broke into the store’s pharmacy.  They were unable to get anything of value and were gone in just around 2 minutes before officers arrived.  The Austin County Crime Stoppers is asking for any help in identifying these suspects.  You can contact them at (979) 865-2949.

Here is the full press release:

“At 12:07 AM this morning, 3 subjects wearing masks and gloves forced entry into the back of Brookshire Brothers sounding the alarm. The subjects made their way to the front of the building and broke into the store’s pharmacy. Due to limited time, they were unable to retrieve anything and were in and out of the store within 2 minutes. They subjects fled the scene just prior to law enforcement arriving. If anyone has any information on who the subjects may be, please contact Austin County Crimestoppers at 979-865-2949. Thank you!”

Below is the notice that was put out by the Bellville Police Department via their social media page with images from the stores security camera: